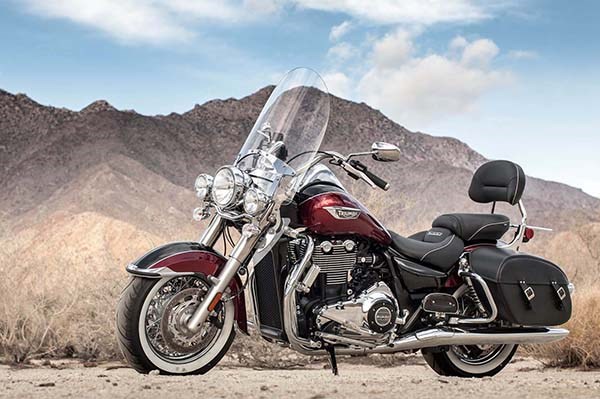 British motorcycle specialist Triumph is on quite a roll in India. They opened shop less than a year ago in November 2013, since when there’s been no looking back. The line-up this far has been well received by Indian enthusiasts, with 10 bikes offered from day one, and their acclaimed, award-winning supersports category bike, the Daytona 675 added a few months down the line.

Triumph’s twelfth motorcycle for India is the Thunderbird LT, ‘LT’ standing as short for Light Tourer. The Thunderbird LT is a mammoth-sized, macho cruiser bike, built with a high-quality air around it — acres of chrome and several neat classic touches, including mega-size whitewall tyres, supported by sparkling spoke construction wheels.

The Thunderbird LT is powered by a liquid-cooled, 1699cc, parallel-twin powerplant, that Triumph claims is the largest parallel-twin engine available on any series production motorcycle today. A tidal wave-strong 14.9kgm of peak torque is delivered at just 3,500rpm, so expect strong, flowing power from just off idle engine speeds. The big Thunderbird LT is fuel-injected, and delivers 94bhp power at 5,400rpm. That power is delivered to the rear wheel via belt drive, a silent operating system that’s used on virtually every Harley cruiser bike, and proven more apt for Indian riding conditions than a metal construction drive chain. The Thunderbird LT uses a six-speed gearbox.

Triumph has priced the big Thunderbird LT at Rs 15,75,000 (ex-showroom, Delhi), which makes this an undoubtedly premium motorcycle to pick up in India, having said which, you can expect top-notch quality, and an excellent riding experience to rival the best Harley-Davidson has to offer. The heavy cruiser segment is hotting up in India, with another manufacturer Indian all set to bring its new Scout into the market a few months from now. Watch this space.