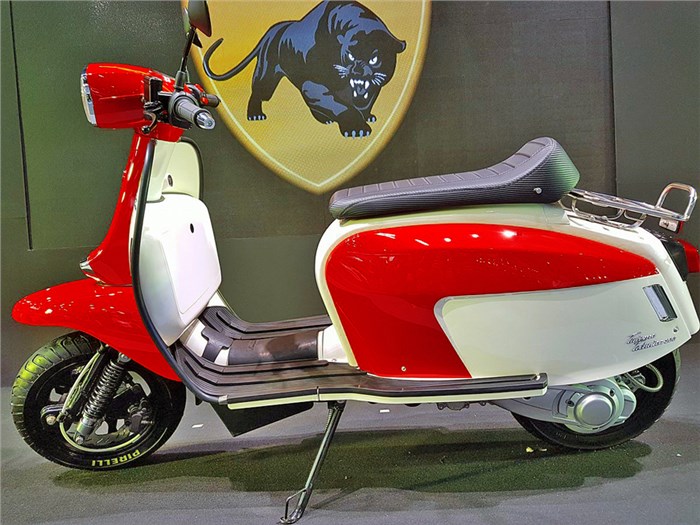 Bespoke British scooter manufacturer Scomadi is all set to enter India. The brand produces Lambretta GP-styled models like the Turismo Leggera 50, TL125, TL200, Turismo Technica 125 and TT200i. It once manufactured its scooters in collaboration with a Chinese establishment but soon moved operations to Thailand in its quest for higher quality standards.

For its Indian debut, Scomadi has joined hands with Pune-based AJ Performance, a one-stop facility which offers bespoke customisation, maintenance and sourcing of parts for luxury and performance cars. AJ Performance is lead by Alexander Johnson, a popular figure in high-end car circles in western India.

WHO IS SCOMADI?
The company, founded in 2005, is the brainchild of Frank Sanderson and Paul Melici – scooter industry veterans in their own right – and has been actively producing a small but exciting range of scooters since 2013. Scomadi has produced hand-built, limited-edition scooters since 2009, although its mass-production scooters are what have made the marquee a popular name in the European and Asian markets. For those of you curious about the name, well, Scomadi is literally a glued-together term for ‘scooter manufacturing and distribution’. Couldn’t have been simpler, eh?

WHICH ONE’S COMING TO INDIA?
To begin with, Scomadi will introduce the TT125 in India. The scooter has already completed homologation formalities and the first batch of the model is expected to arrive in India by May 2018. With AJ Performance being officially appointed its first distributor in the country, the Scomadi TT125 will be imported as a CBU from Thailand (where it is produced). Buyers would have the option of picking a colour option from the available stock or ordering a customised unit, which will take roughly three months to arrive from the time of placing the order. The scooter shown in the image is the TT200 and the India-bound TT125 will sport identical styling.

Customisation is one of the highlights of the Scomadi range and this includes bespoke paint schemes/combinations, personalised effects and more. There’s also an impressive accessory range that includes windscreens, seats, luggage racks and protective guards, among other things.

WHAT’S THE TT125 ALL ABOUT?
The TT125, to elaborate, is powered by an Aprilia-sourced 125cc engine that’s made in Italy and shipped to Thailand, where it gets mounted onto the frame. However, this is not the same unit as on the SR 125; it has completely different bore/stroke dimensions as well. This air-cooled motor with a CVT transmission runs a Delphi fuel-injection unit, and Scomadi claims an impressive output figure of 11hp at 7,300rpm. This is clearly superior to mass-market 125s such as the TVS Ntorq 125 and the Aprilia SR 125. While the TT125 doesn’t feature ride-by-wire, Scomadi has developed an ingenious system to boost throttle response, although we are yet to learn the details about this aspect. Additionally, with an optional remap and exhaust upgrade, the TT125 can be hopped up to produce an even more promising (claimed) 15hp! The TT200, which isn’t being offered in India at the moment, boasts a claimed 15.5hp figure. Its motor, though, is an in-house developed one and doesn’t have its roots in Aprilia.

It’s the cycle parts that really set the TT125 apart from the rest, however. To begin with, the TT125 features two hydraulic preload adjustable shock absorbers with coil springs (and a gas-assisted anti-dive linkage system) – not the same as a telescopic fork but it hints at far plusher ride characteristics than a trailing link unit (while also helping it retain an old-school appearance). At the rear, it gets a coil spring with a four-step preload adjustable shock absorber. A Nissin disc brake setup at either end is standard (220mm front/200mm rear) and so is a dual-channel ABS.

The TT125 runs a Pirelli Angel Scooter 110/70-12 tyre at the front and 120/70-12 tyre at the rear (both tubeless), mounted on alloy wheels. The chassis is a tubular space frame unit and it uses stainless steel (SS 309) bodywork, while the front mudguard is made out of carbon. Interestingly, the TT125 sports a 773mm seat height (the Aprilia SR 150 is set at 775mm) and claims a mammoth 330mm of ground clearance – the TVS Ntorq, for example, offers only 155mm of ground clearance. We suspect this could also be a difference in the method of measurement. It also features a rather generous 11 litres of fuel tank capacity, far higher than on any mainstream scooter on sale in the country. However, with its 100kg dry weight, it’s also set to be one of the heaviest.

In exchange for the timelessly cool looks, Scomadi does expect you to go easy on the practicality demands, however. Case in point being the complete lack of underseat storage – the fuel tank hogs all of it – although you do get a lockable compartment up front (like on the old school geared scooters we’ve had our fair share of) and also a luggage carrier at the back. Moving on, it gets a retro-styled single-pod fully-digital instrument cluster which features a speedometer, a tachometer, a trip meter, a fuel gauge and tell-tale lights for the headlight beam positions and turn-signal indicators. An engine-kill switch and hazard lights (both mounted on the RHS handlebar) are standard, too, and so is a DRL housed within the rectangular full-LED headlight which gets a classy chrome surround. The tail-light is an LED unit as well, and is of the continuous glow (think Audi!) type.

WHERE CAN YOU BUY ONE?
At present, a visit to AJ Performance’s Pune outlet should help you make a booking right away. It is in the process of setting up an exclusive Scomadi dealership and workshop (including a paint booth for basic customisation) in Pune’s Lulla Nagar area as we speak and AJ Performance will, for the time being, be the exclusive distributor for Scomadi in India.

HOW EXPENSIVE WILL IT BE?
This may come as a shocker to you, but exclusivity and bespoke machines do come with a hefty price tag, don’t they? The Scomadi TT125 will wear a price tag of Rs 1.98 lakh (ex-showroom, Pune) without accessories – that’s twice as much as the most expensive Vespa in India – but for the price, you also sign up for an eternally racy and cool design, with the promise of exciting performance as well. For the impatient ones amongst you, AJ Performance will offer the TT125 in six preset colour options (which it plans to stock) that you can walk away with once deliveries commence, which should be within the next few months. Scomadi is also considering the bigger, more exciting (and definitely much more expensive) TT200 for India but its arrival depends on the kind of reception the TT125 receives.

While Scomadi is obviously not looking at a large volume share in India, the TT125 does look promising for a niche but growing faction of scooter enthusiasts. Given that Scomadi aims to offer a lifestyle product with a level of quality and performance (apart from the irresistibly cool styling, that is) that is claimed to be set far ahead of anything else offered in India so far, it sure seems worth the wait. Let us know what you think in the comments section below.