The Royal Enfield Classic 350 is set to receive its most significant update yet, with a launch expected in the next few months. 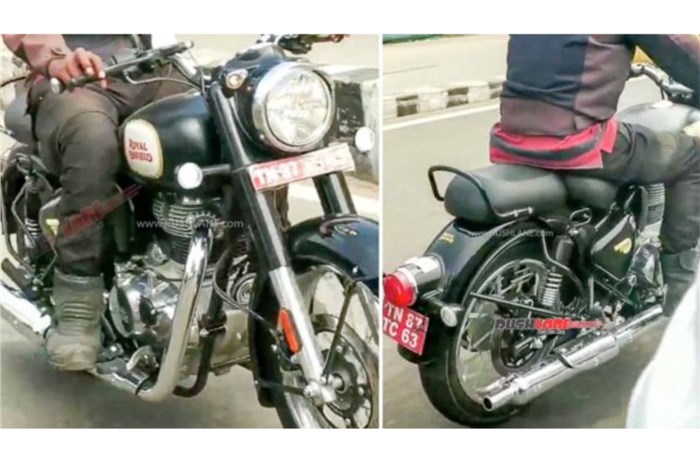 The 2021 Royal Enfield Classic 350 has been spied once again, and this time, the test mule has been caught fully undisguised. Previous spy shots have revealed what to expect from the upcoming motorcycle, and this one gives us a clearer view of what it will look like.

The Classic 350 is Royal Enfield's cash cow. 3,98,093 units of the motorcycle were sold last year, also making it the most popular offering in its price bracket. Unsurprisingly, with this new avatar, it appears Royal Enfield hasn’t strayed too far from a successful formula. However, there are some significant changes.

The 2021 Royal Enfield Classic 350 retains most of the current model’s design, including the  lengthy fenders and retro-style tank and side panels. However, there are some subtle changes, such as the inclusion of  a sleeker tail-light with a chrome bezel and a redesigned rear seat with rounded edges. The grab rail also appears to be raised, which seems to have been done to make it more ergonomic and enhance comfort for the pillion.

The upcoming Classic 350 will be built on the new, dual-cradle frame J platform that we’ve already seen on the Royal Enfield Meteor 350. This split chassis set-up will likely be the base for other future Royal Enfield models that are in the pipeline. This new video – like the earlier set of pictures – shows the all-new Classic 350 is equipped with front and rear disc brakes on the right-hand side, instead of on the left, as seen on the current model. This is a direct consequence of the new powertrain the next-gen Classic 350 will come with.

In terms of features, we know the bike will get the option of dual-channel ABS, just like the current model. The video offers a brief glimpse of the new Classic 350’s circular instrument cluster, but it remains to be seen how different it will be compared to the current bike’s unit. The addition of Royal Enfield’s Bluetooth-enabled Tripper navigation system will be great, but at this point, it’s unclear if the 2021 Classic 350 will get that feature.

The new Classic 350 will likely be powered by the same 349cc, fuel-injected engine we’ve seen on the Meteor 350. For the new engine, the old pushrod-valve system is replaced by a SOHC two-valve head, and while the engine remains air-cooled, there is an additional internal oil circuit within the cylinder head to aid cooling. This engine produces peak output figures of 20.2hp at 6,100rpm and 27Nm at 4,000rpm. You can click here to read our review of the Meteor 350, where we’ve also spoken about this new powertrain in depth.

We expect the 2021 Royal Enfield Classic 350 to be priced on par with – or slightly higher – than the current model, prices for which start at Rs 1.65 lakh (ex-showroom, Delhi). The bike was expected to go on sale earlier this year, but the pandemic seems to have delayed those plans by a few months. Now, given that the bike in this video looks production-ready, we expect the new Royal Enfield Classic 350 to be launched early next year.

What do you think of the new Royal Enfield Classic 350? Think it can replicate the success of the model it's about to replace? Let us know in the comments.