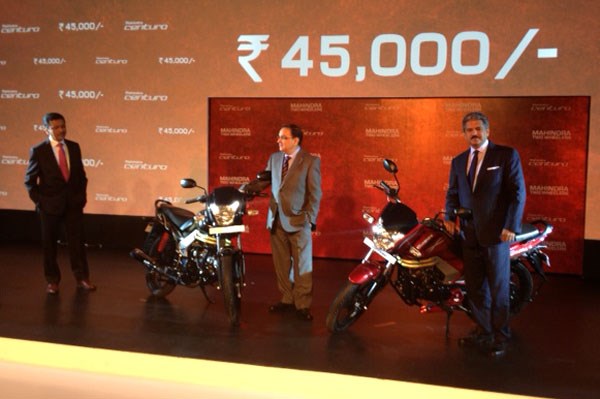 Mahindra 2-Wheelers has launched its Centuro commuter bike at a competitive price of Rs 45,000 (ex-showroom, Delhi). Close on the heels of their Pantero, the Centuro is Mahindra's next assault on the 110cc commuter segment, a relatively more up-market, feature packed bike. The Centuro comes with a raft of features never before available in the segment, and Mahindra are hoping this will allow their latest bike to catch the fancy of the Indian two-wheeler buyer.

The Centuro gets a sharply styled headlight unit upon which sits a dark tinted visor. Behind this sit comprehensive instruments showing an analogue tachometer, digital speedometer, odometer, trip meter, clock, service-indicator, economy-mode indicator and a distance to empty read-out. There’s still more, in a flip-to-open 96 bit encrypted key, this making it impossible to start the Centuro using a duplicate key. This key also enables riders to flash their motorcycle headlight when they want to locate it in the dark.

The Centuro also provides a ‘follow-me’ function that keeps the headlight illuminated a while after the ignition is switched-off to show its rider the way when it is dark. At rear the Centuro gets a smart looking LED taillight.

The Centuro engine is identical to the Mahindra Pantero as launched earlier this year. It uses a single-cylinder, four-stroke, air-cooled and 106.7cc engine. Maximum power is 8.4bhp at 7500rpm and peak torque, 0.87kgm at 5500rpm. The Centuro gearbox offers four-speeds.

The Centuro is held together by a twin downtube frame, using telescopic fork front suspension and adjustable shocks at the rear, bolted onto an old fashioned tubular steel swingarm. The motorcycle seats its rider in an upright riding position, as required by a city-commuter like this. The Centuro comes equipped with drum brakes.

Mahindra are getting set to launch another ten new two-wheelers over the next year. The first 10,000 Centuro bikes are being offered at an introductory price of Rs 44,000 (ex-showroom, Delhi). Yes, the Centuro is competitively priced, but will have to face down stiff competition by solid rival motorcycles including Hero’s Passion series commuter bikes, Bajaj’s Discover 100T and Honda’s new Dream Yuga.