Street-naked received the bookings in 25 days; deliveries set to begin from March 2019. 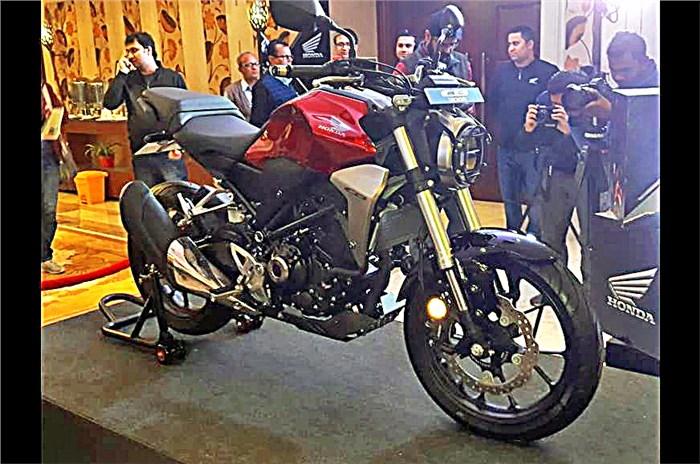 At the launch of the CB300R, Honda announced that it had already received three months’ worth of booking for the street-naked motorcycle. Honda has priced it at Rs 2.41 lakh (ex-showroom, India), which puts it in the competitive entry-level sports bike segment.

Yadvinder Singh Guleria, senior vice president – sales and marketing, Honda Motorcycle and Scooter India, said, “Honda has put the spotlight on the growing middleweight category and motor enthusiasts across India have responded. In just 25 days since the start of bookings, the CB300R is already booked for over three months, based on our current production plan”. While this is impressive, the company hasn’t given out an exact figure. This means, there could have been a limited-production plan to begin with.

The CB300R is being sold in India as a CKD (Completely Knocked Down) offering and is available across Honda’s 22 Wing World dealerships in the country for a booking amount of Rs 5,000. The company has also said that deliveries are set to begin from March 2019 onwards.

The CB300R has been tweaked slightly for the Indian market. While the bike uses the same 286cc, four-valve, single-cylinder, DOHC liquid-cooled motor that is paired to a 6-speed gearbox, the India-spec engine makes 30.4hp at 8,000rpm and 27.4Nm of torque at 6,500rpm. These figures are slightly lower than the UK-spec bike and the spec sheet of the India-spec CB mentions that it makes 1hp less at 8,000rpm (instead of 8,500rpm) and 0.1Nm of torque less at 6,500rpm (instead of 7,500rpm). The Indian model also uses Michelin Pilot Street tyres instead of the Dunlops found on the international-spec model. Its kerb weight of 147kg also makes the CB300R one of the lightest motorcycles in the segment.