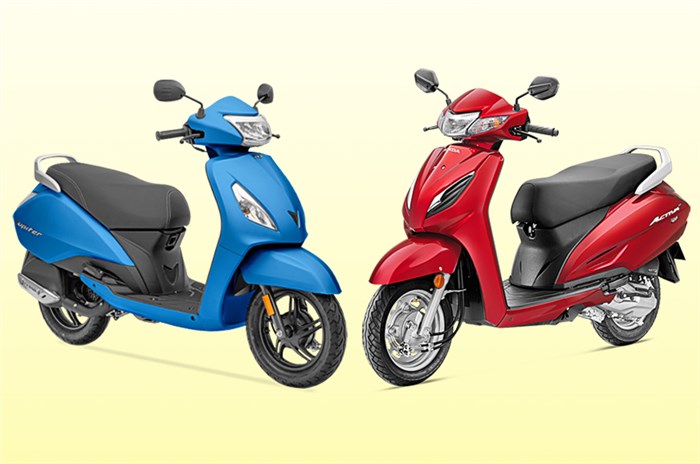 Despite the influx of new 125cc scooters in India, the biggest sales numbers continue to come from the 110cc models. The 110cc Activa’s numbers alone are higher than that of multiple 125cc models put together. While it does enjoy quite a lead, the Jupiter follows it in the 110cc space with an impressive sales number as well. Both scooters also target the same demographic, and in their latest avatars, they now conform to the BS6 emission regulations. Here’s how they compare on paper.

Like with Honda’s Activa 125 and SP 125, the engine on the Activa 6G is an all-new affair. It has a different bore and stroke and now uses fuel-injection instead of a carburettor. As with many BS6-compliant engines, power and torque have gone down – by 0.17hp and 0.21Nm, respectively. If you're wondering why that is happening, we have an explanation for you here.

While the engine on the BS6 Jupiter hasn't changed, it has switched from carburetion to fuel injection, and has seen a slight drop in power. It now makes 0.5hp less, while peak torque remains the same at 8.4Nm. This means that the Honda Activa 6G has a slight peak power and torque advantage over the BS6 Jupiter.

Both scooters are also very closely matched when it comes to their kerb weights, with the Activa 6G weighing just 2kg less than the Jupiter at 107kg. This gives the Activa 6G a power-to-weight ratio of 72.8hp per tonne as compared to Jupiter's 67.8hp per tonne.

While Honda is claiming that the Activa is 10 percent more fuel-efficient now, TVS claims that the BS6 Jupiter now delivers 15 percent better fuel efficiency. We will put these claims to the test as soon as we can. In our first ride review, which you can read here, we found the Activa to be a bit little sluggish, and we're keen to see what the Jupiter will be like in comparison.

The 110cc Activa was quite dated when it came to its underpinnings, but that has changed with the latest 6G variant. Honda finally ditched the dated front suspension set-up for a telescopic fork and larger front wheel. The scooter also has a revised frame and a longer wheelbase which promises to improve stability. That said, the Jupiter still has a longer wheelbase at 1,275mm in comparison to the Activa’s 1,260mm.

Speaking of the Jupiter, it always had a telescopic fork and 12-inch front wheel. In fact, it still has an advantage because it runs a 12-inch wheel at the rear as well, while the Activa makes do with a 10-inch unit. The rear shock absorbers on both offer preload adjustability.

These are the company’s more affordable models, which is why they aren’t equipped with even half as many features as say the Activa 125 or the Ntroq 125. However, they do offer some basic functionality. Both use fully analogue instrument clusters that don’t display much other than the speed, odometer and fuel gauge. While LED headlights are part of both scooters, it’s only available on the DLX variant of the Activa 6G. Another common feature is the external fuel filler cap. The Jupiter also has a slightly larger fuel tank at 6 litres.

The Activa, however, is the one with the stronger feature list as it also has the company’s silent start function and a kill-switch that doubles as a starter button.

As you can tell, it's the Honda Activa 6G that has the edge on paper. It has slightly better power and torque numbers, and a more impressive feature list. However, it is also slightly more expensive at Rs 63,912 (STD) and Rs 65,412 (DLX) compared to the BS6 Jupiter which starts at Rs 61,449. A more affordable price tag is not the only advantage the Jupiter has, as the longer wheelbase and 12-inch rear wheel will certainly give it better stability and dynamics.

In the past, the TVS Jupiter has been our segment favourite, and it will be very interesting to see if it can retain its supremacy. Stay tuned to Autocar India for a proper comparison review.