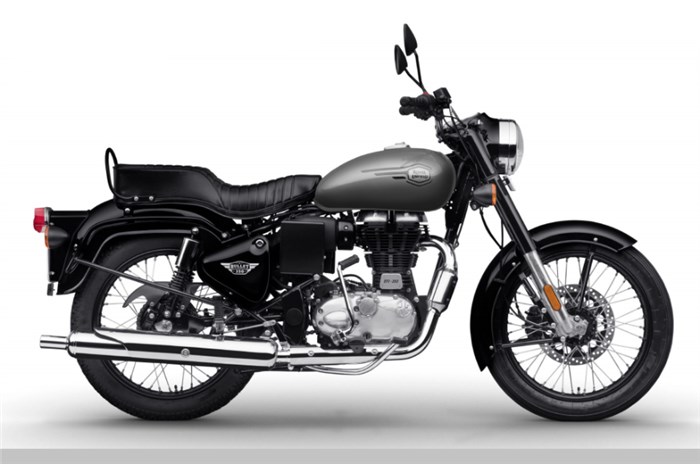 Royal Enfield has updated its website with prices and specifications of the BS6 Bullet 350 and Bullet X 350 ES (Electric Start). The Bullet X 350 is priced at Rs 1.21 lakh, the standard Bullet 350 at Rs 1.27 lakh and the Bullet X 350 ES at Rs 1.37 lakh (all prices, ex-showroom, Delhi). These new prices are about Rs 9,000 more than those of their corresponding BS4 models and that’s a substantial hike. We’d earlier reported that dealerships had begun accepting bookings for the bike and also revealed on-road prices. You can read about it here.

The main difference between the standard 350 and the X variants comes in the form of a blacked-out theme that replaces much of the chrome. On the X variants, the engine block and crank cases are finished in black. They also get a simpler, differently styled fuel-tank logo – a decal instead of the 3D emblem that the standard 350 gets.

We can now also confirm that the BS6 bikes use a fuel-injection system instead of a carburettor, and that the exhaust has an additional catalytic converter. Peak output figures from the 346cc, single-cylinder air-cooled engine are 19.1hp and 28Nm of torque. In comparison to the outgoing BS4 model, the torque figure remains the same, but power is down from 19.8hp. These are the same figures seen on the BS6 Classic 350 that was launched in January.

The Bullet 350 range is Royal Enfield's most affordable one, and while the Rs 9,000 price hike is steep, it is still over Rs 40,000 cheaper than the most affordable Classic 350 model. A couple of days ago, we also got news that the next-gen Royal Enfield Thunderbird line will now be called the Meteor. The wait for that bike shouldn't be too long now and you can head here to read all about it.