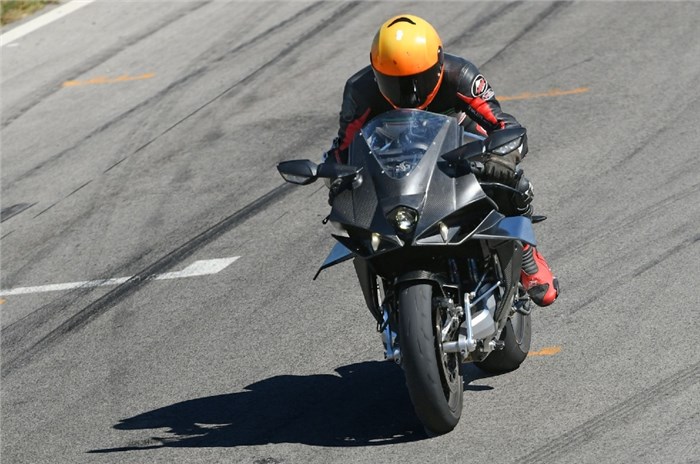 The exotic motorcycle was unveiled in November last year at the EICMA show in Milan.

Bimota has posted images and a video of its supercharged Tesi H2 being tested on a racetrack. The Tesi H2 was unveiled in November last year at the EICMA show in Milan, and the new images of it show that it’s inching closer to the production stage.

For the uninitiated, Kawasaki bought a 49.9 percent stake in Bimota last year, with an intention of reviving the Italian marque. Based on the 231hp supercharged Ninja H2, the Tesi ditches the conventional fork and brings in a double-swingarm chassis, a hub-centre steering setup and plenty of aluminium and carbon-fibre elements.

The bike seen on the track has its headlights, turn indicators and even mirrors in place, leading us to believe that the motorcycle is almost ready. According to the company, the Tesi H2 was being tested to ‘evaluate the latest technical improvements’.

Another bike Bimota has planned is the Kawasaki Z1000-powered Bimota KB4. The KB4's rendering suggests a modern take on a retro design. The bubble-shaped fairing, rounded headlight, creases on the tank and tail section are inspired by the Bimota KB series from the '70s and '80s. The company was supposed to reveal the KB4 towards the end of this year, but it is expected to be delayed due to the global pandemic.