We finally get the Duke 250, while the 390 gets major upgrades, and the 200 is now BS-IV ready and looks sportier. 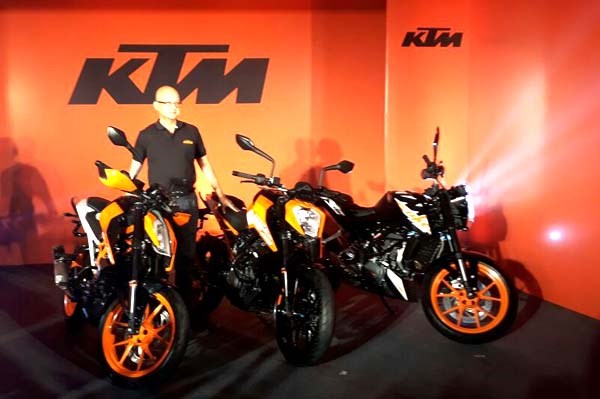 This was the model that made a lot of news at the 2016 EICMA show, and that’s because KTM has given the Duke 390 some substantial upgrades, both mechanical and aesthetic. The obvious bit here is the edgy, new 1200 Superduke-inspired styling, especially that sharp, all-LED headlamp unit which gets LED DRLs. Then, there's the bigger 13.5-litre steel fuel tank as against the older bike’s smaller 10.5-litre plastic unit, adjustable control levers, and the new TFT colour instrument display that can be hooked up to your smartphone via the KTM My Ride infotainment system for streaming phone calls and music.

The bike’s 373.2cc, 43.5hp, single-cylinder, fuel-injected, liquid-cooled engine looks unchanged, but like the 2017 RC390, it now gets a ride-by-wire throttle, which is sure to make power delivery smoother. Also, it’s BS-IV compliant and gets a side-slung exhaust, unlike the underbelly unit on the earlier bike.

The 2017 Duke 390 uses a new two-part trellis frame, as against the earlier bike’s single-piece unit. As a result of the new frame, the seat height has been bumped up by 20mm to 830mm, and at 1,357mm the wheelbase is down by 9mm compared to the older version. Its front suspension still comprises a 43mm upside-down fork, but it’s now a split-function unit – one side for rebound and the other for compression. Stopping power should be better too as there's a bigger 320mm brake disc up front, against the older bike's 300mm rotor.

So yes, the Duke 390 is a bit costlier than before, but you also get a lot more kit for the asking price.

For 2017, there haven’t been major revisions to the 200. Yes, it’s now BS-IV compliant, and comes with new graphics and orange wheels (à la Duke 390) which make it look sportier. However, the bike remains mechanically unchanged. It uses the old bike’s single-piece frame and doesn’t get the styling updates like the 390. Despite the BS-IV compliance, however, you get 25hp and 19Nm from the bike’s 199.5cc single-cylinder, liquid-cooled, fuel-injected engine, which notably, is still quite a bit more than what the competition has to offer.

You might mistake the Duke 250 for the bigger 390, for both feature the same frame and the new, edgier design. However, the 250 doesn’t get the all-LED headlamp setup and it also gives the TFT colour display a miss. Instead, it makes do with a simpler unit similar to the one on the 200. Another differentiator is the black alloy wheels, whereas the 390 and 200 come with bright orange ones. Keener eyes will even spot the different colour schemes on the two bikes.

It also misses out on the ride-by-wire tech and stickier Metzelers from the 390 (it's shod with MRF Revz C1 rubber), all in the interest of keeping the prices low. Stopping power comes from a 300mm disc/four-piston caliper up front and a 230mm disc/single-piston at the rear, which is the same setup as in the Duke 200. However, there's no ABS even as an option.

About the quarter-litre Duke, it uses a 250cc single-cylinder, liquid-cooled and fuel-injected motor which produces 30hp and 24Nm and comes mated to a slipper-clutch-equipped six-speed gearbox.

Bookings for the 2017 KTM Dukes commence today, and deliveries will start in a week.