Interested in a fuel-injected motorcycle? Here are the most affordable options available. 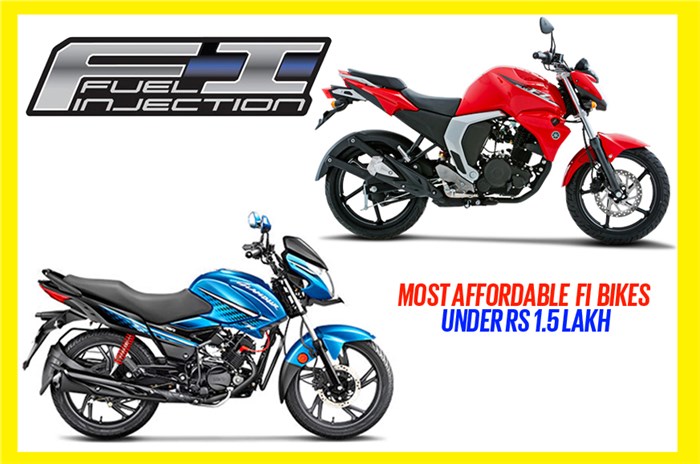 As the implementation of a new technology increases, its manufacturing costs decrease. There was a time when fuel-injection was limited to very few vehicles aside from the very top tier of motorcycles and cars. But today, almost every single car you buy is fuel-injected and a lot of more affordable motorcycles are receiving the technology, too. With the advent of stricter emissions norms, almost all bikes are likely to have this feature within a couple of years.

At the moment though, fuel-injection certainly isn’t a must-have and a carburettor gets the job done, almost just as well. That being said, a fuel-injected motorcycle does offer some advantages. For starters (pun unintended), cold starts are a breeze; just thumb the starter and hear the engine come to life – no choke required. Leaving your motorcycle unused for long periods of time? No worries. Just reconnect the battery and your bike should start right up. There’s also no need to worry about icing (in extreme cold), jetting (for different altitudes), remembering to switch the petcock to ‘reserve’ or any of the other charms that come with carburettors. In other words, fuel-injected bikes are far more straightforward from a day-to-day standpoint.

Fuel-injection also tends to bring the advantage of a smoother-feeling engine, and that’s something most people will appreciate.

Of course, the downside comes in the form of more complexity and ergo, a higher cost. For those of you willing to play by those rules, here’s a list of the most affordable fuel-injected motorcycles you can buy in India today under Rs 1.5 lakh.

Price - Rs 1,48,043 (non-ABS)
The Bajaj Dominar uses a triple-spark engine based on the KTM 390 motor. However, the Bajaj uses a different cylinder head and is tuned very differently from the KTM. While not as powerful as the KTM, it still puts out a respectable 35hp at 8,000rpm and 35Nm of torque at 6,500rpm, making it the most powerful motorcycle on this list. It is also one of the best-equipped motorcycles here, coming with dual-channel ABS, a powerful LED headlight and a digital LCD instrument console.

Price - Rs 1,29,335
The Fazer 25 shares its engine with the FZ25 (also on this list). The air and oil cooled 249cc motor produces 20.9hp at 8,000rpm and 20Nm of torque at 6,000rpm. This bike's main advantage over the FZ comes in the form of added wind protection – something that you will appreciate if you’re riding at highway speeds for prolonged periods of time. This protection, along with its 14-litre fuel tank, makes the Fazer 25 a good long-distance motorcycle. Like the Dominar 400, this bike also gets an LED headlight but we have found it to be disappointingly weak. Unfortunately, ABS is not an option either.

Price - Rs 1,26,483 (non-ABS)
The Pulsar RS 200 uses a fuel-injected version of the 199.5cc engine seen on the NS 200. In this guise, the liquid-cooled motor churns out 24.5hp at 9,750rpm and 18.6Nm of torque at 8,000rpm. The RS also gets ABS, though it is only a single-channel system. A digital-analogue instrument cluster and twin projector headlamps mean that this bike features decent levels of equipment; although the bike's loud and angular design may not be to everyone’s taste.

Price - Rs 1,27,000
The latest iteration of Yamaha’s sharp and focused track tool, the R15 ver 3.0, uses a 155cc liquid-cooled engine putting out 19.3hp at 10,000rpm and 15Nm of torque at 8,500rpm. The engine features Variable Valve Actuation (VVA), a technology usually seen in much more expensive motorcycles. This allows the motor to have a strong top-end without sacrificing low and mid-range power. While the R15 misses out on ABS, it does get a slipper clutch, allowing you to downshift aggressively without locking up the rear wheel. LED headlights and an LED tail lamp are also standard on the R15.

Price Rs 1,19,335
For those of you who aren’t riding on the highway and don’t need the extra wind-protection offered by the Fazer 25, the FZ makes for a good city commuter. The engine on the FZ is identical to that of the Fazer, and puts out the same power and torque figures, as well. The FZ also gets an LED headlight and tail-lamp. Unfortunately, it is the same headlight as on the Fazer 25 which (as we have already mentioned) is disappointingly dim.

Price - Rs 1,15,746
If the R15 ver 3.0 is too committed and too sharp for your liking, but you still want a sweet handling motorcycle with a sporty faired design, then the R15S is the bike to have. The S is based on the previous R15 ver 2.0 but features a more comfortable single-unit seat and more relaxed ergonomics. The 149cc engine produces 16.6hp at 8,500rpm and 15Nm at 7,500rpm, sent to the rear wheel via a six-speed gearbox.

Price - Rs 1,09,430
The Apache RTR 200 4V is available with either a carburettor or a fuel-injection system, the latter is supplied by Bosch. The FI variant commands a hefty premium of Rs 12,700 over its carburetted alternative. The fuel-injected version produces 21hp at 8,500rpm (0.5hp more than the carb), and 18.1Nm of torque at 7,000rpm from its 197.75cc air- and oil-cooled engine. The updated RTR 200 4V features a slipper clutch as standard. However, dual-channel ABS is only offered on the carburettor variant in order to keep pricing competitive.

Price - Rs 1,06,896
The recently launched Suzuki Intruder is the only motorcycle on this list styled to look like a cruiser, mimicking the design language of the larger Intruder motorcycles. It is a long and low motorcycle with relaxed and comfortable ergonomics. Its 155cc engine is available with either a carburettor or a fuel-injection system. The motor churns out 14.8hp at 8,000rpm and 14Nm of torque at 6,000rpm, and is coupled to a five-speed gearbox. The Intruder comes with single-channel ABS, digital instrumentation and an LED tail-lamp as standard. The FI variant comes at a premium of Rs 6,901 over the carburetted version.

Price - Rs 93,032
The first motorcycle on this list to dip under the 1 lakh-rupee-mark is the Suzuki Gixxer SF FI. Like the Intruder, the Gixxer can also be had with a carburettor, with an accompanying price drop of Rs 2,995. This is quite a small price gap, and it seems to indicate that Suzuki is encouraging its buyers to opt for the fuel-injected variants of their motorcycles. For a premium of Rs 7,184, the SF can also be had with single-channel ABS. The Gixxer's engine output is identical to that seen on the Intruder.

Price - Rs 91,535
Like the RTR 200 4V, the new TVS Apache RTR 160 4V is also available with two engine options. The fuel-injected variant produces 16.8hp at 8,000rpm, while the carburettor variant churns out 16.5hp at 8,000rpm. TVS charges a premium of Rs 6,000 for the fuel-injection version, which is quite significant when one compares it to the Suzuki Gixxer SF. Given its sharp styling, brisk performance and comfortable ride quality, the RTR 160 4V is our pick as the best premium 150-160cc bike in its segment.

Price - Rs 88,143
The smaller version of the Fazer features an air-cooled 149cc engine making 13.2hp at 8,000rpm and 13Nm of torque at 6,000rpm. Like its larger sibling, it features good wind protection and comfortable ergonomics. One of the Fazer’s strongest points is its refinement – something that is partly achieved with the implementation of fuel-injection.

Price - Rs 81,040
The FZ FI uses the same engine as the Fazer FI; and once again, its trump card is its excellent refinement. The FZ also features a comfortable riding position, making it a good city commuter. It gets a disc brake at the front and a drum brake at the rear, but no ABS.

Price - Rs 66,700
Finally, we come to what is the cheapest fuel-injected bike in the country, by far – the Hero Glamour Programmed FI. The 124.7cc motor in the Glamour puts out 11.7hp at 7,500rpm and 11Nm of torque at 6,500rpm. The bike also gets a 240mm front disc brake, and an LED tail-lamp. By virtue of its fuel-injection system, it offers a level of convenience that no other 125cc commuter bike in its segment can match. If you want a fuel-injected commuter, this is your only choice at the moment. The Glamour FI commands a premium of Rs 7,800 over its equally-specced carburetted namesake.