The Dominar 250 and Gixxer 250 cost nearly the same. Which of these quarter-litre motorcycles should you buy? Vishal Venugopal helps you decide. 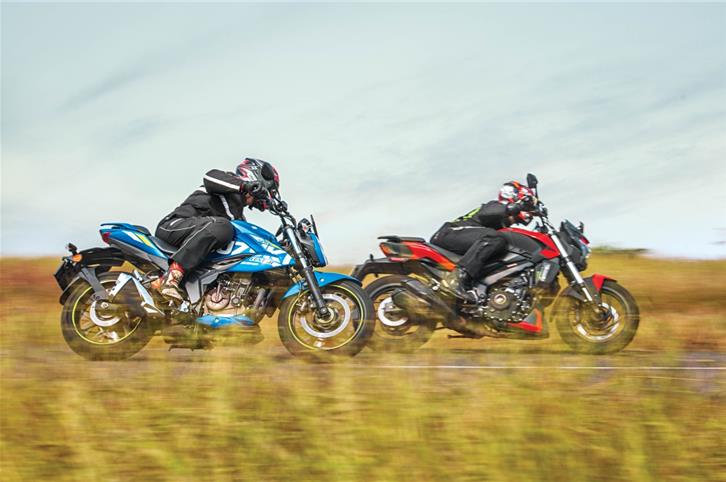 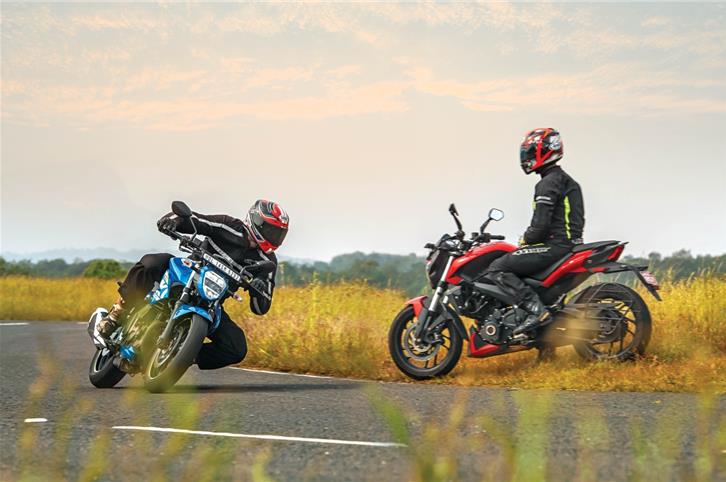 Monday mornings are a drag. You have to force yourself to get out of the comfortable space you’ve probably spent the last 15 hours in and throw yourself into a work routine. But you know what I despise about them the most? The commute. Sometimes, though, the way you commute to work can make all the difference. Today, we’re comparing two quarter-litre motorcycles that fit that bill and you could even deem them glorified commuters. Yamaha’s FZ 25 falls into this category, as well, but the manufacturer didn’t have a media test bike that we could feature.

Neither of these bikes is particularly new, in terms of design. The Gixxer 250 was launched only last year, but since it shares most of its design with the smaller 150cc model, it does seem like it’s been around for a lot longer. The Dominar came out even more recently, but it’s essentially a Dominar 400 with a smaller USD fork, narrower tyres and a box section swingarm, so, again, it doesn’t exactly look fresh.

Nevertheless, both bikes follow vastly different design languages. The Gixxer’s is more conventional but this Suzuki Ecstar MotoGP-inspired livery we have here is gorgeous. The base blue colour is bright and finished really well, and detailing like the diamond-cut wheels and fluro-green rim stripes make it stand out in a crowd. 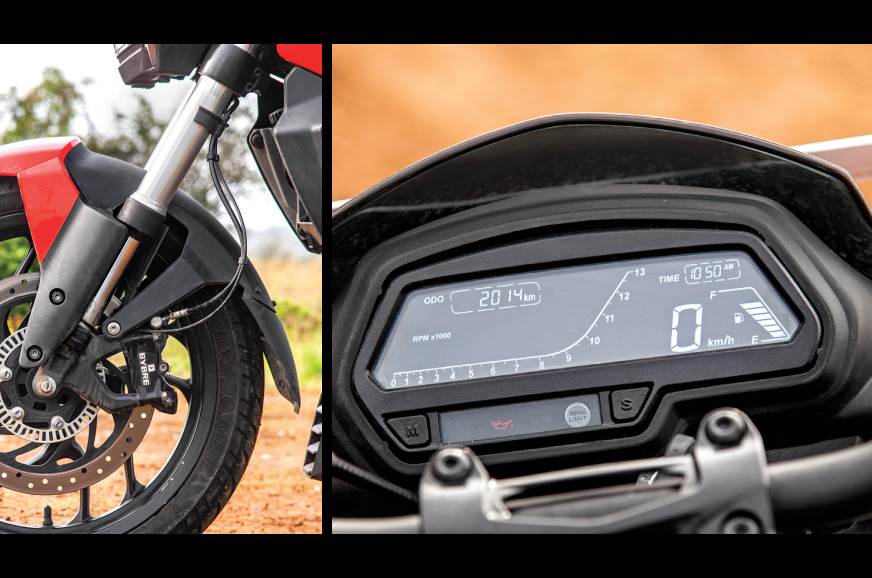 The Dominar gets a narrower but upside-down fork; primary display is hard to read.

The Dominar 250 will stand out in a crowd, too, with its bright red colourway and long, low-slung stance. It is, after all, inspired by a certain power cruiser from Italy. It has the same body panels, chunky 13-litre fuel tank and rear cowl as the Dominar 400. Unsurprisingly, it is, and also feels like, the bigger motorcycle. We’ll get into this in more detail, further on.

The Dominar, undoubtedly, commands a greater presence on road, but there is one let-down in its design – the choice of tyres. The rear is a narrow 130-section unit that ruins pits sense of proportion.

Overall, the Suzuki is a more nicely put together motorcycle and its finish levels are noticeably better than that on the Dominar.

Considering these aren’t motorcycles that have been developed to excel in a particular niche, the list of features they offer is pretty standard. However, they both outdo each other in certain areas. The Dominar misses out on radial tyres, while the Gixxer doesn’t get a side-stand engine cut off, and more importantly, a USD fork. That said, there are some similarities – they both get dual-channel ABS and  feature a simple reverse LCD digital display. The Dominar 250 uses an instrument cluster that is based on the bigger, pre-2019 Dominar 400. It features a primary handlebar-mounted digital display and a secondary unit on the fuel tank with tell-tale lights that are out of the line of sight, and we found that we almost never looked at this one. Despite its positioning as a sport-tourer, the Dominar’s cluster lacks a gear position indicator. It’s also not very vivid, and isn’t as easy to read as the Gixxer’s. 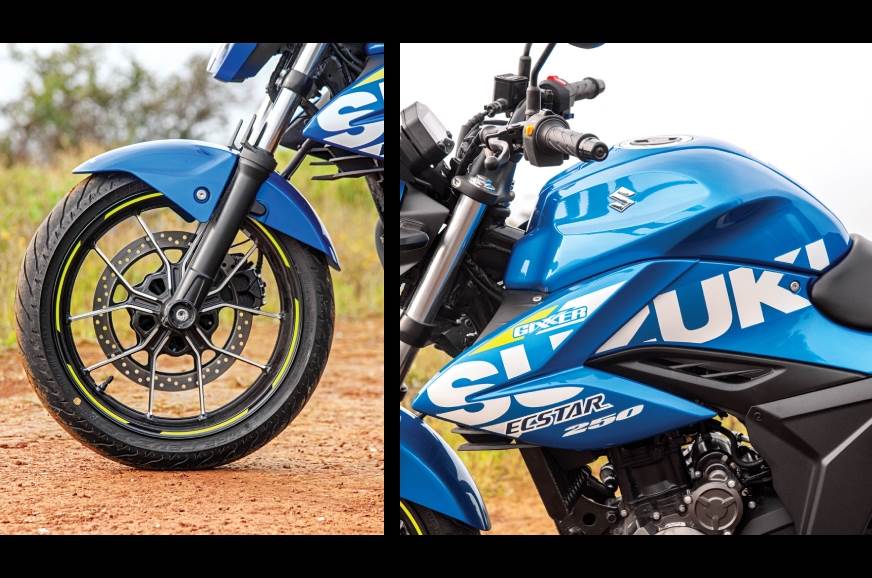 There was this one particular shot that I had in mind for these two bikes and it required us to ride to Aamby Valley. We’re based in Mumbai, and it’s hard to describe how chaotic the traffic can be.

But, break free of the confines of maximum city, in any direction, and you’ll be met with some stunning views, and more importantly, some spectacular roads that lead there. Aamby Valley is one of them. To get there, you first ride through the city and eventually onto the old highway that leads to the winding roads taking you to Lonavala. This mix of conditions also makes it one of the most efficient, and quickest, ways to put a motorcycle through its paces.

While both the engines powering these motorcycles displace just under 250cc, the Dominar uses a more modern DOHC architecture and liquid-cooling. In application, this quarter-litre mill is slightly more refined than its rival’s. On the other hand, it’s also a lot calmer and prefers staying in the lower to mid-range of the rev band.

As a result, you’ll find that the Gixxer is the motorcycle that you want to ride quicker. It’s also more engaging because a quicker revving engine also means more frequent gear shifts. We were out on the old highway, just after the break of dawn, and moving at a cracking pace. They both have similar peak output figures and while the Dominar manages to keep pace with the Gixxer, it does so with a lot more ease. For example, a 120kph cruise on the Suzuki puts the engine at a stressed-sounding 8,500rpm, while the Bajaj does it at 1,500 revs lower. The Dominar’s more spacious and relaxed ergonomics, along with its plusher ride, also mean that you can spend longer periods out on the highway.

Where the Suzuki does edge ahead, quite literally, is every time you accelerate away from a speedbreaker or towards the very upper end of the performance band. It’s quicker off the line and the performance table will show that it’s also quicker to 100kph.

The reason for this is one of the chinks in the Dominar’s otherwise formidable armour – its weight. With 24kg over the Suzuki, the Dominar feels like the heavier motorcycle the moment you take it off the side stand.

The longer wheelbase and steering geometry also have some effect on the dynamics of the bike. At slow speeds, the Dominar folds into turns and at pace, you have to pick the bike up and then urge it down into the next one. The Gixxer, meanwhile, is at the other end of this agility spectrum. It feels effortless to tip into a corner and also inspires a lot more confidence than the Dominar.

As we crept back into the city, I realised that the Dominar is not a bike that actively wants to go fast. Sure, it can, but its sweet spot is while carrying a brisk pace rather than going flat out. It’s also got the more forgiving suspension setup and comfier seat, so it’s also the motorcycle you’d rather be stuck in traffic on. 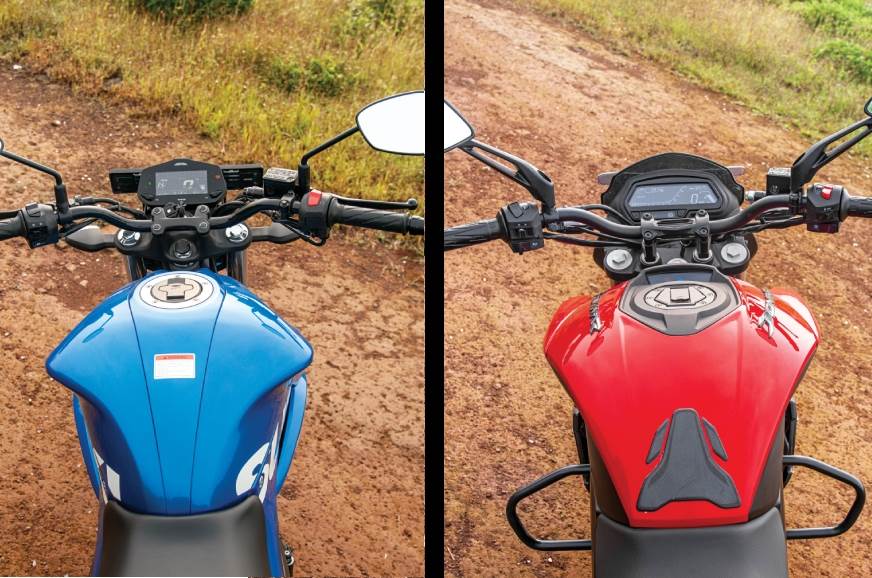 The Gixxer feels slimmer, with the handlebar close to you; Dominar is more relaxed.

I can’t say the same about the Gixxer. One, because of the way the bike is set-up, it urges you into little gaps in traffic and makes you want to blip the throttle every time you downshift. Its curved seat is not as comfortable and while short riders won’t mind, taller riders will constantly find themselves uncomfortably positioned where the seat curves upwards. Unsurprisingly, at the end of a long day, I found my bottom was yearning to be back on the Dominar. Same goes for the ride quality. It’s great for going fast, but a rather stiff suspension, especially at the rear, makes it quite uncomfortable over severely broken patches.

At the beginning of this story, I told you these bikes fell into the same category. But, they’re vastly different in terms of the experience they deliver. The Gixxer is the motorcycle I wanted to ride more because its energetic and sporty nature matches the way I like to ride bikes. Then again, the Dominar delivers a more mature experience, and while its isn’t as quick, sporty and exciting, its calm, comfortable and capable nature will certainly appeal to a different sort of rider. The Gixxer wins here by a tiny margin because it’s the faster bike, feels better built and is more involving to ride – all important factors for someone looking to step up to a higher capacity. But the Dominar cuts it very close with its own, very different set of advantages. Ultimately, the choice is yours. You pick the blue pill, you wake up in your bed, on a Monday morning, envisioning yourself carving through traffic at a pulse-raising pace and hitting the twisties on the weekend. You pick the red pill and you won’t be as inclined to dive bomb every gaping traffic, but you will be more at peace on your bike and already dreaming up the next long ride into the distance. 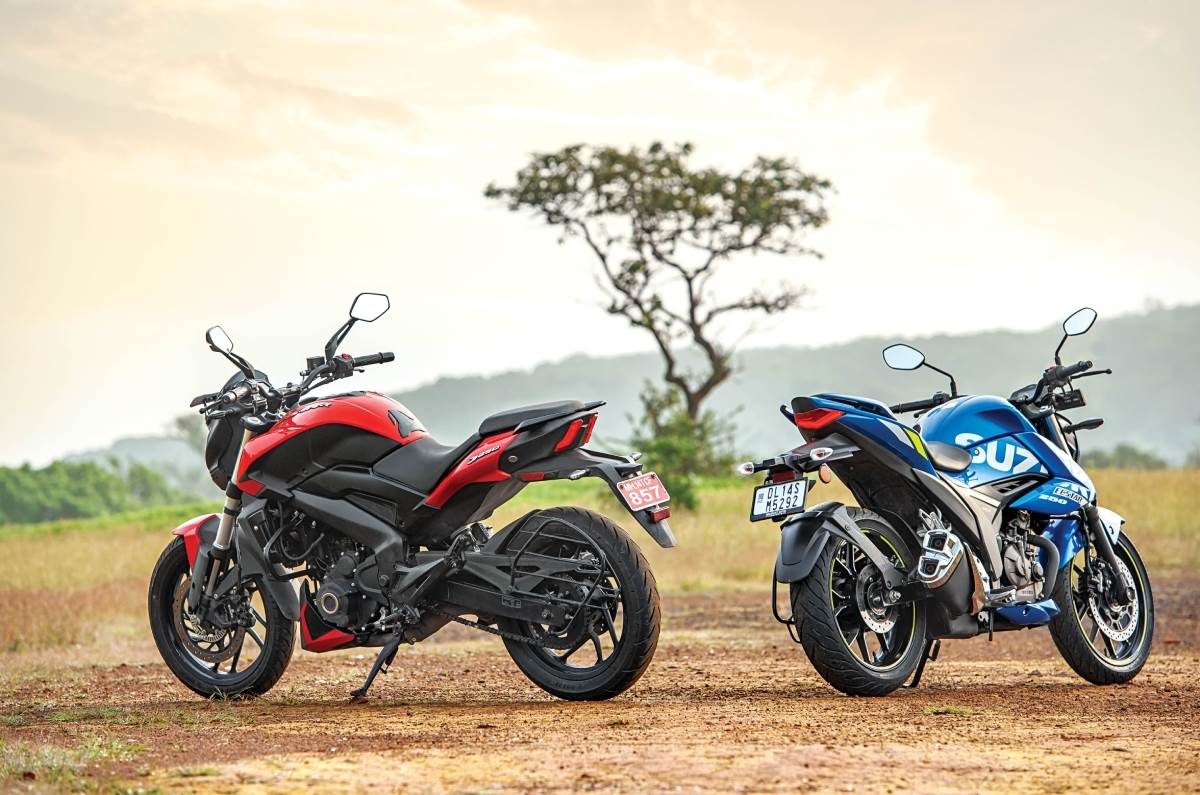