These 125cc maxi-style scooters present a blend of performance, practicality and attention-grabbing looks. We tell you which is the one to go for.

Make : Aprilia
Model : SXR 125
The gearless scooter revolution in India started with the two-stroke Kinetic Honda models in the mid-1980s, before gaining momentum with the four-stroke 102cc Honda Activa in 2001. By the end of that decade, the 110s had taken over, and by the end of the next one, 125s were on the rise. While India is still way off in getting genuine maxi-scooters, the likes of which you see in Europe, we have recently begun receiving ones that aim to recreate that form factor but with more basic underpinnings and smaller engines. The Aprilia SXR 125 and the Suzuki Burgman Street are two such offerings in the 125cc maxi-style scooter segment, and here’s how they stack up. 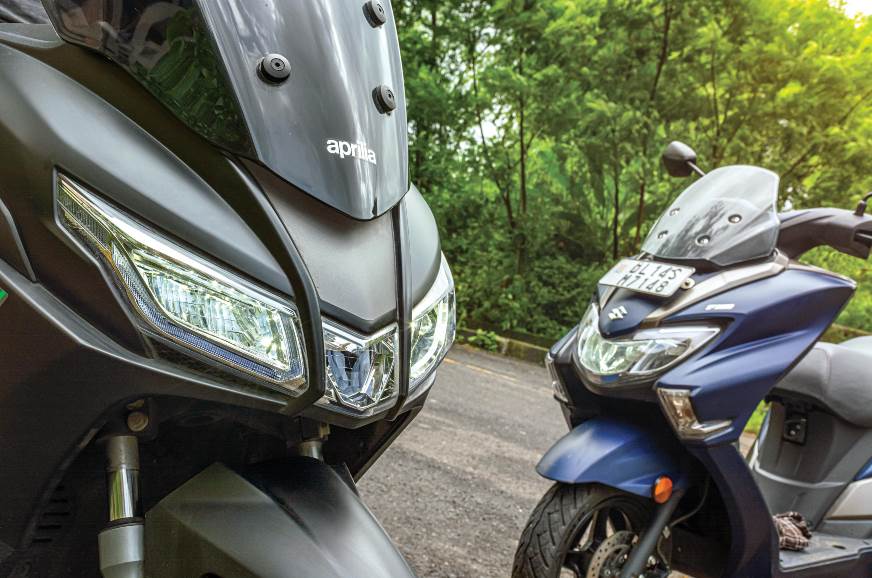 Both these scooters sport the aforementioned ‘maxi’ form factor, with apron-mounted headlights, large windscreens, standalone handlebar shrouds and floorboard extensions that act as footrests. But it’s the Aprilia that manages to pull off this look better, coming across as a far more proportionate and striking vehicle. Bits like the flashy RS 660-inspired LED headlights and smart-looking alloy wheels ensure that it has all the flair you’d associate with an Italian product. Thanks to a large, well laid-out digital instrument cluster and neat seat stitching, the Aprilia has a greater sense of occasion too. 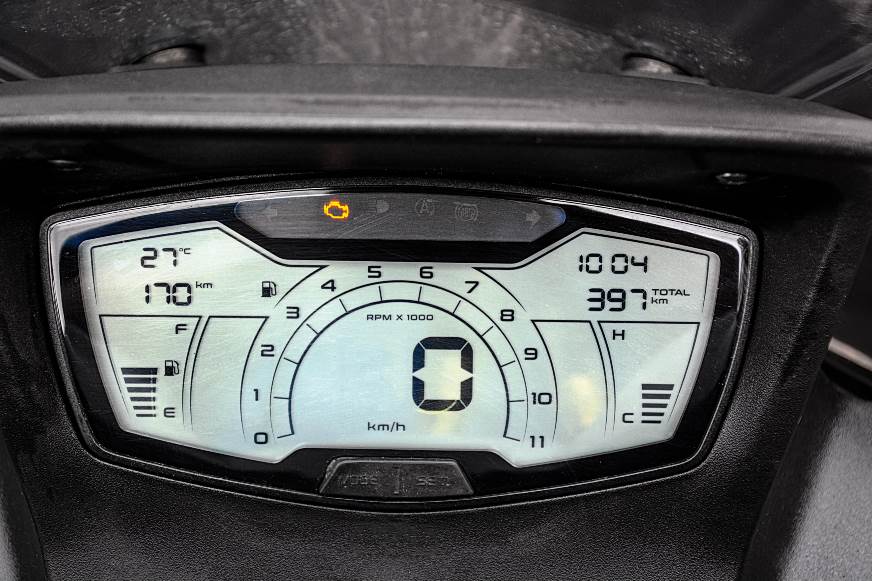 The Burgman’s design isn’t as cohesive, and can come across as rather disproportionate from some angles. Where the SXR’s skin feels wrapped taut around the scooter, the Burgman’s bulbous bodywork fails to gel with the more puny underpinnings, making it look like it could use a leg day at the gym. Nevertheless, it does have presence going for it, and the handsome LED headlight offers some redemption.
While the Aprilia’s non-connected display does look more impressive, it can’t quite match the Bluetooth-enabled Burgman unit on the functionality front. In most other areas, these two are quite evenly matched on features, with both getting boot lights, USB charging sockets, and storage compartments on the back of the apron. The Suzuki has a slight upper hand with more underseat storage space and a combination keyslot that the Aprilia misses out on. However, the SXR fights back with nicer feeling switchgear and better build quality – for the most part, because there are a few panel gaps in the black plastics that could be tightened up.
One area where the Aprilia has no answer, though, is floorboard extensions. Because while the Suzuki’s are quite large, well placed and comfortable, the SXR’s extensions are oddly-shaped and poorly-placed, rendering them nearly unusable. Extensions aside, the Suzuki’s floorboard is also the larger one here by some margin, though it is quite high up and places you in a slightly knees-up position, which can become uncomfortable after a while. The Aprilia’s lack of space extends from the floorboard and boot to the seat contouring as well, though its cushioning did feel better than the Burgman’s.

The SXR does have the more powerful engine on paper, but that power is produced higher up in the rev range, and it also has to pull around an extra 18kg. So it’s the lighter Burgman with its higher torque output that feels significantly quicker. Right off the mark, the Suzuki feels more eager and accelerates faster, and some of this is also down to CVT tuning; the Burgman accelerates hard but seems to max-out at 99kph, while the Aprilia builds speed more slowly but goes all the way to a speedo-indicated 109kph. But these are city-oriented vehicles, and at the speeds that you’re most likely to encounter in this environment, the Burgman is distinctly the zippier of the two. 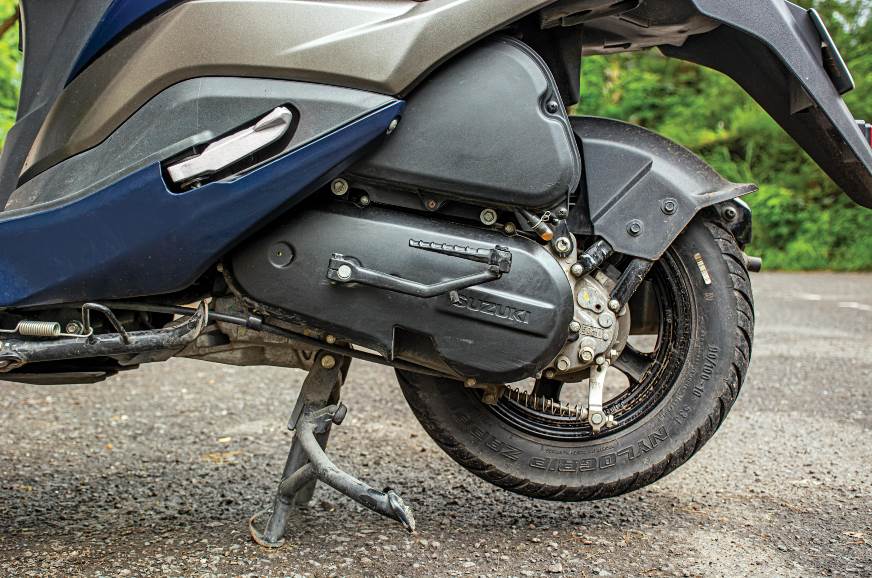 The fact that it also serves up significantly better fuel efficiency in the city and on the highway is just a double whammy in the Suzuki’s favour. It’s a close-fought battle on the highway, where the Burgman’s 55.5kpl slightly edges out the SXR’s 51.9kpl. But there’s absolutely no contest in the city, with the Aprilia’s 46.5kpl completely paling in comparison to the Suzuki’s astonishing 63.7kpl. A small saving grace is the SXR’s sizeable 7-litre fuel tank, which helps it manage similar distances to the Burgman between fuel stops.
So the Aprilia is down on fuel efficiency, and its performance isn’t just slower than the Burgman’s, it’s downright disappointing for a 125cc scooter. But where it redeems itself is refinement. If you’re not irritated by its sluggishness, the SXR’s engine can be a smooth and soothing companion as you potter along lackadaisically. Whatever speed or RPM you’re at, there are barely any vibrations to be felt anywhere on the scooter, and you’re also accompanied by a rather pleasant exhaust note. The Burgman is a rather refined scooter in isolation, but the SXR just makes it feel and sound that little bit more gruff.

The contrast between these two scooters continues in the ride and handling department. The SXR’s suspension setup has an underlying firmness to it, but it certainly isn’t outright uncomfortable. Yes, it is a little unforgiving at slow city speeds, but the trade-off is that once the pace goes up, it feels utterly stable and composed. Some of that can also be attributed to the rather long (by scooter standards) 1,325mm wheelbase and 12-inch wheels at both ends. Another upside to the stiffer setup is that you have some suspension travel left when you encounter larger bumps and potholes, which the SXR deals with rather well. 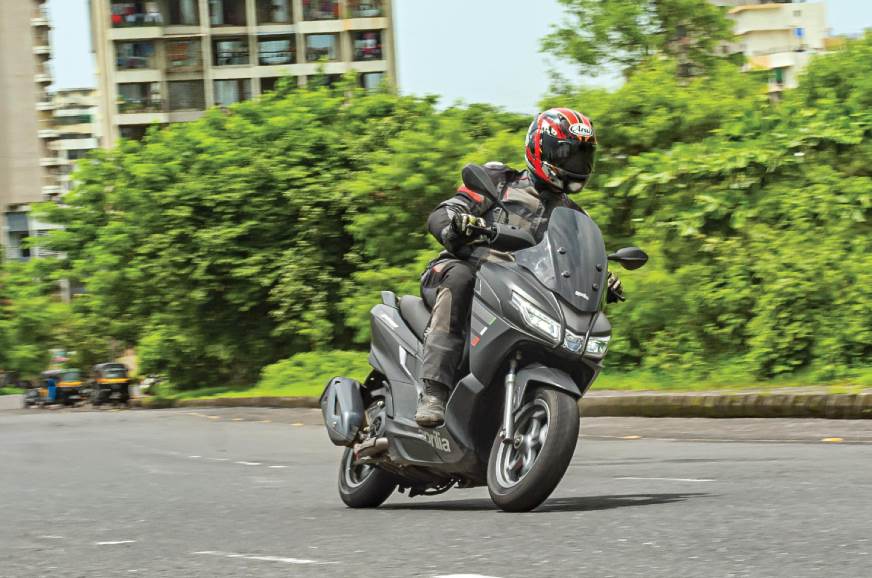 You get a much softer front fork on the Suzuki, which makes it quite comfortable in the city. Low-speed bumps are swallowed up very well, but when you decide to get a move on, the Burgman isn’t quite as unflappable. It begins to feel like it’s overreacting to the road surface and can come across as rather fidgety, especially over uneven concrete roads. 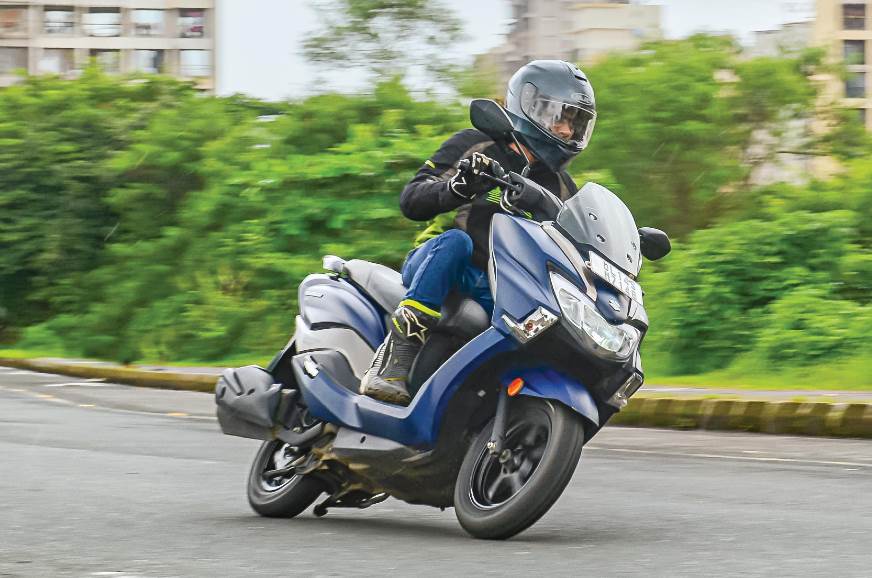 The softer setup doesn’t help in the handling department either, where the Burgman can feel a little vague through corners. It also makes the scooter feel a bit wallowy when encountered with a mid-corner bump. But handling is one area where the SXR excels. The poise and composure that you get in a straight line is equally applicable when the scooter is leaned over, and this sure-footed nature inspires confidence. That confidence won’t be shaken even when you encounter something unexpected, because its front disc brake is sharp and powerful, with decent feel at the lever. The Burgman, on the other hand, has a rather squishy-feeling front disc brake, resulting in longer stopping distances.

As scooters, these two are quite evenly matched. Each has a distinct flavour and offers a very different riding experience. But when you weigh up the pros and cons, things stack up rather closely, with each scooter losing out in certain areas and clawing back ground in others.
As maxi-style scooters, though, the Burgman has a bit of an upper hand. With more performance, more features, more space for you and your luggage, and a cushier suspension setup, it ticks more ‘maxi’ boxes than the SXR does. And once you factor in the price, the Suzuki has a very distinct upper hand. Because at Rs 88,600 (ex-showroom, Delhi) for this Bluetooth-equipped version, it’s nearly Rs 30,000 more affordable than the Aprilia (Rs 1.16 lakh, ex-showroom Delhi), and that is a massive difference. Massive enough to make the Burgman Street the winner of this comparison. Yes, the SXR has thoughtful touches and neat tidbits that make it feel special, and make you feel special when you’re on it, but it’s just not enough to justify that price gap.
But if you do like the idea of the SXR’s specialness, then perhaps you need to think a little bigger. An extra Rs 12,000 will get you the SXR 160, which not only plugs the 125’s performance chink, but also gives you the safety net of ABS.
ZARAN MODY 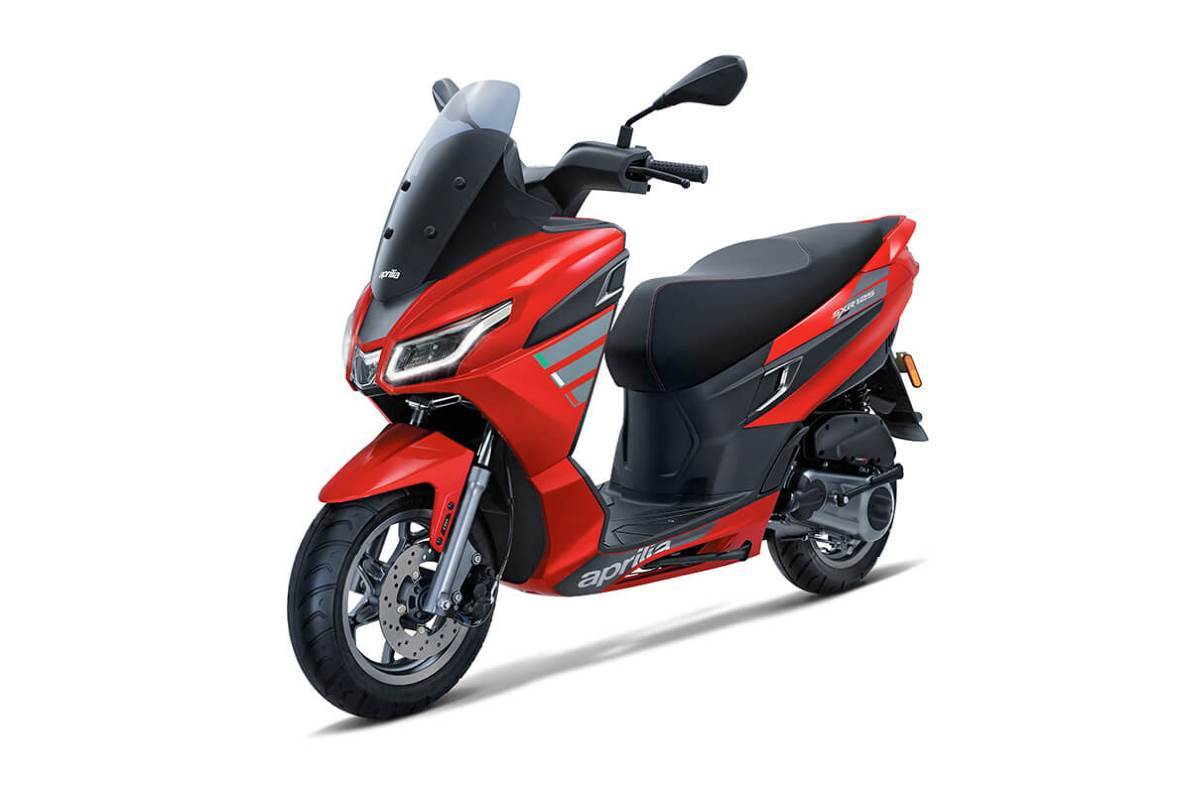