Swift vs Dzire: The long and short of it 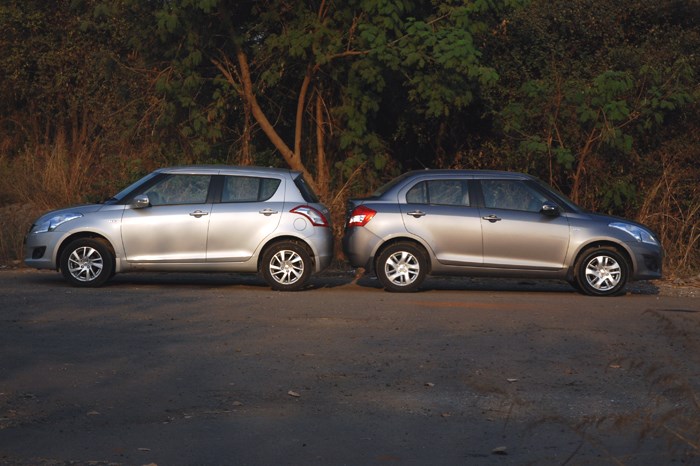 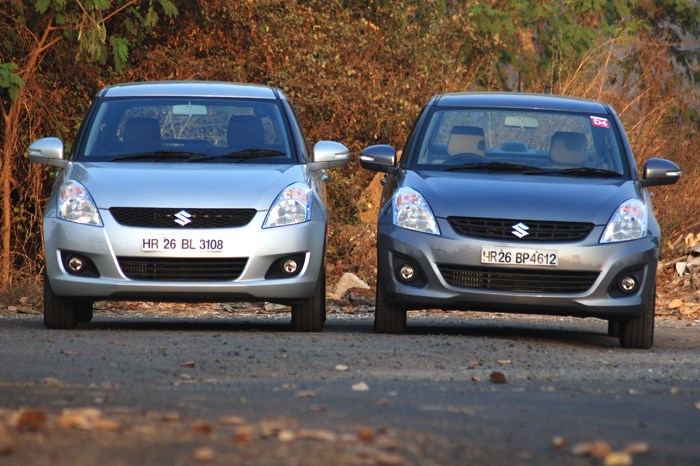 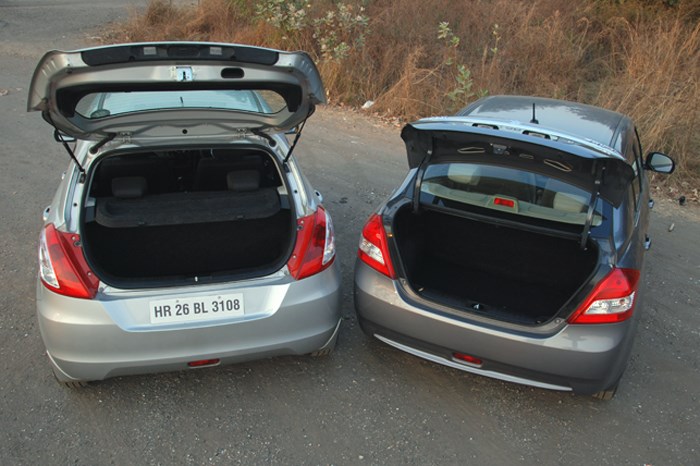 The new Dzire is more affordable than ever. In fact it's now in hatchback territory - Swift territory.

We love a bargain in this country. We also love a good saloon, what with all the prestige that seemingly innocuous third box brings. So when the government announced that ‘small cars’ – which is what most Indians equate ‘hatchbacks’ with – would be defined by a four-metre length cutoff, it only served to further widen the chasm between saloons and their bootless counterparts. The excise benefits meant that soon hatchback makers everywhere got their measuring tapes out and began filing down bumpers to make the cut. Meanwhile, the saloons basked in the warm glow of premium adulation, with their Rs 10-lakh price tags and optional leather seats. But remember, we love a bargain in this country, so it wasn’t long before the regulations were exploited.

Enter the compact saloon – a concept that seems illogical and aesthetically compromised, but actually makes tremendous economic sense. Tata was the first to nip the idea in the bud with the Indigo CS, which has been a huge success. Maruti followed suit with its new Swift Dzire which, unusually, is actually shorter than the car it replaces. A length of just 3995mm means it is officially a small car, and as a result Maruti’s been able to price it cheaper than the old car too! So what’s the catch?

While it’s better resolved than the old car, tacking a boot onto a car with as prominent a bonnet as the Swift is bound to look awkward. It doesn’t look like a conventional three-box saloon, and we wonder how this will go down with the Indian buyer looking for that ‘big car’ feel. You also kiss 124 litres of boot space goodbye compared to the old car and the 316-litre capacity is abysmal by modern standards, which really begs the question – is the Dzire really any better than the hatchback that spawned it?

We love the new Swift – in fact we crowned it our 2012 Car of the Year. It has two fantastic engines, is fun to drive, very refined, handsome to look at and has a modern cabin. So it’s good to see that most of its good bits have been adapted to the Dzire in the saloonification process. But, acknowledging the premium expectations of the discerning Indian saloon buyer, Maruti has taken some very welcome steps to make the Dzire plusher.

The interior is now a two-tone black-and-beige affair, the faux metal ditched for faux wood. The bigger rear doors open to a more reclined seatback, softer seats and beige upholstery. They’ve even recalibrated the rear suspension so the chauffeur-driven are little less rattled.

So it’s clear that the saloon – or notchback, to be precise – has a few tricks up its sleeve, so surely it must cost a fair bit more, right? Not quite. With the Dzire’s special introductory pricing, there’s only a difference of Rs 53,000-66,000, variant for variant, between it and the hatch. If that sounds like a lot, remember the old cars were closer to Rs 1 lakh apart.

And what about India’s favourite car-buying question? Since the engine mapping and gearing are unchanged and Maruti has kept the kerb weights of the two body styles identical – the economy (at least on the diesels) is near-identical too.

On paper, there isn’t much between the Swift and the Dzire – it’s more about what you want from your car. Yes, the saloon offers a little more comfort, a more pleasant cabin and a bit more boot, but the hatch isn’t exactly terrible on these fronts either. As with the previous generation, Maruti is marketing the two cars very differently. It says if you drive yourself and don’t travel with passengers or luggage often, get the hatch, no question.

There’s also no question about the Dzire’s incredible appeal. Dealers tell us that customers who were waiting for delivery of their last-gen models were more than happy to upgrade to the new car, despite the reduced boot space. They also said most buyers had their heart set on the Dzire before they even stepped into the showroom and that some who came for the hatchback were even swayed into upgrading to the saloon. So, with the two priced so closely, will the new booted car cannibalise sales of its little sibling? It remains to be seen. Maruti maintains the current Dzire prices are only introductory and will go up over the next few months and, for many buyers, a tight budget governs the purchase. Still, with such a competent saloon at such an attractive price in a market like ours, we wouldn’t be surprised. We love a bargain, after all.