Mini: Then and now 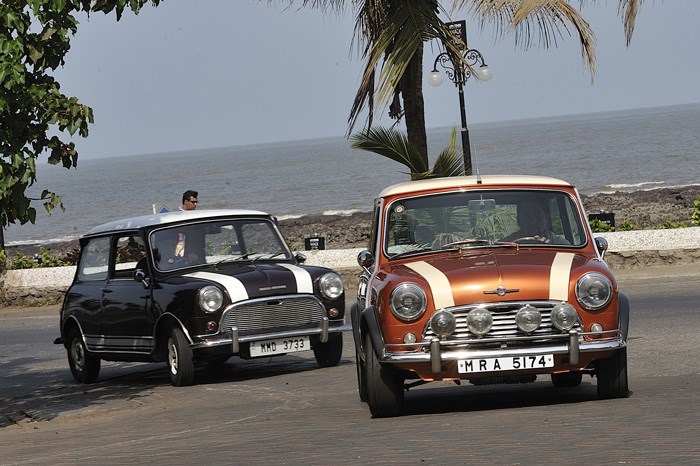 They’re all Minis and that’s pretty apparent. We take a close look at Mini’s long journey from BMC to BMW.

You know the history. Nasser of Egypt blockades the Suez Canal in 1956, the price of petrol shoots up and the BMC (British Motor Corporation, not Brihanmumbai Municipal Corporation) sets out to produce a small, comfortable and fuel-efficient car. The man selected for the task, engineer Issigonis, is given a size template of three metres by 1.2 metres, and with it a massive engineering headache. Then, to make matters worse, he’s told to use existing engine bits. What he and his small team come up with eventually, however, is a work of pure genius. Compact in the extreme, fuel efficient, of course, and revolutionary in almost every area – this is a landmark car. Project ADO 15 in fact works so well that more than five million cars are eventually produced.

Today Mini belongs to German carmaker BMW which, after acquiring the brand in 1994, along with the Rover Group, now makes a modern version of the car. What we have here today are the Mini Convertible, representing the modern car, and a pair of original ’64 and ’66 Minis, representing good old BMC. This is going to be just fun.

We know the old Minis are going to be much smaller than the modern one, but we’re still shell-shocked when the cars finally arrive – they look like half-size scale models. They’re tiny! And then we see the 10-inch wheels and fall over laughing; they look like they’ve been stolen from a scooter. BMW’s Mini Cooper convertible, in contrast, looks as big as an SUV. And the 17-inch wheels look almost twice the size. Then there are other delights. We pop open the bonnets to take a look at the iconic transverse engine layout and are in for a shock, again. The bonnet feels as tiny as a big glove box, you can see the head of the engine nestled dead centre in the engine bay, and the bottle-shaped SU carburetor sticks out near the firewall. But where’s the gearbox? Under the engine and inside the oil sump for better packaging, of course. And that means all Minis have something really important – near-equal-length driveshafts for reduced torque-steer – something that proved quite important when it came to harnessing the power of the Cooper S Monte Carlo Rally-winning cars. What catches your eye next is that the radiator has been shifted too – to allow the fan to run off the end of the crank – and now sits on the right side if you are facing the bonnet. The fan is reversed, however, so that it’s blowing air, rather than sucking it. The other revolutionary thing on this car is the suspension – this car has no conventional coil springs. With so little room to play with, the Mini uses complex rubber cones instead. Approximately the size of pine cones, these rubber units actually give the Mini a variable spring rate, and later, Hydrolastic ones were even fluid-filled for a better ride.

The modern Mini convertible, in contrast, is totally conventional, just like any current front-wheel-drive car. But because it has been given the Cooper treatment, it’s pretty sporty to drive. And that’s despite the 1.6-litre motor making only 121bhp and the car weighing much more than the hardtop. Initial responses from the engine are pretty lethargic, but the motor wakes up halfway up the powerband. Performance after that is decent, with 100kph coming up in 13.3sec. The handling is nice and sporty. It’s no Cooper S, but because the suspension is more pliant, it feels more comfortable, perfect for those late-night drives with the hood down. There is, however, a fair amount of scuttle shake over poor bits of road due to the chopped roof – the body gives you a secondary vibration after a wheel has travelled over a big bump.

In total contrast, the Minis from the ’60s feel as stiff as a board and very modern, way stiffer than other cars from the ’60s. So strong is the lore of the 1969 movie The Italian Job and the Cooper S rally car that both these classics have been given white roofs and bonnet stripes. But they lack the go of the fully modded engines. Still, the go-kart-like handling is apparent. Flickability is massive – the stiff suspension and direct unassisted steering mean this is a car you can really chuck around. Drive a Mini for 10 minutes and you’ll understand how this little fly of a car, powered by a ‘hulking’ 1200cc engine, went on to win the Monte Carlo Rally several times.

There’s also a surprising amount of room on the inside. Issigonis did away with wind-up windows to create more width and elbow room, and because the Mini has a wheel at each corner, the cabin is pretty useable too. There’s a really useful shelf at the base of the windscreen on which to keep your odds and ends, the front seats can be tilted forward with just two fingers and there’s even a tiny bustleback-like boot in the rear.

Sure, BMW has done a stellar job with the new Mini and there genuinely is plenty of appeal here, but the modern car’s got nothing on the old car. The original, however you look at it, is an unadulterated work of sheer genius.

A big thanks to Sameer Kadam and Anand Puranik for lending us their classic Minis.