Fords of the Future

What happens when a carmaker known for some of the best everyday driver’s cars around announces it wants to take away the driver altogether? 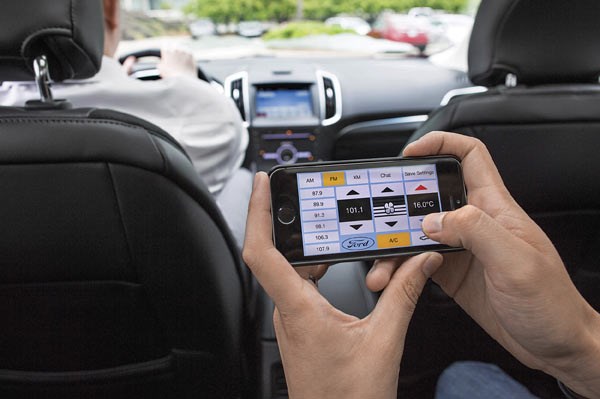 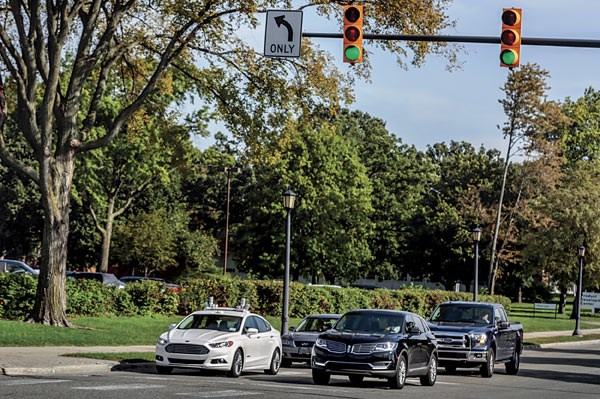 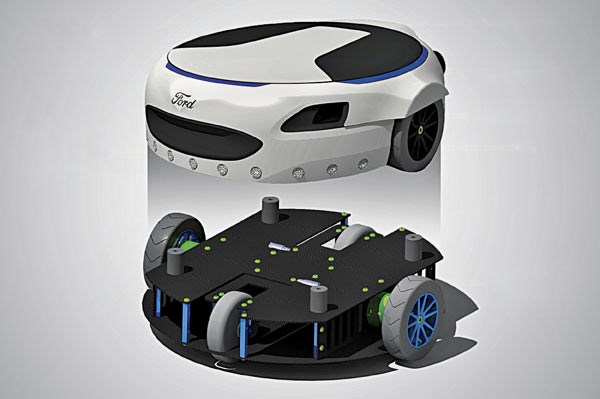 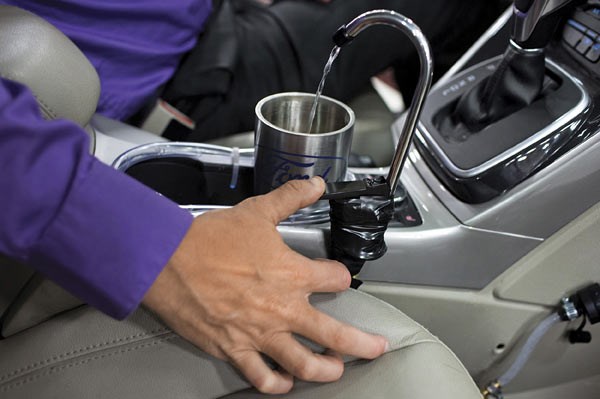 Automotive conferences don’t usually have a professor of psychology and behavioural economics to deliver the opening speech. But the sixth annual ‘Further with Ford’ conference had just that, which also indicates how different the future at Ford Motor Co really is. With liberal doses of humour and psychology, Dan Ariely of Duke University provoked the audience into thinking how they could do things in the present to make the future better. In a way, he was linking it with Ford’s plans to build autonomous cars for commercial operations such as ride sharing. “We are moving from owning cars to sharing them. Ford is looking at mobility through a new lens,” Ford chief executive Mark Fields said at the meet.

With an investment upwards of $4.5 billion, leasing the fourth floor of Michigan University’s new robotics lab, doubling the headcount at its own Palo Alto, California research labs, and buying into Chariot – a crowdsourced shuttle service, Ford is geared to produce fully autonomous cars in volumes by 2021. The Tesla Model 3, it seems, was a big wake-up call.
The automaker from Dearborn, Michigan has come a long way since 2004, when it first participated in the DARPA Grand Challenge – a driverless car competition funded by the US Department of Defense. Among the finalists from 2005 to 2007, Ford has made driverless cars its main focus. 2008 onwards, it continued to build the technology, launching a fleet of 10 Fusion Hybrid autonomous vehicles in 2013, and advancing into engineering from testing in 2015. Ford now says it will have an initial fleet ready for ride-sharing operations by 2018, and a mass-produced, fully autonomous SAE Level 4 vehicle without a steering wheel or accelerator pedals by 2021. That is not too far off, is it? 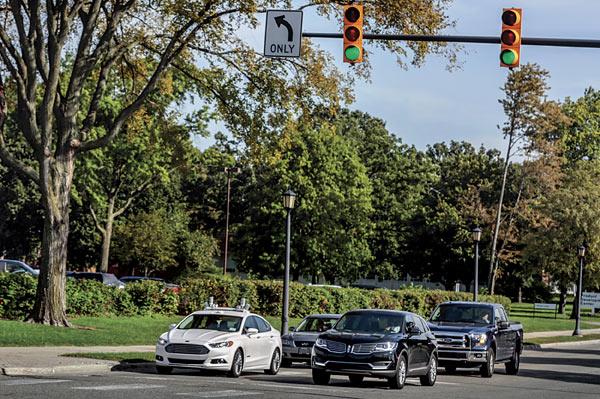 The autonomous Ford complies with all traffic rules, including signals and junctions.

It was time to travel in a Ford autonomous test vehicle. Having ridden in a Bosch test mule a couple of years ago, I wasn’t expecting a radically different experience. On the road, a Ford self-drive doesn’t take directions from the normal GPS mapping – its own system overlays the existing maps in real time for accuracy down to a centimetre. This is done by LiDAR – laser-based scanners, which constantly collect data, sweeping a range of 80-100 metres – a radius Ford plans to expand by the time the final production cars roll out. It will also use Velodyne’s advanced Solid-State Hybrid Ultra ‘Puck’ Auto sensor for precise, real-time 3D models of the surrounding environment which will help the autonomous car handle a broader range of driving scenarios.

There are also a host of sensors and cameras that work with the in-built safety systems to feed data into the car continuously. So much so, the system has been built to be overly cautious as we soon find out at a crossroad. There was a scenario where two women were chatting at the corner of the road. The car refused to proceed until they moved. Though a Ford driver sat at the wheel for safety, it was eerily wonderful to watch the car steer itself, stop at red lights, politely let pedestrians cross and navigate junctions in full compliance with rules and speed limits. Ford, however, clarifies that it has yet to figure out the nitty-gritty, like how two cars will communicate when they encounter each other, especially at crossroads.
What is clear is that, unlike other companies that are in the race to provide driverless cars as a personal mobility solution, Ford is looking more at a ride-sharing or ride-hailing business model for its autonomous future. So don’t worry, the Blue Oval may be ditching some drivers, but the STs, RSes and GTs will still be yours for the driving in the future.

Three other innovations were introduced to us at this conference, which came up as a result of an internal competition. We had to vote for the one that we thought deserved to win.

KILLIAN VAS, a Ford systems engineer, realised the rigours of a last-mile commute despite owning a car. Parking space is often away from the home or office, and one has to lug their stuff for a distance. His solution was a four-wheeled electric pedestrian assistant called Carr-E which could transport either a person or goods, autonomously, of course. 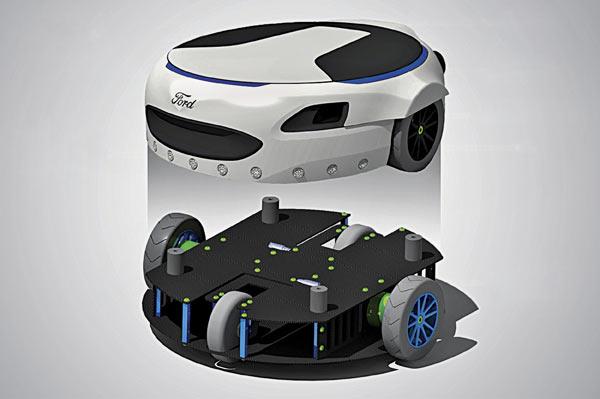 OLEG GUSHIKIN, Ford technical leader for advanced connected services, while trying to get a cab driver in China to change the AC temperature got the idea. He developed an app that could control the car AC or the radio system via a smartphone. It could even enable a translated conversation. 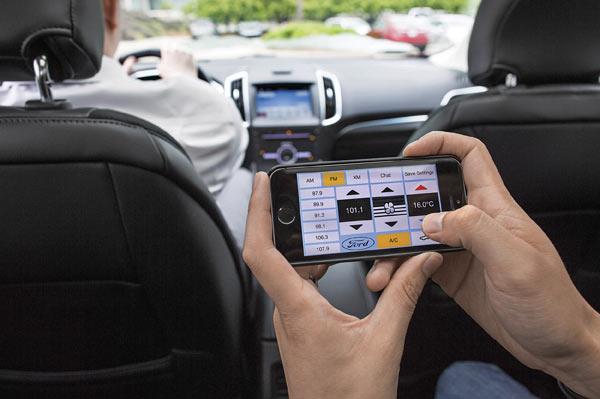 DOUG MARTIN, a Ford powertrain control engineer, provided a recycling solution to a car’s AC condensation that normally left a puddle on the road. He showcased a system combining a collection tray, filter, pump and a dispenser to convert this condensation into potable water rerouted into the cabin. 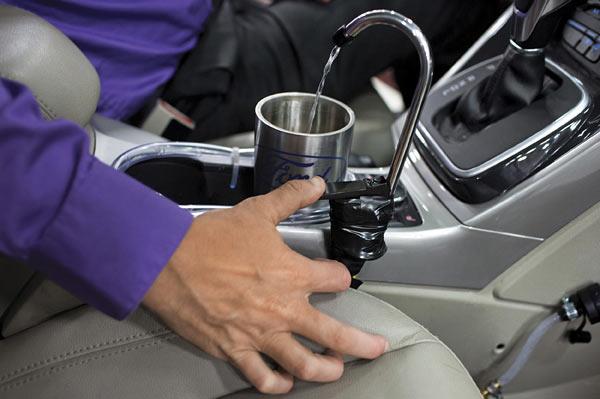