The personal utility vehicle, now BS IV compliant, receives a bump in power and packs in good features for the price that it is offered at. 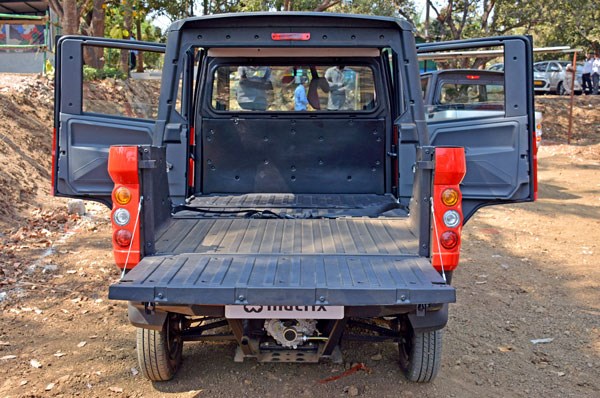 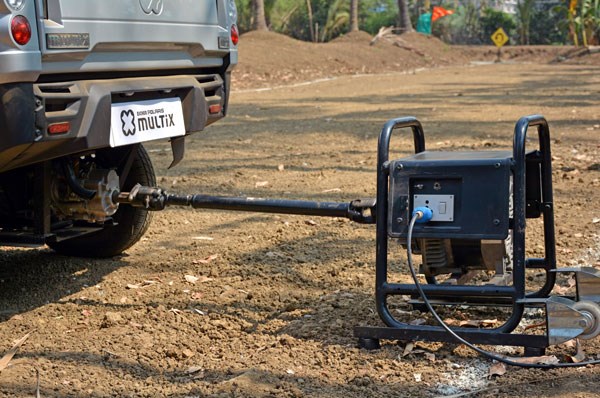 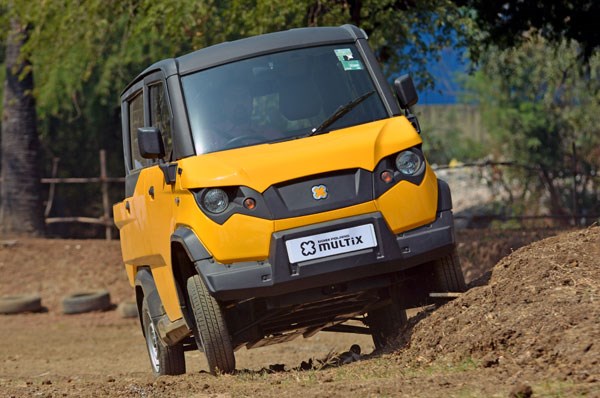 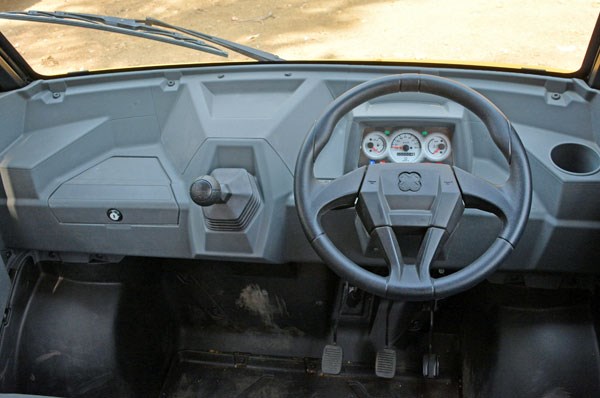 The quirky-looking passenger and goods carrier Multix that you see here is the first product from the joint venture between motorcycle and commercial vehicle manufacturer, Eicher Motors, and US-based powersports vehicle manufacturer, Polaris Industries. First launched in 2015, the Eicher Polaris Multix was upgraded recently to meet the BS-IV emissions standard that is set to become a mandatory requirement for all vehicles on sale from April 1, 2017.  While it was initially available for sale only in Kerala, Karnataka, Odisha and Tamil Nadu, the Multix will now be available in additional states across the country. We get our hands on the personal utility vehicle at an off-road adventure track in Mumbai to see what it is capable of.

The Multix was designed keeping in mind the requirements of an independent rural businessman, according to the company. It aims to fulfil their personal needs, that of transporting their family as well as meeting business needs which may include accommodating tools, machinery or goods. As I found out after a short drive around the track, while sitting at the rear, the utility vehicle can accommodate five average-sized adults rather comfortably and also boasts of a storage capacity of 418 litres which is extendable to 1,918 litres. The latter is possible after dismantling the rear glass, folding the rear seat, and removing the rear cover, which converts the Multix into a goods carrier within three minutes. So it can transport not just people, but also a dozen crates of veggies, for instance, with relative ease. 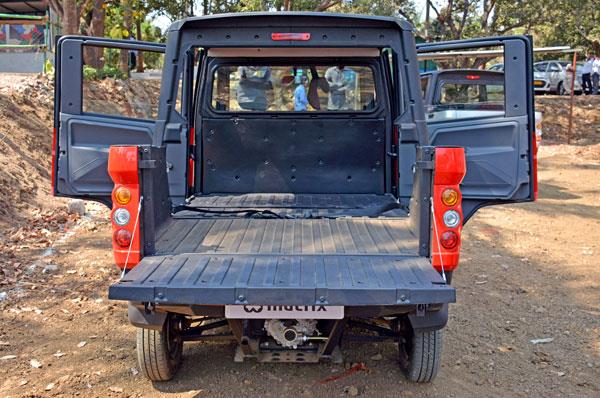 Additionally, the utility vehicle is equipped with what Eicher Polaris calls ‘X-Port’, a power take-off (PTO) point which can generate power of up to 3KW that can be used for generating electricity for running refrigerators, lighting up homes and also powering machinery such as drilling machines and water pumps. A PTO or a driveshaft (commonly found on a tractor) transfers power from the engine to the rotary input shaft of the generator and can be easily connected and disconnected.

“The idea behind providing the X-Port was to optimise the utility of the vehicle and reduce the things a businessman has to buy or hire (such as a tractor), thereby lowering his operating costs,” Pankaj Dubey, CEO of Eicher Polaris told us.

After making myself familiar with the vehicle and its capability, I then take the driver’s seat to see what the Multix is like from behind the wheel. You sit quite high up in the Multix and outside visibility is good, but there’s nothing to focus on in the cabin. The interior is as Spartan as they come. The steering wheel is simple but hefty and the gear knob is integrated in the dashboard. There is no power steering or AC and a cupholder on the right side of the dash and a glovebox on the left are the only storage areas. The instrument cluster is equally no-frills. It houses a basic speedometer and a fuel and temperature gauge. Overall, the interiors are strictly utilitarian and the build quality could have been better, but that shouldn’t be a cause for concern given the price. 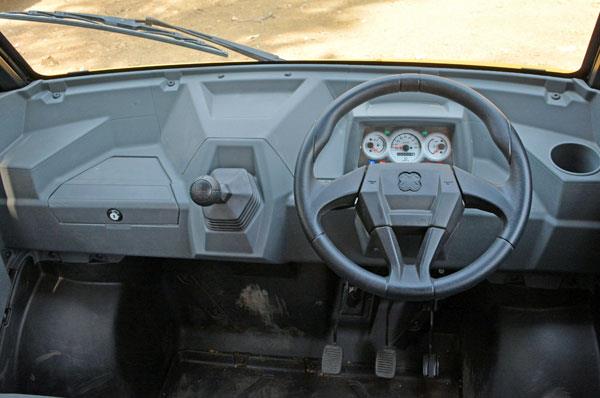 The Multix is powered by a 652cc diesel engine developed by Greaves Cotton. Interestingly, along with making the vehicle compatible to meet BS-IV emission norms, Eicher Polaris has also bumped up the power and torque rating. The single-cylinder four-stroke engine now makes, ahem, 12.98hp at 3,000rpm, up over 3hp from earlier and 37Nm at 1,600-2,000rpm, up a significant (relatively speaking) 10Nm. The engine is mated to a four-speed manual transmission which delivers power to the rear wheels. “One of the feedbacks we received from our customers when we launched the Multix (BS III) in 2015 was that the power output could have been better. Hence, we decided to improve power output when we made it BS IV-compatible,” Dubey said.

Upon powering up the Multix, the motor lets loose a familiar diesel engine thrum. There’s a surprising level of pulling power at the lower end of the engine rev range and the vehicle builds up speed swiftly right up to the mid range.  On the custom-made off-road track, the Multix manoeuvred through humps, over wooden logs, stones and slopes with relative ease. It should be good in a typical rural setting. The ride was again smooth, thanks to an independent suspension system – dubbed Pro Ride – at the front and rear. And the ground clearance, at 172mm, was sufficient to clear the obstacles too. Moreover, vibrations in the cabin, surprisingly, weren’t as bad as we imagined from a big single-cylinder engine. With a turning radius of 3.93 metres, the vehicle also proved to be nimble in tight turns. The exceptional manoeuvrability should be a boon in rural areas. However, we felt that the brakes lacked adequate bite. 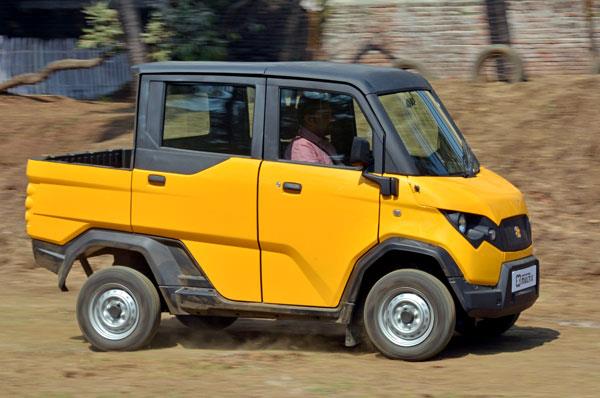 The Multix BS-IV delivers an ARAI-rated fuel efficiency of 27kpl, which should be a number that interests its target customer – a businessman or trader for whom rationalising costs is important. The Multix is available in two variants, AX+ and MX, and is priced at Rs 3.19 lakh for the AX+ and Rs 3.49 lakh for the MX (all prices ex-showroom, pan India). In a bid to appeal to more customers, Eicher Polaris is planning to rapidly expand its footprint in the country.  According to Dubey, in the next five months, the joint venture plans to take the count of dealerships to 150, up from around 60 dealers at present.