Vettel quickest on day one at Barcelona 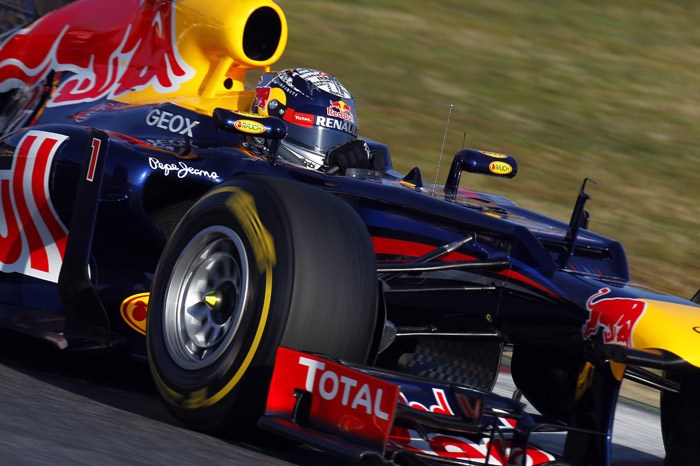 Sebastian Vettel put Red Bull on top of the first day of pre-season testing at Barcelona.

The German had risen to the top of the timesheets shortly before lunch, displacing compatriot and Force India pilot Nico Hulkenberg.

With warmer track conditions not as conducive to chasing times, many teams opted for longer run programmes, but Vettel was able to slightly better his time to end the day with a 1m23.265s.

That effort, set on Pirelli's hard compound - rather than the medium on which he set his morning best – put him 0.175s clear of the field as the chequered flag brought the first day of testing to a close.

Vettel's improvement proved the exception rather than the rule, with second through to seventh position not changing in the afternoon.

That meant Nico Hulkenberg ended the day second fastest for Force India, having set the pace for much of the morning until Vettel's late lap.

The German managed nearly 50 laps in the afternoon, but did not get within a second of his previous benchmark.

The same was true of Lewis Hamilton, who completed several long-lap simulations in the second half of the day. The Briton trialled a variety of compounds, and was consistently in the mid to high 1m28s.

Daniel Ricciardo likewise set his best time in the morning, less than three hundredths of a second down on Hamilton. The Australian was the last man to break the 1m24s barrier.

Fernando Alonso ended the day fifth fastest in the Ferrari F2012, having also completed an 18-lap run with an average of 1m26.208s in the final hour.

The Spaniard ended just five hundredths clear of Michael Schumacher, who managed 51 laps in what was the first day of testing for Mercedes' new W03.

Sergio Perez was the last driver to get within a second of Vettel, although the Mexican's afternoon programme was disrupted by an issue with the rear anti-roll bar.

Heikki Kovalainen too suffered a truncated day, as a broken track rod left him stranded sideways at the final turn after just nine laps of running.

The team was able to fix the issue and he returned in the afternoon, eventually getting down to a 1m26.035s – enough for ninth, just behind Bruno Senna in the Williams FW34.

There were issues too for Lotus, with Romain Grosjean reporting a strange sensation from the team's second chassis.

As a consequence the Frenchman completed just seven laps before the team decided to halt operations. It will fly the first chassis, which was used at Jerez, out to Barcelona and expects to take part tomorrow.

With HRT opting not to run, Marussia's Charles Pic rounded out the day's runners, 4.7s down on Vettel. The Frenchman racked up 121 laps – the most of any driver - on his first day in the car.