Rowland and Massa complete the podium; da Costa disqualified for running in too high a power mode. 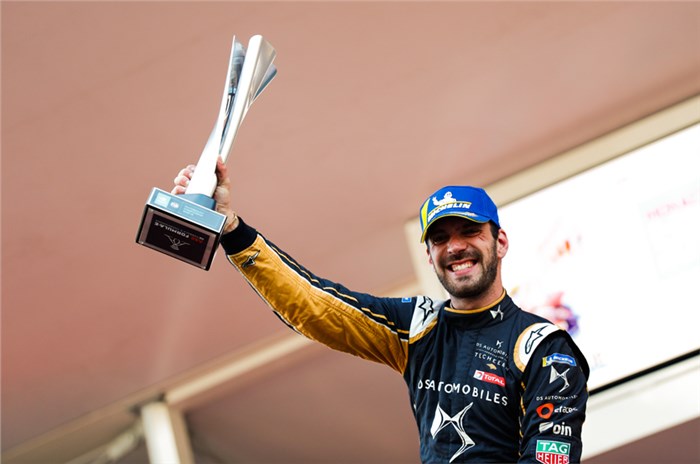 DS Techeetah driver Jean-Éric Vergne took a lights-to-flag victory at the 2019 Monaco E-Prix and become the first driver to clinch a repeat Formula E race win this season. However, it was far from an easy victory for Vergne. The French driver came under pressure from Oliver Rowland, Felipe Massa and Pascal Wehrlein in the closing stages of the race.

Rowland had set the fastest lap time in the Super Pole session, but had to start the race from 3rd place due to a grid penalty he’d received for an incident in the previous round in Paris. Starting from pole, Vergne held on to his lead at the start of the race with Wehrlein and Rowland in tow. A few minutes into the race, Wehrlein locked up and went wide at Turn 1, dropping to 4th place and promoting Rowland and Massa to 2nd and 3rd place, respectively.

Vergne had managed to briefly widen his lead; however, Rowland amped up his pace in the last few laps. Similarly, Massa was also forced to defend his position as Wehrlein made several attempts to clinch the final podium spot. Ultimately, the top four line-up remained unchanged, with Vergne fending off Rowland to win the race and Massa completing the podium. Wehrlein just missed out on a podium finish, taking 4th place for Mahindra Racing, followed by Sébastien Buemi in 5th place.

António Félix da Costa crossed the line in 6th place but was later disqualified for running in too high a power mode in the closing stages. Daniel Abt and Robin Frijns also received post-race penalties. Abt dropped from 8th to 15th place in the final standings after being handed a 33sec penalty for colliding with Oliver Turvey, forcing the latter to retire from the race. Frijns retired from the race after making contact with Alexander Sims and has been handed a five-place grid penalty for the next race in Berlin.

This has promoted Mitch Evans to 6th place, followed by André Lotterer in 7th and Alex Lynn in 8th. Stoffel Vandoorne and José María López were also promoted into the points in 9th and 10th place respectively. Mahindra Racing’s Jérôme d’Ambrosio finished the race in 13th place, but was later promoted to 11th after all the post-race penalties were applied.

Lucas di Grassi and Sam Bird made some big gains after having to start the race from 13th and 14th place respectively. With 22min left on the clock, Bird had already climbed up to 8th place with di Grassi behind him in 9th place. However, both drivers ended up retiring from the race – di Grassi had to retire with suspension damage after Sims forced him into the wall at Turn 3, while attempting to pass Bird. Bird’s Envision Virgin Racing car grinded to a halt on the very last lap of the race after picking up a puncture.

With two race wins to his name this season, Vergne now leads the drivers’ standings by just one point from his teammate Lotterer.