The ex-Formula 1 driver found nearly one second in the early stages of the third qualifying session. 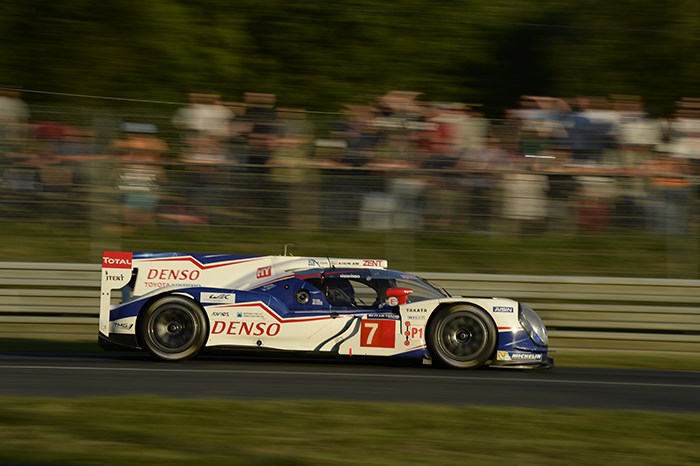 Kazuki Nakajima gave Toyota pole position for the Le Mans 24 Hours as the leading LMP1 cars set their fastest times of the event so far in final qualifying.

The ex-Formula 1 driver found nearly one second in the early stages of the third qualifying session, which started 30 minutes early to make up for lost track time so far this week.

Most of the action came in the early part of the session before darkness set in, with Nakajima the only driver able to get under the 3m22s bracket with a 3m21.789s.

"Pole is important and to start from pole position - even though it is 24 hours - is great," said Nakajima.

"It's a very good feeling and I am really happy with the car. I was struggling with the traffic but I managed to get one lap and it was just enough.

"It's going to be a tough race but tonight I am happy."

Romain Dumas was able to keep Porsche on the front row for its topline return to Le Mans by improving to a 3m22.146s, while Sebastien Buemi moved the second Toyota TS040 HYBRID from fifth to third, 0.7 seconds adrift of his team-mate.

The #20 Porsche 919 Hybrid, which held provisional pole after Wednesday's opening qualifying session, did not improve its time, leaving it fourth on the grid ahead of the three Audi R18 e-tron quattros.

Only one of the Audis - the #1 car - improved its time, but it still brought up the rear of the factory LMP1 runners in seventh.

Audi and Porsche both started readying new tyres for the final 15 minutes of the session, but any hopes of having another push for pole were dashed when race control announced that a yellow flag 'slow zone' was to be in place until the finish following Karun Chandhok's crash at Indianapolis in the Murphy Prototypes ORECA.

The #2 Audi caught the eye in the final minutes when Andre Lotterer set a best overall time through the first sector, but due to the slow zone he was unable to improve on the car's best lap.

Tristan Gommendy gave Ligier pole position in LMP2 for TDS Racing, his 3m37.609s being good enough to keep him clear of Harry Tincknell's best in the Jota Zytek.

Gianmaria Bruni took GTE Pro pole for the #51 AF Corse Ferrari, wasting little time at the start of the session before deposing the provisional pole-sitting #73 Corvette.

While Antonio Garcia responded to the other improvements in the class to earn best of the rest honours for the #73 car, he was in fact the third fastest in GTE as ex-GP2 racer Sam Bird got the #81 GTE Am Ferrari between the top two Pro cars.

The next best GTE Am car was one second back - the #98 Aston Martin in the hands of Pedro Lamy - but there were five Pro cars between him and Bird in the overall standings.

The Nissan ZEOD set its fastest time yet around the Circuit de la Sarthe as the experimental Garage 56 entry had its best session of the week in terms of pace and mileage.

Lucas Ordenez's 3m50.185s was enough to get the #0 car ahead of all of the GTE runners, leaving it nearly six seconds adrift of the slowest LMP2 runner.

Several cars will be investigated overnight for speeding in the slow zone.