Marquez stretches his lead at the top of the standings with his German GP win; Maverick Vinales and Cal Crutchlow complete the podium. 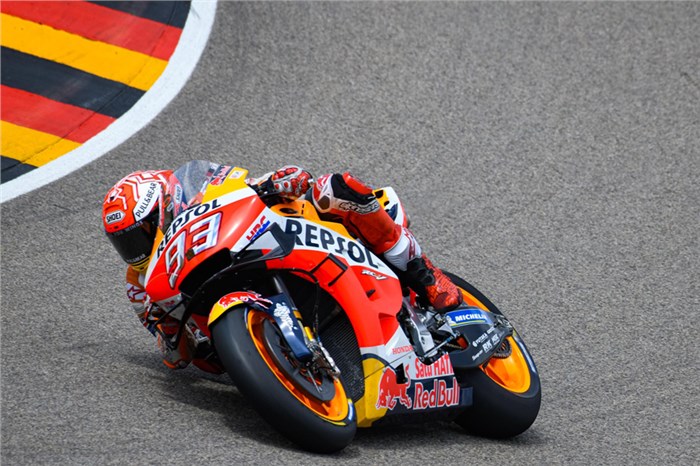 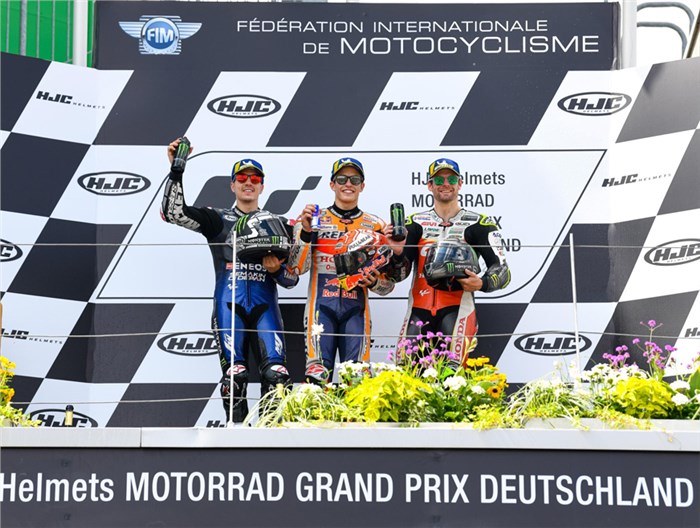 Honda’s Marc Marquez stormed to victory at the Sachsenring to collect his 10th consecutive German GP victory – his seventh in the premier class. Marquez’s latest race win sees him head into the summer break with a healthy 58-point lead over Ducati's Andrea Dovizioso in the championship.

Marquez didn’t have the best of starts and it was Fabio Quartararo who got away quickest from the lights, but Marquez out-braked the Petronas Yamaha SRT rider to take the lead heading into Turn 1. Quartararo then slipped down to 6th place before crashing out on Lap 2 while attempting to pass Danilo Petrucci. Out at front, Maverick Vinales was briefly able to challenge Marquez but was unable to find a way past and his hopes to take the race win faded after Alex Rins overtook him.

Rins himself was unable to keep pace with Marquez and his attention then shifted to the battle for second place, with Vinales and Cal Crutchlow just behind him. With 12 laps to go, he was running 0.9sec clear of Vinales when he crashed out of the race after making a costly error at Turn 11. The incident promoted Vinales and Crutchlow to 2nd and 3rd respectively, while also handing Marquez a dominant 4.9sec lead, with 12 laps to go.

Eventually, Marquez went on to win with a 4.5sec margin, further cementing his reign as ‘King of the Ring’. Crutchlow followed Vinales closely for majority of the race, but gave up the chase after suffering a scare at Turn 10 and settled for 3rd place – his first podium finish since the season-opening Qatar GP.

It was a tightly fought battle for 4th place, but Petrucci ultimately gained the upper hand over his teammate Dovizioso, while Jack Miller slotted into 6th place. Joan Mir took 7th, picking up his second consecutive top-10 finish in the process. He was followed by Valentino Rossi, who ended his run of three-straight DNFs with an 8th place finish at the Sachsenring. Franco Morbidelli and Stefan Bradl – Jorge Lorenzo’s replacement at Honda – wrapped up the top 10. The latter was promoted to 10th place after Aleix Espargaro suffered a late-race crash.