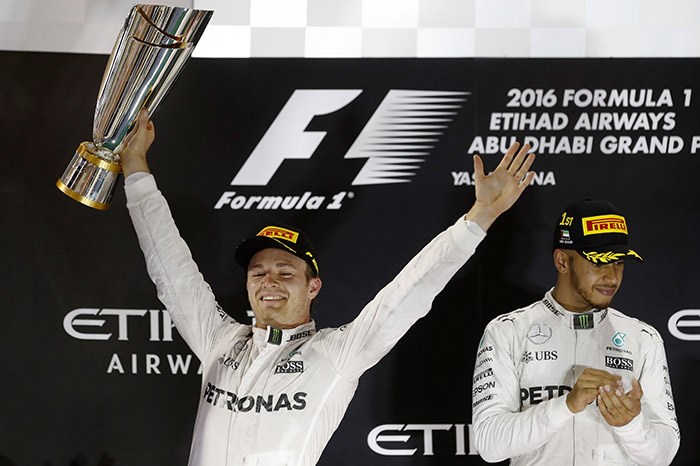 Rosberg entered the 21st and final grand prix of the season with a 12-point lead and simply needed to be third or higher to take the title no matter where Hamilton finished.

Hamilton kept the pace slow in the final stint when leading Rosberg, backing the German into the pack, despite persistent calls from his Mercedes team to up speed.

But the tactic failed to pay off, with Rosberg soaking up the pressure from Vettel to guide his car home second.

As a result, Rosberg won the world title by five points at Yas Marina to become F1's 33rd world champion, 34 years after his father Keke achieved the feat.

Hamilton led Rosberg away at the start but the duo did not pull away from Kimi Raikkonen, who jumped Daniel Ricciardo, and Vettel.

Rosberg pitted a lap after Hamilton, ditching the ultra-softs for the softs, and like Hamilton was held in his box while a Ferrari entered the pits.

He rejoined behind Max Verstappen, who had spun at the first corner after contact with Nico Hulkenberg and had cut his way back through the field on the super-softs and was looking to extend his stint.

Mercedes told Rosberg he needed to pass Verstappen because the Dutchman was driving purposefully slow, setting up a tense couple of moments as the two went wheel-to-wheel with the Red Bull holding firm.

After backing off for a few laps, Mercedes told Rosberg to attack again and this time, the German made a pass stick through Turns 8 and 9 before covering the line into Turn 11 to retake second.

The second stops for both Hamilton and Rosberg were smooth, with the duo retaining formation as they rejoined second and third behind Vettel, who was running a long second stint, until the German pitted.

The gap hovered around the one-second mark for much of the remainder of the race, with Hamilton appearing to attempt to back Rosberg into the chasing pack.

The main threat was Vettel, who was last of the frontrunners to make a final stop and took on fresh super-softs. He passed both Red Bulls and closed in on the two Mercedes, bringing Verstappen with him.

Rosberg complained Hamilton was too slow while Mercedes instructed Hamilton to up the pace, including a message from technical boss Paddy Lowe, but the Briton replied at one point "let us race".

Ultimately, it didn't pay off as Hamilton crossed the line to win his 10th grand prix of the season, compared to nine wins for Rosberg, with his team-mate second.

Force India's Hulkenberg and Sergio Perez were seventh and eight respectively, securing fourth place in the constructors' championship for the outfit for the first time.

Felipe Massa finished the final race of his F1 career in ninth, with Fernando Alonso completing the top 10.

The Spaniard's McLaren team-mate Jenson Button had a disappointing final race before his likely retirement, the Briton hitting a kerb at Turn 10 hard, causing damage to the steering and forcing him out.

Carlos Sainz Jr retired with a gearbox problem, moments after he was hit by Renault's Jolyon Palmer, while his Toro Rosso team-mate Daniil Kvyat also failed to finish.