Driving for Fortec motorsport, the Indian’s finished ninth in the first practice and was fastest overall in the second practice session. 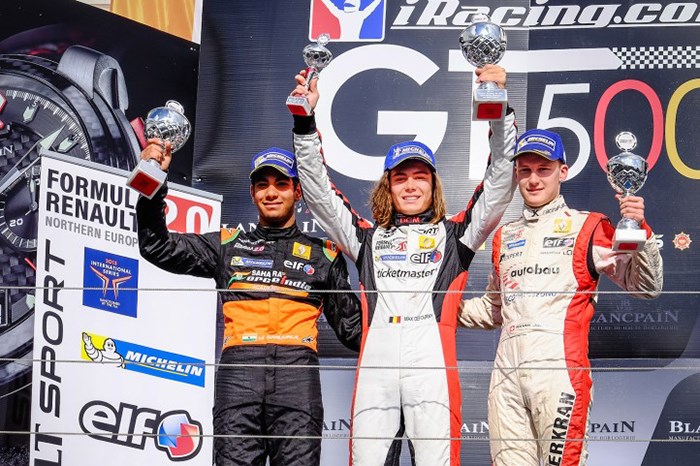 Sahara Force India protege Jehan Daruvala continued his strong form in the Formula Renault 2.0 NEC championship after finished second overall and the best rookie at Round 6 held at Nurburgring in Germany.

Daruvala has dovetailed his campaign with a few rounds of the Formula Renault 2.0 Eurocup as well, and after participating in two consecutive Eurocup rounds at Silverstone and Nurburgring, was back in his main championship this weekend.

Driving for Fortec motorsport, the Indian’s weekend kicked off on a positive note as he finished ninth in the first practice and was fastest overall in the second practice session.

Heading into the weekend, Daruvala was second in the rookie standings and sixth in the overall standings.

During qualifying, Daruvala managed P5 in the first session, 0.329 seconds off polesitter Sasahara and improved during his second qualifying, putting the car on the second row in P3.

Race one saw Daruvala move up to fourth in the opening stages but a safety car period and a subsequent poor restart saw the India losing a place to Stefan Riener and he eventually finished fifth and the best rookie.

Race two, Daruvala held his third place at the start but was under pressure from Max Defourny, who eventually passed the Indian right before a safety car period triggered due to a clash between leaders Sasahara and Deletraz.

With both out of the reckoning, the Indian was promoted two places and held on to finish second – the best finish of his single-seater career.

Despite the incident, Deletraz maintains his championship lead with 288 points while Daruvala is sixth in the main standings and second in rookie standings with top rookie Defourny of 10.5 points ahead of the Indian.

The season finale of the Renault NEC 2.0 is scheduled on October 3-4 at Hockenheim.