Mumbai Falcons will team up with Italian squad Prema Racing for its second year racing in the Formula Regional Asian Championship. 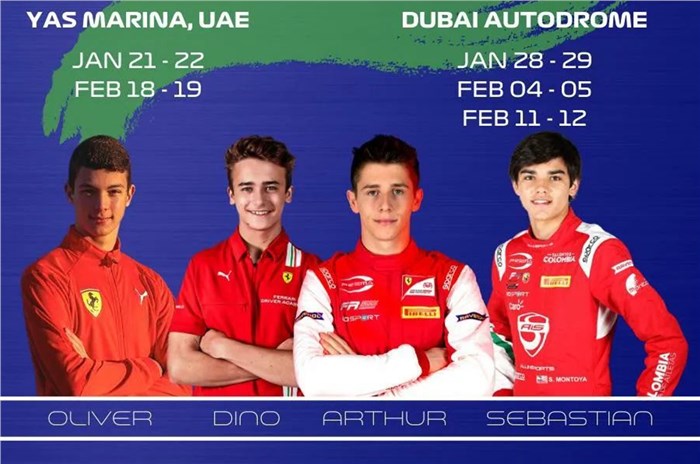 Ferrari has confirmed that three members of its driver academy – Arthur Leclerc, Dino Beganovic and Oliver Bearman – will race for Indian team Mumbai Falcons in the upcoming 2022 Formula Regional Asian Championship. They will be joined by Sebastian Montoya, son of former F1 driver Juan Pablo Montoya, in a part-time capacity.

Mumbai Falcons will field three cars, with support from Italian squad Prema Racing. The championship will be held entirely in the UAE and comprise of five rounds, with three races per round. The first round at Abu Dhabi’s Yas Marina track kicks off on January 22. Here is the full calendar:

Arthur Leclerc, younger brother of current Ferrari F1 driver Charles Leclerc, is the most experienced driver in the line-up. The 21-year-old has one full F3 season under his belt, where he finished 10th overall. He also participated in the 2020 Formula Regional European Championship. Beganovic, meanwhile, will undertake his second consecutive year competing in F3 Asia. The two will participate in all five rounds.

Oliver Bearman and Sebastian Montoya will split time in the third car. German F4 and Italian F4 champion Bearman will participate in the final two rounds. Not only will this be the 16-year-old’s first competitive F3 outing, but it will also be his debut outing as a member of the Ferrari Driver Academy. Montoya will also make the step up from F4 to F3. He’s competed in the German and Italian F4 championships in the past. Both drivers will be aiming to secure the Rookies title.

Mumbai Falcons’ 2021 F3 Asian Championship drivers, Jehan Daruvala and Kush Maini, won’t be returning. In fact, an FIA regulation change does not allow any F2-level driver to compete in the championship, which rules out Daruvala altogether.

Mumbai Falcons’ statement also briefly mentions that the inaugural Formula Regional and Formula 4 Indian Championships have been postponed to November 2022. The two championships were initially slated to start in end-February 2022.

Think the two new championships are the push Indian motorsport needs? Tell us in the comments below.