Massa finishes on top after the first test of 2010. 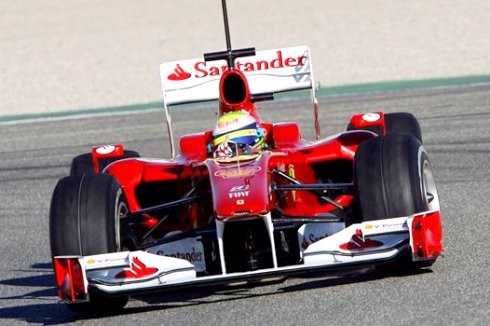 Felipe Massa marked his official return to F1 action with the quickest time on the opening day of pre-season Formula 1 testing at Valencia in Spain.

The Brazilian left it until the closing minutes of the day, following a brief red flag period, to set his best effort of 1m12.574s - giving a clear signal that he has lost none of his speed following last year's Hungarian Grand Prix qualifying accident.

Massa had been quickest in the morning and, although losing the top spot early in the afternoon to BMW Sauber's Pedro de la Rosa, he moved back to the top near the end.

De la Rosa's effort was perhaps one of the biggest surprises. Just 24 hours after his BMW Sauber team made a low-key unveiling of its unsponsored C29, de la Rosa showed that a lack of works support had not hurt the team at all.

"For me it was a very positive day," said the Spaniard. "The car was reliable right from the beginning, which meant we could follow our programme perfectly without wasting any time. Also the car reacted to our changes very well.

"For me it was a day to get used to not only the new car but also to the team with all the people. And, of course, driving-wise there's more to come from me as this was only my first day after a long break."

However, it was third fastest Schumacher's form on his return to F1 action that kept tongues wagging - as he quickly got up to speed in an impressive display.

The seven-time champion took over from team-mate Rosberg shortly before 3.30pm - steadily moving up the order as he got more comfortable with the car and new tyres.

He ended the day with a best lap of one minute 12.947s that came during the late flourish of quick times. It was less than four tenths slower than Massa and over half a second up on his team-mate.

Although testing times ultimately count for little, Schumacher will have taken some pleasure from outpacing Rosberg on his first day back in action.

Rosberg had kicked off Mercedes GP's testing programme in the morning, completing a total of 39 laps to set his best time of 1m13.543s - when track conditions were probably not as favourable as the afternoon.

And despite varying fuel loads making it difficult to judge the relative competitiveness of the teams, Rosberg was happy with his first impressions of the car.

Behind Rosberg, Gary Paffett went through detailed system checks with the new McLaren MP4-25 to set the fifth best time, ahead of Rubens Barrichello - who caused the only red flag of the day shortly before 4.30pm when he stopped on track.

Sebastien Buemi ended the day at seventh overall with his Scuderia Toro Rosso team struggling to fix a gearbox problem that brought an early end to his running.

He completed 10 laps in the morning and returned to action in the final minutes to just outpace Robert Kubica's Renault.

"My first day of testing the R30 went well," said Kubica. "We had a lot of things to check on the car to make sure they were reliable and all that went smoothly with no big problems to report.

"Tomorrow we will start working on the balance and trying to understand the car a bit more. The narrower front tyres certainly had an impact on the car, but it's difficult for me to judge as this is the first time I've driven the R30. Generally I think they will make the car understeer more in the quick corners."