Marquez won the three previous MotoGP races at the Circuit of the Americas, as part of a haul of seven wins from seven races in the US. 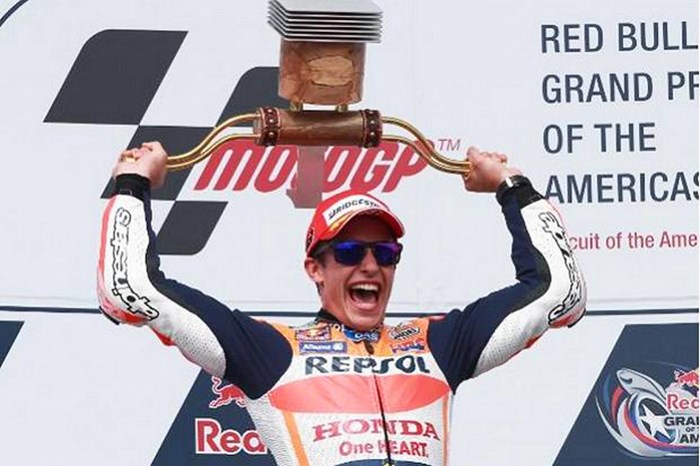 Honda's Marc Marquez maintained his perfect MotoGP record in the United States, with his second victory of the 2016 season at Austin.

Marquez won the three previous MotoGP races at the Circuit of the Americas, as part of a haul of seven wins from seven races in the US, along with two from two in Moto2.

From his fourth consecutive pole position at Austin, Marquez was never challenged after securing the lead from Jorge Lorenzo - who led into Turns 1 and 11 only to overshoot each time - on the first lap.

Lorenzo dropped behind Ducati's Andrea Dovizioso, and while he made it past on lap five, Marquez was already two seconds clear.

Marquez was relentless at the front, his margin eight seconds before backing off on the final lap, while Lorenzo settled for second, having crashed out of the race in Argentina last weekend.

With his 26th MotoGP victory, Marquez extends his championship lead to 21 points over Lorenzo.

The first half of the race was littered with incidents, before proceedings settled down.

Valentino Rossi was never a factor, falling to sixth place from the front row of the grid, before crashing at Turn 2 on just the third lap.

Rossi had been fighting with Dani Pedrosa, who caught Dovizioso, only to lose the front end of his Honda at Turn 1 under braking.

His bike cannoned into Dovizioso, who was eliminated from a race while in a podium position for the second time in seven days, while Pedrosa got back on but eventually retired.

That all helped Andrea Iannone bounce back from colliding with team-mate Dovizioso in Argentina with third place, his first podium and indeed race finish since the Australian Grand Prix last October.

Maverick Vinales lost ground on the first lap, falling from the second row to 10th, but aided by those incidents worked his way back to fourth, after passing Suzuki team-mate Aleix Espargaro, who flew early.

With a quiet sixth place, Scott Redding was the leading satellite rider and secured his best result in a dry MotoGP race.

Cal Crutchlow was fighting Redding for the position, but fell at Turn 11 on lap eight.

That prompted a fall from Bradley Smith behind him on the road, and while the pair did rejoin the race they finished well down the order.

With Crutchlow 16th and Smith 17th, the latter's run of 26 consecutive point finishes came to an end.