Starting from pole, Lorenzo produced a faultless display to resist Marc Marquez and Dani Pedrosa and claim a lights to flag win. 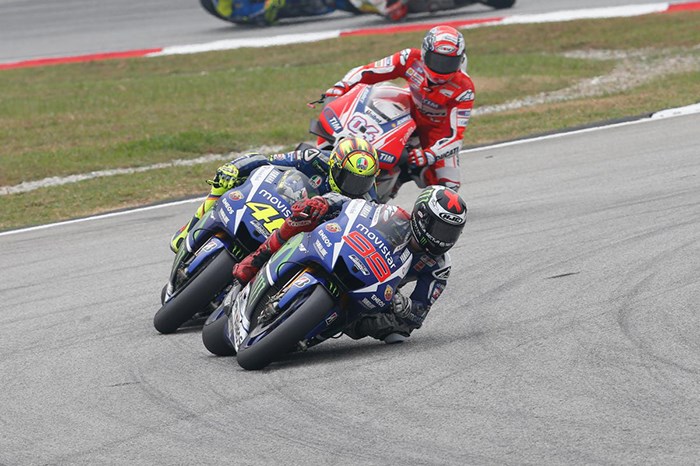 Yamaha's Jorge Lorenzo soaked up late pressure from the Honda riders to win the Valencia Grand Prix and the 2015 MotoGP title, with championship rival Valentino Rossi a beaten fourth.

Starting from pole, Lorenzo produced a faultless display to resist Marc Marquez and Dani Pedrosa and claim a lights to flag win.

Rossi charged from the back row of the grid after his Sepang penalty to finish a distant fourth, missing out on a 10th world title by five points to his Yamaha team-mate.

Lorenzo converted pole into an early lead from Marquez, as a fired-up Rossi carved his way through the order, taking 19th into Turn 1 and ending the second lap in 11th.

As Lorenzo and Marquez attempted to break clear of Pedrosa in third, a fall for fourth-place runner Andrea Iannone promoted Rossi into ninth.

The Italian quickly dispatched Bradley Smith and Danilo Petrucci to take seventh, before setting off after Andrea Dovizioso and the Espargaro brothers.

Rossi muscled his way past the two brothers, before sweeping past Dovizioso's Ducati for fourth, where his charge stalled, 11s behind Pedrosa in third.

Unable to match the pace of the frontrunners, Rossi settled for fourth on the road, leaving the Hondas to fight race leader Lorenzo.

With Lorenzo battling tyre wear, the two Honda riders closed on him into the closing stages, with Pedrosa reeling in his team-mate and the Yamaha.

Pedrosa briefly passed Marquez for second, only to concede the position back to his team-mate, which offered Lorenzo the respite needed to cross the line and win.

Aleix Espargaro was five seconds back, beating the charging Cal Crutchlow - the LCR Honda rider having started from the back after mechanical problems on the grid - and Petrucci to eighth.

Maverick Vinales rounded out his season with an 11th place finish for Suzuki, one spot ahead of Michele Pirro, riding a wildcard factory Ducati.

Nicky Hayden closed out his MotoGP career with a 17th place finish, while Hector Barbera claimed the Open class title ahead of his 2016 Avintia Ducati team-mate Loris Baz.