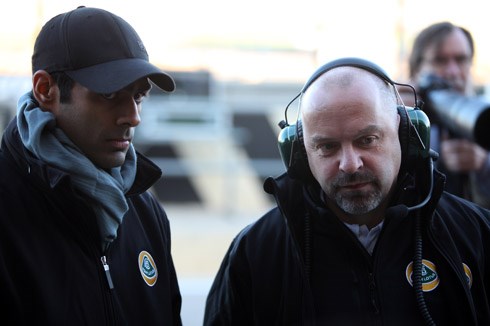 Indian driver Karun Chandhok has joined Team Lotus as its reserve driver for 2011 - and his duties will begin in Australia this weekend with him taking to the track for the first free practice session.

Karun, who raced the first half of last season for HRT, has been in talks with Team Lotus for several weeks now but only concluded his deal in the last few days.

He will now attend races in his role as official reserve and will also take part in a number of practice sessions – starting in Albert Park for the season-opening Australian GP.

"I've been talking to the team for quite a while about a role with them and I'm delighted we're now able to confirm that I will be driving for Team Lotus in 2011," said Chandhok.

"The details of exactly which sessions I will be in the car for are being worked out now and after having spent some time with them at the recent pre-season tests I can see exactly how passionate everyone in Team Lotus is about taking this team back to the top of the F1 grid.

"These are very exciting times for Team Lotus and it's a real honour to be able to play a part in helping shape this team's future. I want to thank Tony, Din, Nasa, Riad and Mike for having the faith in me to give me a chance to help the team develop and I'll do my best to repay that faith wherever I can."

Team principal Tony Fernandes added: "This is another great day for Team Lotus. Karun's appointment to our team gives us not only his immense driving talent and experience, both of which will help us develop the car even further, but also brings one of the warmest, most professional personalities I have the pleasure of knowing into the Team Lotus family.

"I do not think it is going too far to say that Karun represents the future of motor racing - he is living proof that geography is no boundary to talent and ambition and that you will succeed if you work hard and keep dreaming.

"He is fiercely proud of his Indian heritage but he has a truly global outlook and I am honoured that Team Lotus is now giving one of India's brightest stars the chance to continue to develop his talent.

"Everyone in the team is excited about working with Karun, and I cannot wait to see him representing the Indian nation in our car."