Petrucci finished 0.043sec ahead of Marquez in one of the most competitive races of the season. 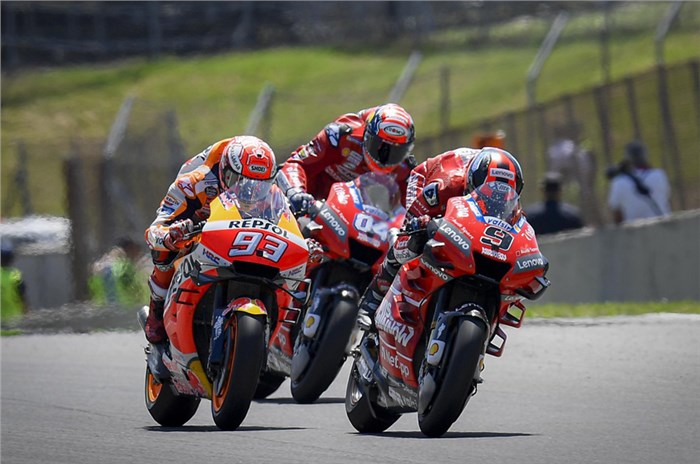 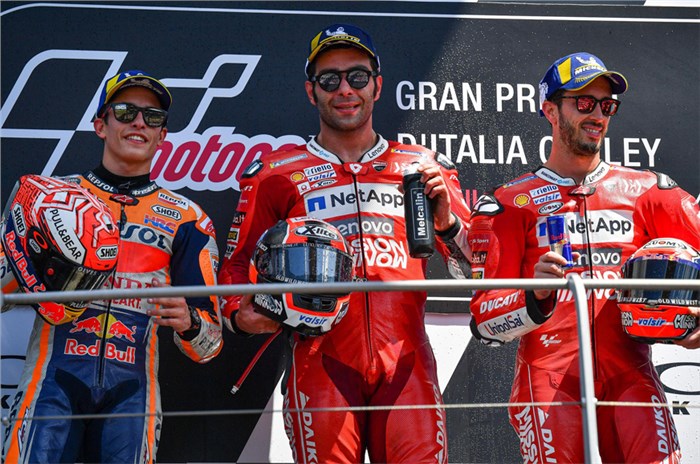 Danilo Petrucci beat Marc Marquez and Andrea Dovizioso to claim the first win of his MotoGP career, in what was one of the most closely contested races of the season, so far.

The race began in typical fashion for Marquez, with the Spaniard starting from pole and leading the pack off the line. Things were already looking great for Ducati with Dovizioso gaining seven places on the first lap itself to climb up to 2nd place, right ahead of his teammate Petrucci. Similarly, a strong performance from Suzuki’s Alex Rins saw him make his way to 4th place from 13th, in just two laps.

The long straight at Mugello was certainly where the most action took place, with the top three riders entering the first corer side-by-side, multiple times. While Petrucci moved into the lead on lap 11, Marquez soon found himself losing position, dropping to as low as 5th place at a time, but he was quickly able to recover to 3rd place. The leading pack of Petrucci, Dovizioso, Marquez, Rins and Jack Miller then broke clear of the rest of the field, however, Miller crashed out from 5th place on lap 16.

The drama continued until the very last corner, with Petrucci entering the last lap in the lead, only to be passed by both Marquez and Dovizioso. But the Italian rider stuck to his line and managed to move to the front again.

Petrucci may have enjoyed a successful home race, but some other Italian riders - Franco Morbidelli and Valentino Rossi - had a weekend to forget. Rossi started from 18th and an incident with Joan Mir saw him fall back to last place, only to crash out of the race in the following lap. Morbidelli, meanwhile, started from a strong 4th place but fell behind in the first few laps and crashed out a couple of laps before Rossi, throwing away another chance at a podium finish for the Petronas Yamaha team.

Rossi’s teammate Maverick Vinales fared better to bring the factory Yamaha home in 6th place, after slowly working his way up from 12th. Finishing ahead of him was satellite rider Takaaki Nakagami on the 2018-spec Honda – his best finish yet. Behind Vinales, Michele Pirro picked up 7th, followed by Cal Crutchlow, Pol Espargaro and Fabio Quartararo. Francesco Bagnaia’s crash on lap 12 made it a double DNF for Pramac Ducati, while Hafizh Syahrin (Tech 3 KTM) and Tito Rabat (Avintia) both retired in the pits.

Marquez’s 2nd-place finish means he extends his lead in the championship to 12 points ahead of Andrea Dovizioso.