Piloted by Guy Martin, the 1,013hp Infor Rocket Streamliner has become the world’s fastest ever Triumph by reaching a speed of 441.28kph. 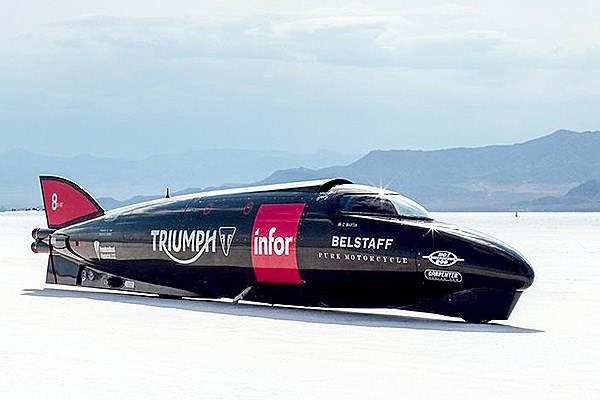 The Triumph Infor Rocket Streamliner, piloted by TT legend Guy Martin, has set a new Triumph land speed record by achieving a speed of 441.28kph at the Bonneville Salt Flats on August 8, 2016. The previous official and unofficial records stood at 395.35kph and 424.86kph respectively, both set by Bob Leppan in the Gyronaut X-1.

When asked about becoming the fastest ever Triumph record holder, Martin commented: “It’s good and we are moving in the right direction, but it is just one step on the way to what me and team are here to do.”

Triumph has had a long history with setting top speed records, and barring a brief 33-day period, have held the title of 'World’s Fastest Motorcycle' between 1955 and 1970, with streamliners like the Devil's Arrow, Texas Cee-gar, Dudek Streamliner and Gyronaut X1. In fact, the iconic Bonneville name (for the company’s motorcycle range) was conceived following Johnny Allen’s land speed record runs at the Salt Flats in September 1956, when he reached the record breaking speed of 311.76kph.

Speaking about the new Triumph record, Vimal Sumbly, Managing Director, Triumph Motorcycles India said: “I congratulate Guy Martin for achieving the feat of riding the fastest ever Triumph. We are keeping a close watch on the developments at the Bonneville Salt Flats and hope the new land speed record comes home.”