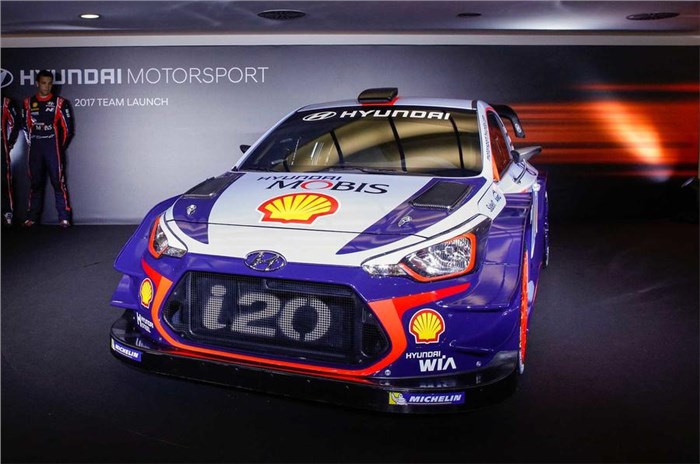 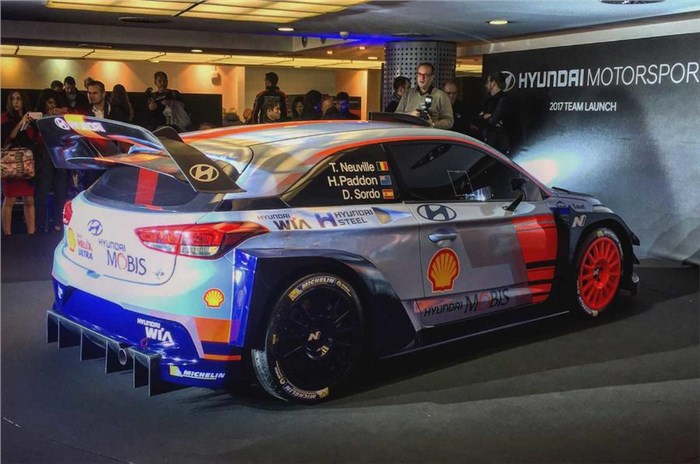 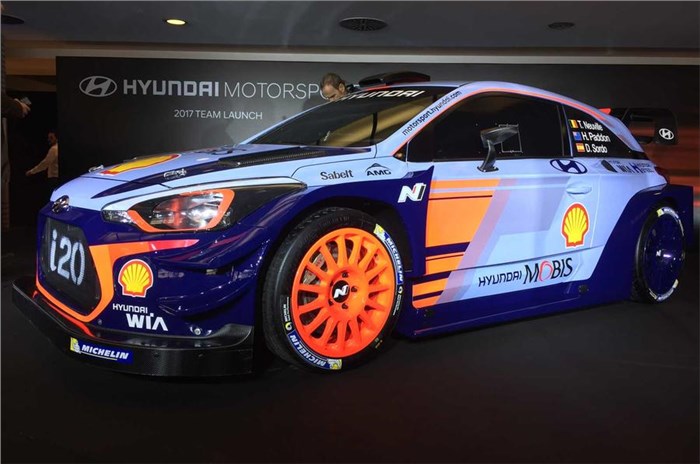 The Hyundai i20 Coupe has been revealed at Italy’s Monza Grand Prix circuit as a successor to the retired i20 WRC. The car will compete in next year’s rejuvenated World Rally Championship and, following Volkswagen’s departure, is a favourite to take the title.

The new three-door model is described as a heavy evolution of the outgoing car, using the same basic structure as 2016’s five-door i20 but conforming to 2017’s less-restrictive engine and aerodynamic regulations. As such, the car’s exterior wears a much larger rear wing and the front bumper works the air significantly harder than before with large, swooping winglets.

The i20 Coupe WRC’s 1.6-litre engine also uses a larger restrictor – up from 33mm to 36mm in diameter – so produces 381hp, significantly more than the 2016 car’s 335hp. Drive is sent to all four wheels through a six-speed paddle shift gearbox like before, but this time the drivers can adjust the percentage of torque sent to each end using a new active central differential.

When asked how much difference the upgraded drivetrain of the 2017 car would have on performance, both the drivers and team leaders said straight-line speed would improve, but it wouldn’t necessarily be noticeable to the naked eye. However, all agreed that the new car’s bigger aerodynamic package would make a large difference to pace, helping the 2017 i20 Coupe WRC to shave around 1sec per kilometre travelled from its stage times.

The Germany-based Hyundai Motorsport team’s 2017 WRC challenger has already completed close to 6,437km of testing. It’ll make its championship debut in the opening round of 2017 at the Monte Carlo rally in January. Three i20 Coupe WRCs will be fielded by Hyundai Motorsport, driven by the same line-up of drivers as before: Thierry Neuville, Haydon Paddon and Dani Sordo, with Nicolas Gilsoul, John Kennard and Marc Marti as their co-drivers.

With 2016 title winner Volkswagen no longer in the picture following the manufacturer’s departure from World Rally, Hyundai’s biggest rivals for the 2017 championship will be Ford, Citroën and Toyota, who is back in WRC for the first time in 17 years.