Hamilton wins 2019 Mexican GP to close in on title

Hamilton nursed home his tyres, making a 48 lap stint work to win the Mexican GP ahead of Vettel and Bottas. 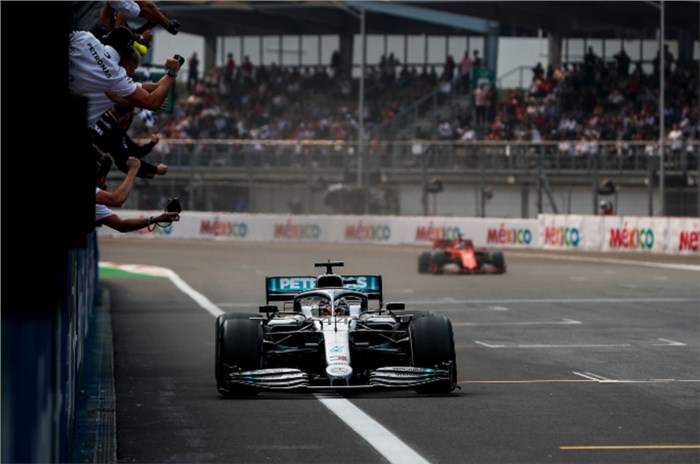 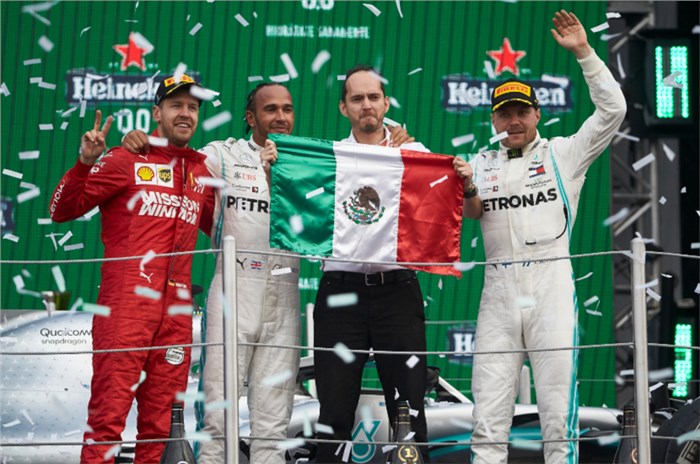 The 2019 Mexican GP ended up being a race of tactics, with Mercedes’ well-timed pit stop helping Lewis Hamilton secure his 10th win of the season, and the team’s 100th podium appearance as a constructor. While Hamilton failed to wrap up the drivers’ title at the Autodromo Hermanos Rodriguez, this race win helps him inch ever closer to his 6th F1 title win and now he only needs to outscore his team-mate Valtteri Bottas by four points at the next round in Austin to seal the title.

Heading into the race, it looked like it was Ferrari’s race to lose. The team’s victory bid was only aided by Max Verstappen receiving a three-place grid penalty for ignoring the yellow flags during qualifying, promoting Charles Leclerc to pole position, ahead of team-mate Sebastian Vettel and Hamilton. But Verstappen’s misfortune didn’t end there – a chaotic start saw both him and Hamilton lose places as they tussled for position, making light contact and then running off the track. Verstappen successfully passed Bottas into the stadium section, only to end up with a punctured tyre. By the time he pitted and re-joined the track, he was running in last place, essentially ending any chances of the Red Bull driver securing his third successive Mexican GP victory.

Out at front, Alexander Albon was closing in on the leading duo of Leclerc and Vettel, when he dived into the pits on lap 15. Ferrari pitted Leclerc a lap later for a new set of medium tyres, thereby committing to a two-stop strategy. Hamilton was the next to pit on lap 24, but Mercedes fitted his car with a pair of hard tyres, which meant Hamilton would have to nurse those tyres for a mammoth 48 laps in order to pull off a one-stop strategy.

Vettel and Bottas, on the other hand, ran longer on their first stint, with Bottas pitting on lap 37 and Vettel following suit a lap later. With Albon and Leclerc yet to take their second pit stops and Hamilton running on significantly older tyres, this seemed to put Vettel in a good position to fight for the win. Elsewhere, Leclerc suffered a slow second pit stop on lap 44 as the Ferrari mechanics struggled to put on his right-rear tyre.

With just 10 laps to go, it was Hamilton in the lead, three seconds ahead of the tightly bunched up pack of Vettel, Bottas and Leclerc. But the promises of an intense showdown in the closing stages of the race never materialised as Vettel was unable to close the gap to Hamilton and instead focused on defending 2nd place. Leclerc’s charge also faded as he locked his front-left tyre into Turn 4 and ran wide.

As a result, Hamilton was able to manage his tyres for an impressive long stint to cross the chequered flag in first place, ahead of Vettel, Bottas, Leclerc and Albon. Verstappen, meanwhile, recovered rom his early-race woes to finish 6th. Behind him, Sergio Perez successfully fended off Daniel Ricciardo to finish 7th in front of a packed home crowd.

The last lap did see some drama as Daniil Kvyat collided with Nico Hulkenberg, forcing the latter into the barriers. Despite crossing the line in 9th place, Kvyat was handed a 10-second penalty for the incident and dropped to 11th in the final classification as a result. This promoted Gasly and Hulkenberg to 9th and 10th places respectively.