Grosjean used Pirelli's super-soft tyres to put the E23 top of the pile for the third time in four days in Spain. 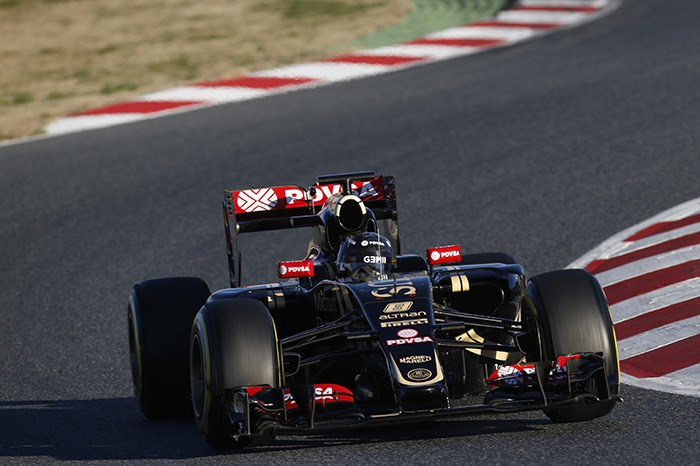 Grosjean, taking over from team-mate Pastor Maldonado, used Pirelli's super-soft tyres to put the E23 top of the pile for the third time in four days in Spain.

But his best, a 1m24.067s, was only a quarter of a second faster than Rosberg managed despite the German being on tyres that Pirelli estimates are as much as two seconds a lap slower.

The Mercedes driver started the day by spinning into the gravel but he shot up the leaderboard in the final hour, as yet again the team's new W06 ran without using either of Pirelli's two softest options.

That could not be said for Red Bull's Daniil Kvyat, who was 0.6s slower than Rosberg using soft tyres.

The Russian briefly set the pace before being toppled by Grosjean's super-soft run.

Beyond the headline times, there were more troubles for McLaren-Honda.

Fernando Alonso endured a difficult morning with minimal running, and when he did appear and started pushing he crashed at Turn 3 just before lunch and had to be airlifted to hospital.

Though a CT scan revealed the Spaniard was unharmed in the crash, the team was not able to continue running despite Jenson Button being due to take over in the afternoon.

McLaren's dramas mean the team leaves Barcelona having completed just 124 laps across the four days, a tally surpassed on Sunday alone by two Mercedes-powered teams - the factory outfit (129) and Williams (127).

Alonso's countryman Carlos Sainz Jr topped the morning session but he also crashed at Turn 3 after the lunch break, bringing out the red flags. The Toro Rosso driver did not continue.

Felipe Nasr, who was fourth fastest on the super-soft tyre, caused the final red flag when he stopped at Turn 8 with 10 minutes remaining.