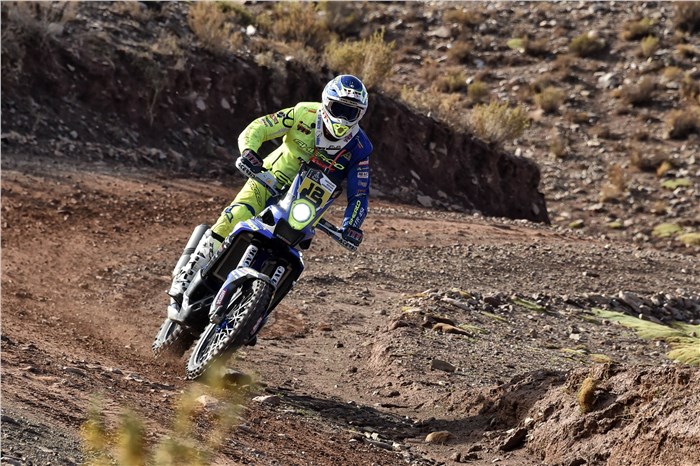 Stage 4 of the 2017 Dakar Rally challenged the competitors with varying landscapes, altitudes and demanding navigation in the first part. The route saw competitors traversing from San Salvador de Jujuy to Tupiza in Bolivia – a total distance of 780km, including a 364-km special. Many favourites dropped out of contention as the Dakar started to show its might. Day 2 Moto category leader, Toby Price, violently crashed out of the race, resulting in a broken femur. The Car category also saw several shuffles up and down the order after Toyota’s challenge ended the previous day. It is now an intra-team battle for Peugeot, with Mikko Hirvonen in the Mini also in the mix.

For the Indian contingent at the 2017 Dakar, it was a mixed day. TVS-Sherco’s Aravind KP, who had dropped out of the competition after a crash on Stage 3, made it back to the bivouac. He luckily escaped serious injury and got away with a small shoulder dislocation. He isn’t thinking about flying home though and has opted instead to stay with the team and experience the Dakar from the sidelines and take in whatever experience he can for his next attempt.

TVS-Sherco’s lead rider Juan Pedrero, who was running 14th overall at the start of the day, suffered a terminal engine failure which left him stranded in the stage. Teammate Adrien Metge had to tow him back to the bivouac and resultantly lost positions himself as well. Pedrero has been handed a 15-minute engine change penalty as well. He eventually finished the stage at 66th place while Metge finished at 44th.

Pedrero, who was looking good for a top 15 finish early on, has now slipped down to 31st position overall as a result. However, there is still a long way to go and the talented Spaniard will be back in the saddle tomorrow and is certain to be pushing to claw back lost time.

Despite having to tow his teammate, Metge continued to move up in the overall standings, classifying 55th overall at the end of the stage. The Frenchman has been consistent, after early bike issues had pushed him to the back of the pack, and looks to be in a good position to continue his climb up the order.

In the Hero MotoSports camp, Joaquim Rodrigues continued his strong charge, crossing the flying finish in 24th place and moving up to a very credible 18th overall at the end of the day. Indian stalwart CS Santosh also seemed pleased with the day’s work as he recovered from a massive one-hour penalty handed to him yesterday after he missed a waypoint. He finished the stage in a strong 67th place and moved up to 79th overall – gaining 25 places from his 104th place start in the morning.

Stage 5 scheduled for tomorrow will take the competitors from Tupiza to Oruro, on a run of 692km, with a timed section of 447km.