The first stage which consisted of only 175 kilometres on Sunday, served merely as a warm-up for the competitors. 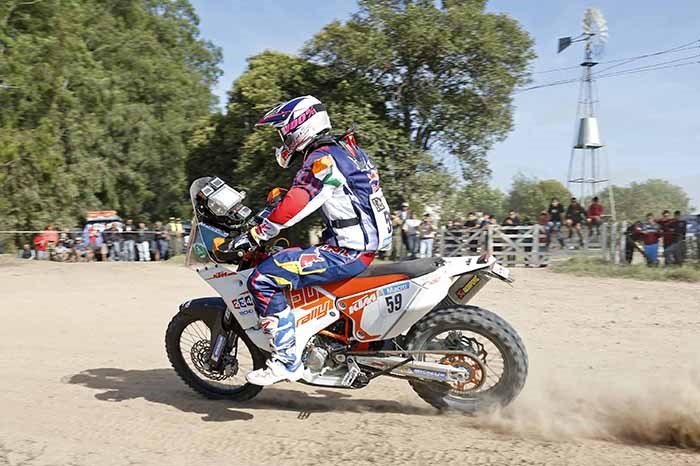 Indian rider CS Santosh managed to fight against odds and stage a strong comeback on day two of the 2015 Dakar Rally, gaining 35 spots after the opening day to finish 50th.

The first stage which consisted of only 175 kilometres on Sunday, served merely as a warm-up for the competitors who had to deal with a total distance of 1463 kilometres on the second day, with the 518 kilometre long stage – the longest of the event.

"I was flowing really well for the first 400 kms. Then I hit fesh-fesh (very fine, powdery sand) and had a bad fall. In fact, I fell about ten times in those 30-odd kilometres. After that, we hit some dunes which were undulating highs and lows. By then my rhythm was gone and I struggled to the finish," commented Santosh.

The fall saw Santosh hurt his left shoulder and thigh but he said it wasn't "that bad" and that he was still able to ride.

Day one leader Sam Sunderland experienced disillusion by getting lost for over 70 kilometres from the finish, which cost him nearly two hours with his hopes of a Dakar triumph all but evaporated.

After finishing in the top five on the opening day, TVS-Sherco rider Alain Duclos slipped outside the top 10 at the end of day two, ending up 12th while his teammate Fabien Planet was 25th.

Penalised by two minutes for speeding yesterday evening, Nasser Al-Attiyah was determined to show that he was by far and away the fastest on the tracks today during a special stage which produced significant gaps at the finish.

As on the first stage, the Qatari was battling against his team-mate Orlando Terranova and won thanks to a crash by the Argentinean in the last ten kilometres, which saw him lose twenty-odd minutes. More importantly, Nasser opened up a lead of more than eight minutes over his nearest rival in the general standings, Giniel de Villiers. A second Toyota Hilux squeezed into the day's top 3 with the fine performance of Dutchman Bernhard Ten Brinke, who is participating in his third Dakar and now occupies an unexpected provisional third place.