Jorge Lorenzo was at his dominating best in front of the Spanish fans in Catalunya. 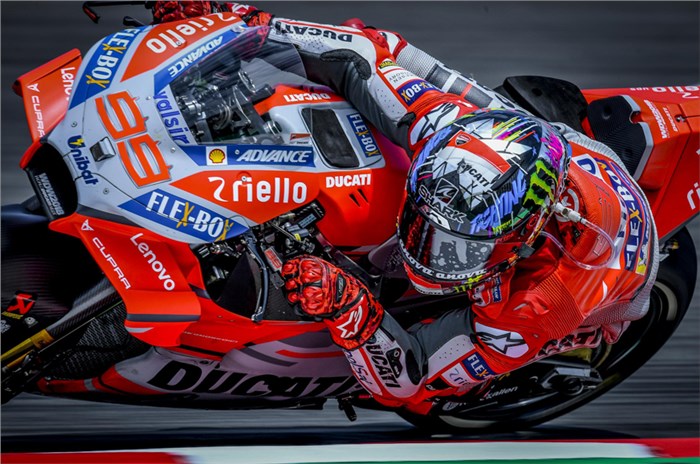 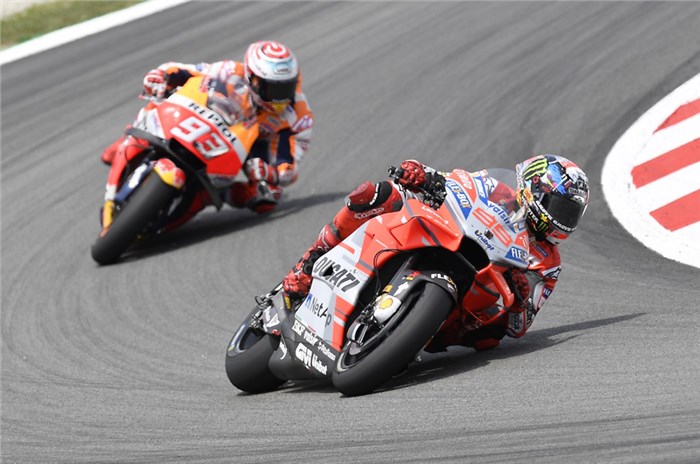 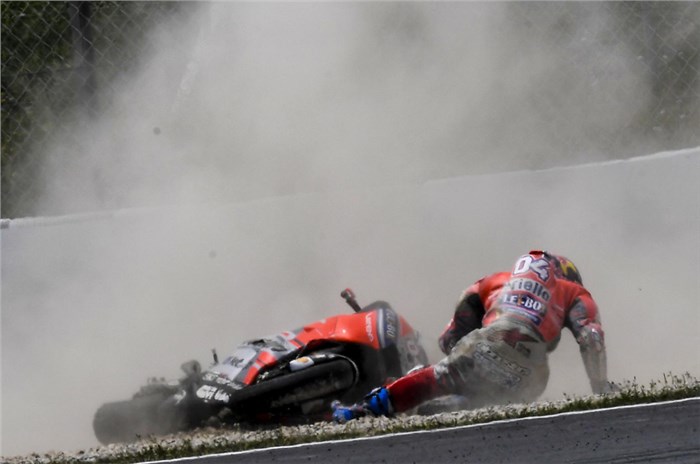 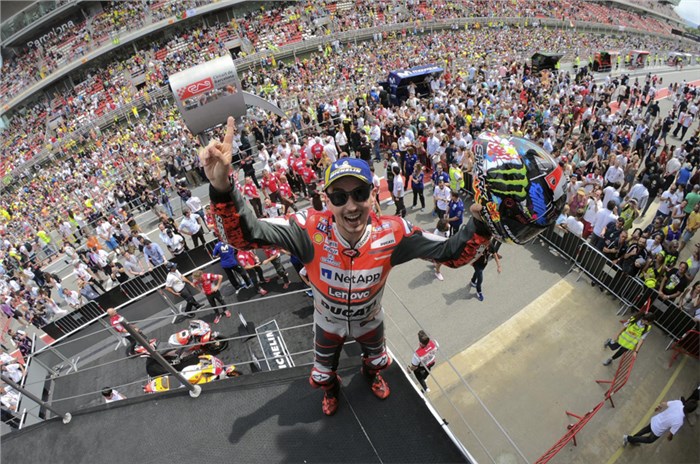 Jorge Lorenzo was the most consistent rider throughout the race weekend and, as expected, won the Catalan MotoGP without even breaking a sweat. Heading in to his home Grand Prix, Lorenzo’s confidence was sky-high as he had registered his first win on a Ducati in Mugello just two weeks back. The positive energy from his win in Italy was clearly evident at Catalunya, both in his body language and pace on the race bike. It seemed that he would easily clinch pole position, but Marc Marquez had some other plans and in the end it was Lorenzo on pole by just a whisker. Lorenzo couldn’t maximise on his debut pole start for Ducati as he was overtaken by Marquez entering the first corner of the race. Later, he was passed by a hard charging Andrea Iannone, who looked set to grab the race lead from Marquez, but, ran wide off the track and dropped back to third place. Further down the grid, Valentino Rossi made amends for his dismal qualifying performance, and, was up in fifth position behind Andrea Dovizioso.

At the end of lap 1, it was Marquez leading the race, but Lorenzo wasn’t too far back and was inching closer to the Repsol Honda rider with every passing corner. As both the riders entered Turn 1 in lap 2, it was the last occasion that Marquez was ahead of his fellow countryman. Utilising the better top speed of his Ducati, Lorenzo was able to pass Marquez, in a clean overtaking manoeuvre, which proved to be the turning point of the race. With a clear track in front of him, Lorenzo put the hammer down and was slowly edging away from Marquez. The reigning champion wasn’t letting Lorenzo break-free so easily and both the Spanish riders were exchanging fastest laps of the race. Andrea Dovizioso was part of the leading pack of riders, but once both the Spanish riders picked up the pace, he was in a lonely third position ahead of Rossi. Grid positions remained unchanged until lap 8 of the race, when Dovizioso lost the front of his Ducati on Turn 5 and crashed out of the race, promoting Rossi to third place. Luckily for Dovizioso, he walked away unhurt from the shunt, but the crash will certainly upset his championship aspirations as this was his third DNF of the season.

With Dovizioso out of the race, Marquez dropped his pace and looked content with second place and collecting 20 crucial points in the championship. With the top three positions decided, attention shifted to the battle for fourth place between Dani Pedrosa, Cal Crutchlow and Danilo Petrucci. The trio provided some great racing action as each rider tried his best to win the scuffle. It was British rider, Crutchlow, who was able to win this battle in the closing stages of the race. As for Jorge Lorenzo, he cruised his way past the chequered flag, to add yet another dominating win in his repertoire. Second position means that Marquez now extends his lead on Rossi in the championship standings by 27 points. As for Rossi, he was lucky to claim his 14th podium finish in Catalunya due to Dovizioso’s crash. The Italian rider should be happy with his performance, as he was the top Yamaha rider by a far margin. His team-mate Maverick Vinales finished sixth and was followed by Johann Zarco.

The next round of MotoGP will be held at the ‘Cathedral of Speed’ in Assen, a track which has been always been traditionally favourable to Yamahas. The Japanese outfit is set to test some new components on Monday at Catalunya and will be hoping that the new parts are able to solve their problems prior to the Dutch GP.