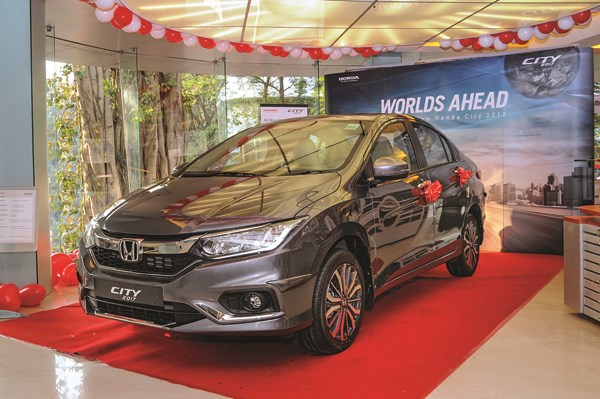 Honda launched the updated City a few months ago at a starting price of Rs 8.49 lakh for the base petrol variant.

The top-spec City ZX’s steep pricing (Rs 13.57 lakh for the diesel) has not been a deterrent to demand. This City ZX commands the highest waiting period of close to three months at most dealerships. The talking point of the 2017 City range is the new top-spec ZX trim which gets a full-LED package that includes automatic LED headlamps, fog lamps, daytime running lamps and LED inserts for the tail-lamps. It also gets rain-sensing wipers, a boot lid spoiler and larger wheels. This is the only variant in the line-up to get six airbags; the other trims come with two.

Surprisingly, the mid-spec City VX – which also gets kit such as LED headlamps, electric sunroof and 16-inch alloy wheels – has almost no waiting period and is available for ready delivery. Lower variants of the car have a waiting period of around three weeks or less depending on dealer inventory.

The refreshed City gets the option of a 1.5-litre petrol or a 1.5-litre diesel engine. Gearbox options include a five-speed manual or CVT for the petrol, and only a manual for the City diesel. Honda claims that the petrol engine delivers 17.4kpl when paired with the manual gearbox and 18kpl with the CVT gearbox. The diesel City, on the other hand, is said to return 25.6kpl.

The facelifted Honda City rivals the likes of the Maruti Ciaz which is now sold via Nexa dealerships, the updated Vento Highline Plus and the Skoda Rapid. Hyundai is also readying the next-gen Verna for an India launch later this year.