City continues to be the bestseller for Honda 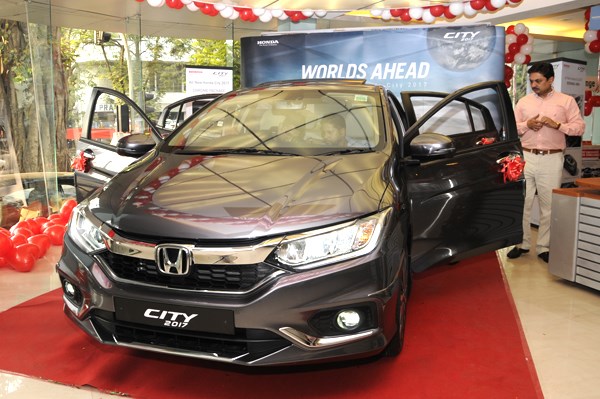 Bookings for the recently-updated City sedan have crossed 25,000 units in India.

The popular Honda City has been a bread-and-butter model for Honda ever since its launch in India and the facelift introduced earlier this year continues to be well accepted. According to the carmaker, the City facelift has received over 25,000 bookings since its launch.

The City facelift, which was launched at a starting price of Rs 8.49 lakh for the base petrol variant, was a volume driver for Honda in April, registering sales of 5,948 units. Honda Cars India reported domestic sales of 14,480 units in April, up 38.1 percent.

However, it remains to be seen if Honda's sedan can once again rise to the top of the bestselling mid-size sedan charts. With its growing popularity, the Maruti Ciaz unseated the Honda City last fiscal to become the country’s highest-selling mid-size sedan, registering sales of 64,448 units during the year, as against the City's 57,984 units.

The 2017 City is equpped with a host of features such as electric sunroof, 7.0-inch touchscreen infotainment system, automatic LED headlamps, fog lamps, daytime running lamps and LED inserts for the tail-lamps, according to trim levels. The top-spec City ZX gets rain-sensing wipers, a boot lid spoiler and larger wheels. This is also the only variant in the line-up to get six airbags; the other trims come with two.

The refreshed City offers the option of a 1.5-litre petrol or a 1.5-litre diesel engine. Gearbox options include a five-speed manual or CVT for the petrol, and only a manual for the City diesel. Honda claims that the petrol engine delivers 17.4kpl when paired with the manual gearbox and 18kpl with the CVT gearbox. The diesel City, on the other hand, is said to return 25.6kpl.