In conversation with Amitesh Kumar, Joint Commissioner of Police (Traffic)

Talking about traffic safety, the technology involved to implement CCTVs and the e-challan system and more. 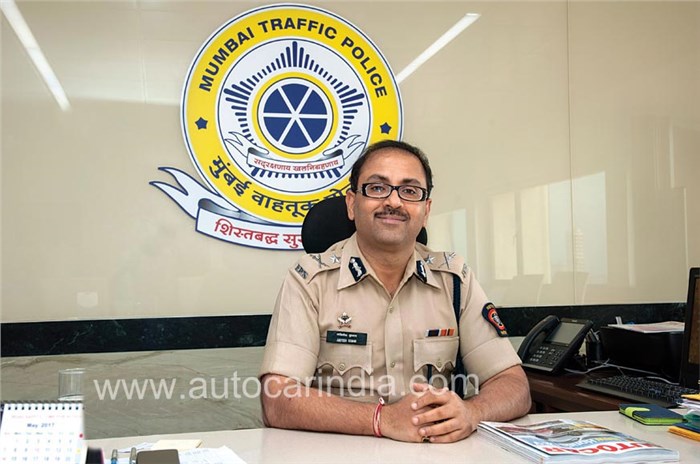 What prompted the widespread installation of CCTVs in Mumbai?
We realised the need for CCTVs after the 26/11 terror attacks in Mumbai and had proposed the project at that time, but the implementation was delayed. As of now, we have over 5,000 CCTV cameras in place through a very highly efficient system. The main monitoring centre is at Crawford market and the secondary one is the Traffic Control Room in Worli. The camera network has helped in the detection and prevention of crime, handling of law and order, and bundobust (arrangement) during various events.

What has been the impact of the CCTV challan system? How many e-challans have been issued until now and what is the compliance rate?
The system has been operational since January 2017 and we have generated more than 20 lakh challans so far. It is very effective since it expands our reach with lesser manpower, and we can pick any location and generate challans against traffic violators easily. However, there are some teething problems, such as lack of database connecting the motor vehicle to a mobile number. As a result, on many occasions, although a challan is generated, it does not reach the motorist because we don’t have a full database linking the mobile number to the vehicle. Moreover, since the payment of the fine is cashless and voluntary, there were instances of non-compliance. Hence, we organised naka bandis (checkpoints) to catch violators.

What are the behavioural changes you’ve noticed after the implementation of the system?
The e-challan system adopts a cashless mode of fine payment. In doing so, the system has become more transparent. Motorists get fewer chances to complain about the non-transparent behaviour by traffic cops. Although it is too early to say, adherence to traffic rules has increased and as people are seen talking about the CCTV cameras.

How do you plan to expand the use of technology to nab errant motorists?
We are thinking of deploying more speed cameras and the Automatic Number Plate Recognition (ANPR) system. We are also examining best practices globally and studying the measures that can be incorporated into our system.

How do the cameras aid in times of crisis, such as the deluge in Mumbai in August 2017?
The CCTV network was hugely useful during the deluge as we were able to have a comprehensive look at the city through the cameras. It enabled us to see an overall picture and suggest diversions, road closures and accordingly deploy traffic personnel at the desired locations. It also helped us in giving updates such as which routes to avoid to the public, through the radio, Twitter, and our helpline.