As a torrent of over 5,500 CCTVs keep a close eye on the Maximum City, we visit the Mumbai Traffic Police war room to see the action unfold. 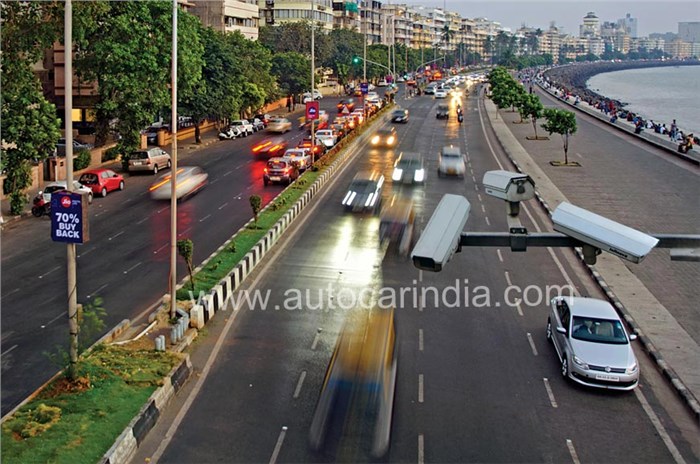 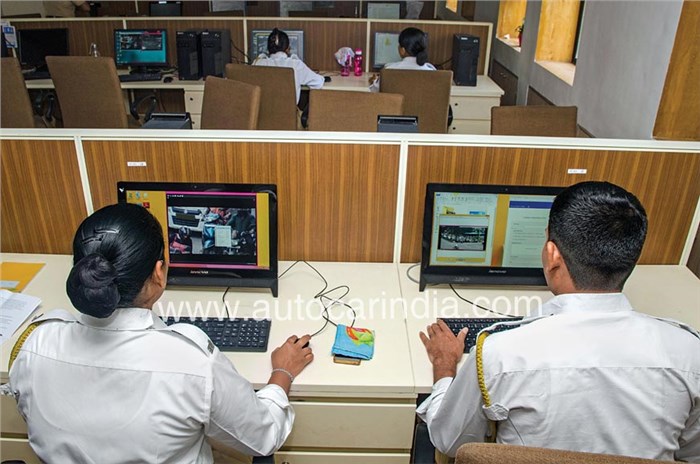 Officers from the Electronic Enforcement Cell capture the traffic offence live and generate an e-challan against the violator. 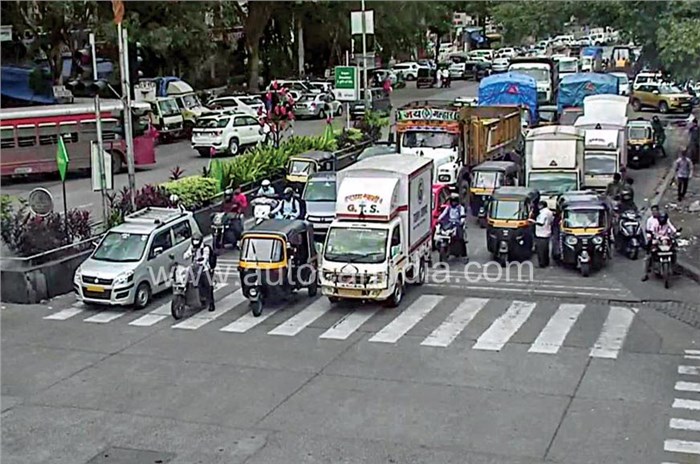 How an e-challan is generated 1: A larger image captures the junction where the traffic violation has occurred. 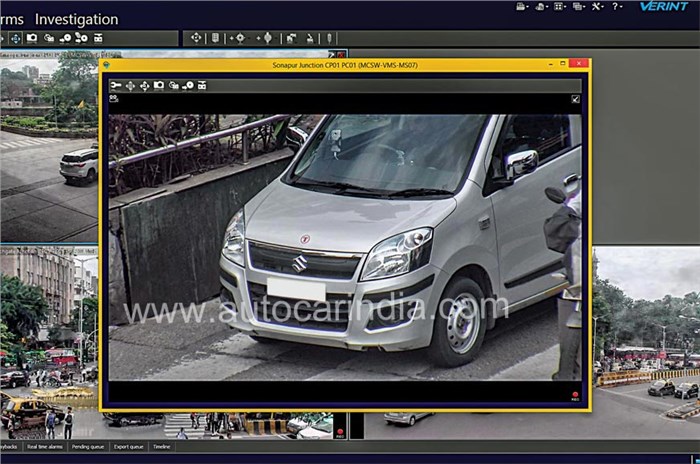 How an e-challan is generated 2: A zoomed-in image captures the offence and vehicle’s registration number.

Last November, on a searing Monday morning, I hailed one of Mumbai’s ubiquitous black-and-yellow cab for my commute to work. What transpired in the next few minutes turned the dreary start to my week into a rather thought-provoking one.

Caught in dense traffic, the cab trudged towards the end of the congestion, before the driver brought it to an abrupt halt a few feet ahead of the signal post as the light turned red. I asked him what happened, to which he pointed to a pale zebra crossing ahead and a CCTV camera perched atop a pole next to the signal and said, “Saab, aagey jaunga toh camera pakad lega aur fine lag jayega (If I move ahead, I’ll be caught on camera and will be fined).”

I’ve lived my entire life in Mumbai but could not recollect the last time, or in fact, any instance when a motorist was as apprehensive of breaking the rules in the absence of a traffic police officer.

Although the city continues to grapple with issues such as lack of adequate parking spaces, road conditions, and frequent road accidents, there is a change for the better and its coming thanks to the Mumbai Traffic Police’s reliance on technology to nab violators.

The cab driver was referring to a system adopted by the Mumbai Traffic Police in October 2016, through which it can monitor the movement of traffic via a network of CCTVs across the city. The network comprises over 5,500 cameras that are exclusive to the traffic police, but they are also shared with other administrative bodies in the city.

So how do they monitor the feed from the thousands of cameras spread across the second-most crowded city in the world, and one that has a vehicle population of over 30 lakh and a staggering road length of 2,000km? The best way to get an inside view was through the Mumbai Traffic Police Control Room, and that’s where we headed after getting due clearance. (Sorry, no photos!)

Located at the traffic police headquarters in Worli, the control room is a nerve centre for the city’s traffic department. Sharing its look with a television broadcast studio, the control room primarily has two functions – surveillance and enforcement. 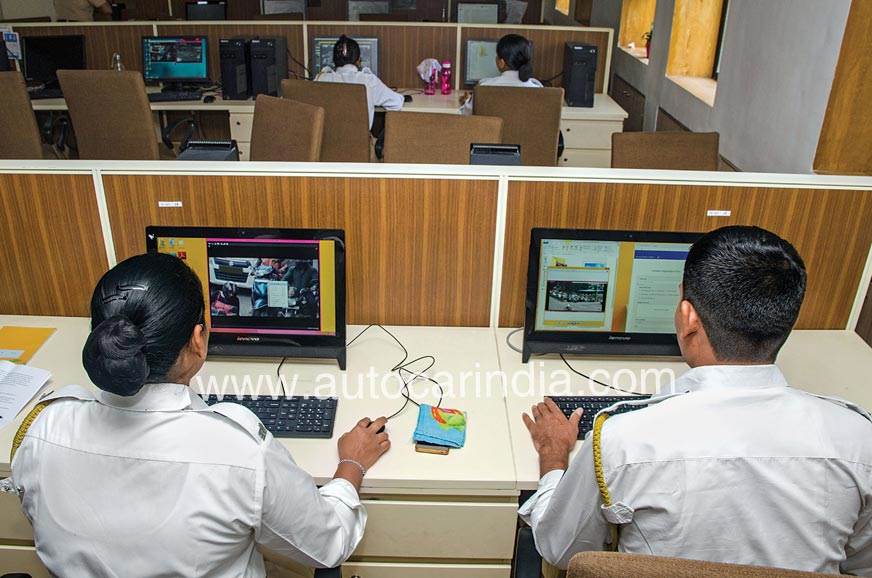 Officers from the Electronic Enforcement Cell capture the traffic offence live and generate an e-challan against the violator.

Surveillance, as the name suggests, involves monitoring the flow of traffic. Police officers stationed behind triple-screen computers watch the traffic with hawk-eyed scrutiny and are on the lookout for any bottlenecks in vehicle movement. For instance, in the event of a vehicle breakdown or a severe congestion, they coordinate with the nearest police station and deploy personnel or a towing van to ease the situation. The control room can also remotely alter the duration of a traffic light at a signal, if the situation demands, and even double as a war room for quick response and coordination in the event of an emergency.

Interestingly, the cameras also help the police in studying motorists’ behaviour and tweak the rules wherever required. For instance, the maximum speed limit on the Bandra-Worli Sea Link was increased to 80kph from 50kph after it was found that virtually everyone was over the limit.

The enforcement function, on the other hand, aims to nab motorists breaking the law, and this is where the city police intend to make huge strides towards not only improving law-abidance but also curb corruption. Think you can get away with riding without a helmet, driving without a seatbelt, talking on a mobile phone while driving or halting ahead of the zebra crossing? You might want to reconsider as the traffic police department has placed a huge emphasis on the gathering of evidence so as to eliminate the possibility of a denial by the errant motorist.

Violators are fined via an e-challan sent to their cellphones after they are caught breaking a rule on a CCTV camera. We were amazed at the ease with which this is carried out. In a process that takes under a minute, a police officer from the Electronic Enforcement Cell, sitting in the control room, zooms in on the errant motorist’s vehicle via a hi-res CCTV and captures the number plate along with an image of the junction. The officer then feeds the vehicle registration number and the offense in the system and a challan, along with both images (zoomed in and large) as evidence, is sent to the vehicle owner via SMS immediately. This is made possible through a central database electronically linked to the Regional Transport Office which links the car to its owner’s number.

Such has been the impact of the CCTV challan system that, overall, more than 22,00,000 challans have been issued in the past year. Compliance, however, is an issue since fines against just 50 percent of the challans have been paid for by motorists. This has translated into a significant hit on revenues: only Rs 29 crore in fines has been collected out of a total accrual of around Rs 55 crore. The department is now looking at other measures, including physically tracking down those with multiple challans and summoning them to pay the fine. In fact, if a motorist fails to pay the fine they may face problems during naka bandi (checkpoints).

Meanwhile, speed detection cameras were installed at 47 key locations across the city in January last year where over-speeding was rampant. They include areas like the Eastern Freeway, the Bandra-Worli Sea Link and Marine Drive. 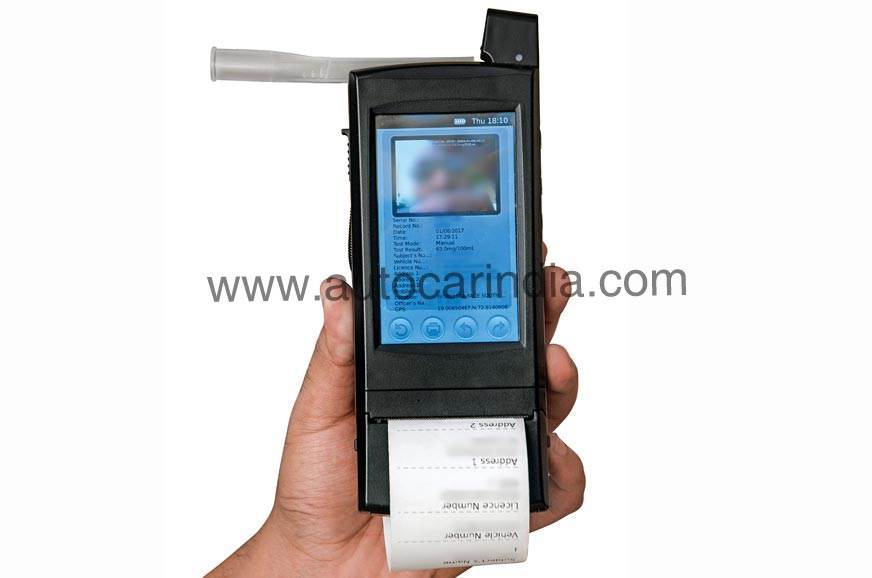 Apart from hi-tech cameras, technology is finding its way into other aspects of the traffic police’s functions as well. In the same month, the Mumbai Traffic Police launched a mobile application called MTPapp which enables motorists to pay fines online, identify parking spaces, see traffic diversions and trace towed vehicles. More importantly, citizens can also assist the police by clicking a picture of a traffic violation and reporting the incident using the app.

Also new is a GPS-enabled breathalyser – a device that captures the image of the motorist blowing into the pipe and generates a report complete with the result of the test coupled with the location of the driver and his vehicle details. Details are then sent to the server at the traffic police headquarters for record-keeping. The police department has issued over 210 such devices in its taskforce, following the implementation of the move in May 2017, and registered over 9,200 cases in the second half of 2017.

Coming to the e-challan system, it is a cashless way of generating receipts and collecting fines, which the department says is aimed at introducing more transparency into the process. The traffic personnel is equipped with a handheld wireless device, instead of a receipt book, which is capable of generating challans with GPS location and photographic evidence. Traffic violators can choose to pay fines via their debit or credit card, as well as net banking. The devices were put into force in October 2016 and, as of now, over 1,200 such units are in use. Breaking the law is easy. Paying up has become a bit easier too.

In due time, more tech will find its way to the police force. Body-mounted cameras that are used to record encounters and gather evidence will become commonplace in the years to come, as so will Automatic Number Plate Registration cameras and Red Light Violation Detection cameras that the department plans to deploy on a large scale soon. And thanks to this web of tech, staffers at the Autocar India office have been summoned by the police for seemingly small offenses. So we can vouch for the efficacy of the system.

There’s a lesson here. If you think that the traffic violation you’re about to commit will go unnoticed, remember, the long zoom lens of the law is bound to catch you!

In conversation with Amitesh Kumar, Joint Commissioner of Police (Traffic)