White still most preferred car colour in India in 2018

While white is preferred by a whopping 54 percent of people, grey and silver lock in the second spot at 15 percent each. 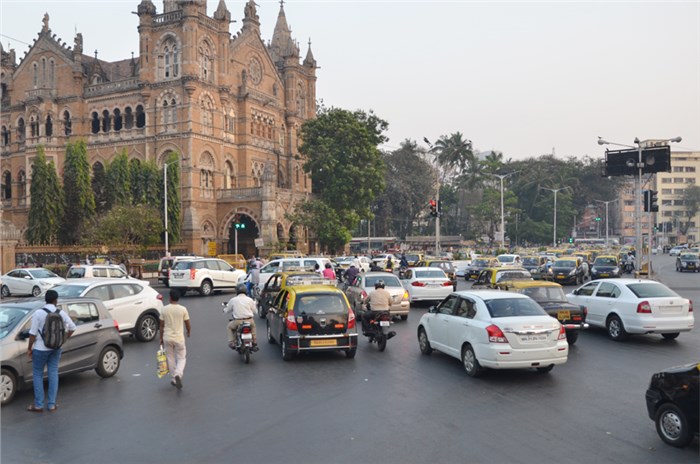 White triumphs again. As per the latest ‘BASF Colour Report for Automotive OEM Coatings’, white as a car colour has triumphed over all other colours – in India and global, alike – in CY2018.

At the end of every year, the Coatings division of BASF provides a global analysis of the distribution of preferred colours in the year's automotive market. This year, achromatic colours – white, black, grey and silver – still dominate Indian roads and cover almost 80 percent of cars produced worldwide. Of these, white clearly stands out as the most popular colour. More than every fourth car in North America and nearly every third vehicle in Europe sports white. In the Asia-Pacific this is true for more than every second car. And in India, 43 per cent of car buyers chose this colour tone in 2018.

The global popularity of silver has slightly decreased, when compared to the previous colour report. From amongst the diverse shades available, blue is the most popular, followed by red. These chromatic colours tend to be more popular within smaller vehicle segments while overall request for chromatic hues drops off significantly in larger segments. Here, there was a considerable increase in black and white compared to the previous year. 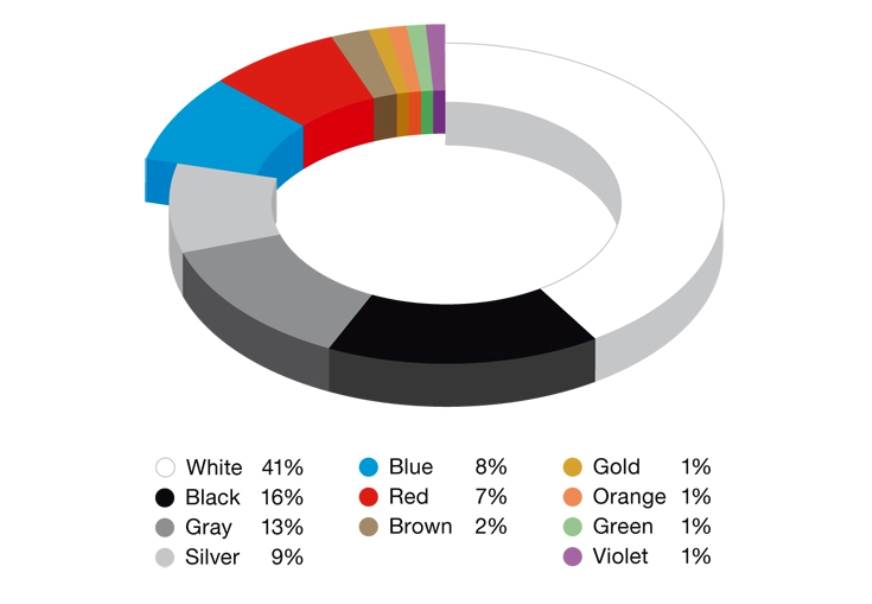 India: white, with a dash of grey and silver

The Indian market saw total sales of 3,394,756 passenger vehicles in CY2018. Keeping with global trends, white is the preferred colour for consumers with 43 percent opting for it in 2018. The other two most popular PV colours in the past year were grey and silver, each finding 15 percent of the market. Red, at 9 percent, was followed by 7 percent of buyers selecting blue, while black rounded up the top five colours list with 3 percent of cars.

“Small cars which are pearl white in colour are popular among Indian consumers. Customers in the warm climate of India may prefer white because white cars do not heat up so quickly,” said BASF Head of Design (Asia-Pacific) Chiharu Matsuhara, in a PTI report. She added, “Another reason might be the luxurious image of this colour, as suggested by our trend observations.”

In the entry-level segment, 42 percent of buyers went with white, 17 per cent with grey and 16 percent with silver. Red was another popular colour in the segment being the choice of 12 percent of the buyers.

The basic compact segment, white took the prize again – with 35 percent of buyers opting for it, followed by grey and silver with 17 percent each, red with 9 percent and blue with 8 percent.

In the premium compact segment also, the BASF colour report said white was the most-popular colour with 46 per cent of consumers going for it, followed by silver at 21 per cent and grey at 17 per cent. Interestingly, only 1 percent preferred the colour black.

However, in the mid-sized segment, black was the second-most popular colour with 18 percent – 38 percent behind the colour white which had 40 percent buyers preferring it. The other popular colours in the segment were blue at 16 percent and silver at 13 percent and brown 5 percent, among others.

Nearly one out of five cars in Europe is gray, replacing black as the second-most popular colour. Buyers can choose from more than 110 variations of grey that range from light grey to dark metallic anthracites.

Blue offers even more options. Approximately 140 shades make blue Europe’s most diverse colour space and the fourth most desired colour in the region. It overtook silver in 2018 with an 11 percent preference among PV users.

A metallic or pearlescent effect significantly contributes to the unique look of a car. In 2018, two-thirds of all European vehicles had an effect coating. According to the report, the larger the car, the more likely it would be painted with an effect. Dark colours such as black and grey are mostly formulated to have a metallic effect, whereby lighter colours are primarily solid shades. “The landscape of automotive coatings effects evolves continuously and is shaped by new and inspiring ideas,” said Mark Gutjahr, head of Automotive Colour Design, Europe at BASF’s Coatings division. 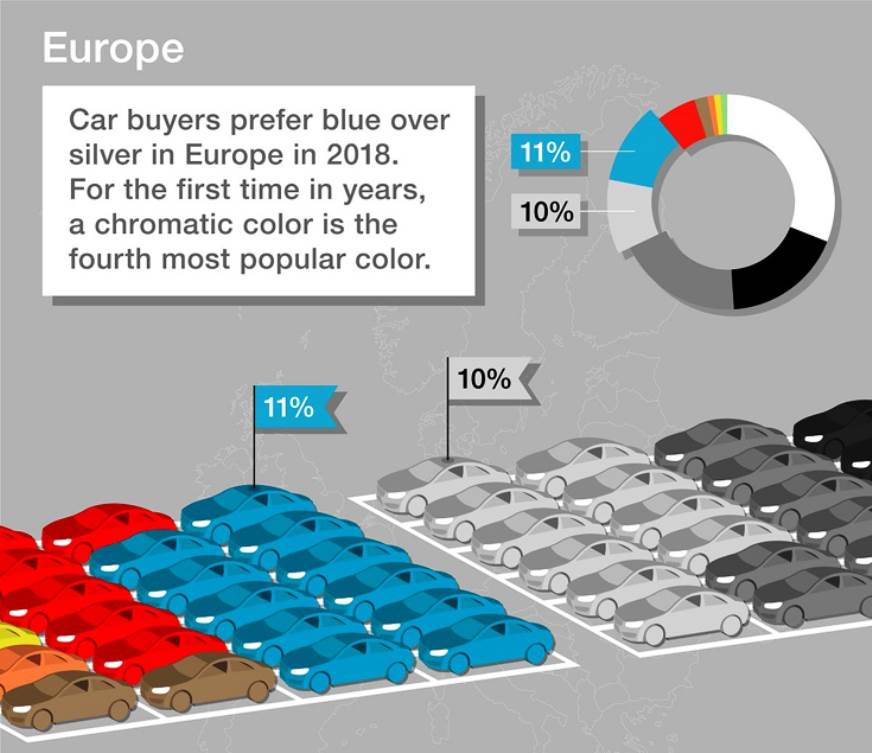 White is most popular in the Asia-Pacific than any other region. Around 53 percent of all new cars are white with a significant increase in its popularity compared to the previous year.

Among chromatic colours, red is still the most popular; but blue does seem to be closing the gap. Interestingly, brown remains especially popular amongst SUVs but seems to be displaying signs of slowing down, which may indicate that its importance in this segment may have passed.

Asia-Pacific consumers appear to connect their colour preferences to their attitudes and lifestyles. For example, metallic and sparkling blacks have risen in demand across several body segments. Even smaller cars, have been seen to favour silvers and greys with dazzling effects.

This can be seen in the Chinese market, where a broader palette of colours has emerged. “The diversity of chromatic colours is evident, with red, blue, yellow, brown and gold hues appearing in almost every segment. Chinese consumers readily display their colouristic tastes more so now than in the past”, said Chiharu Matsuhara, head of Automotive Colour Design, Asia-Pacific. 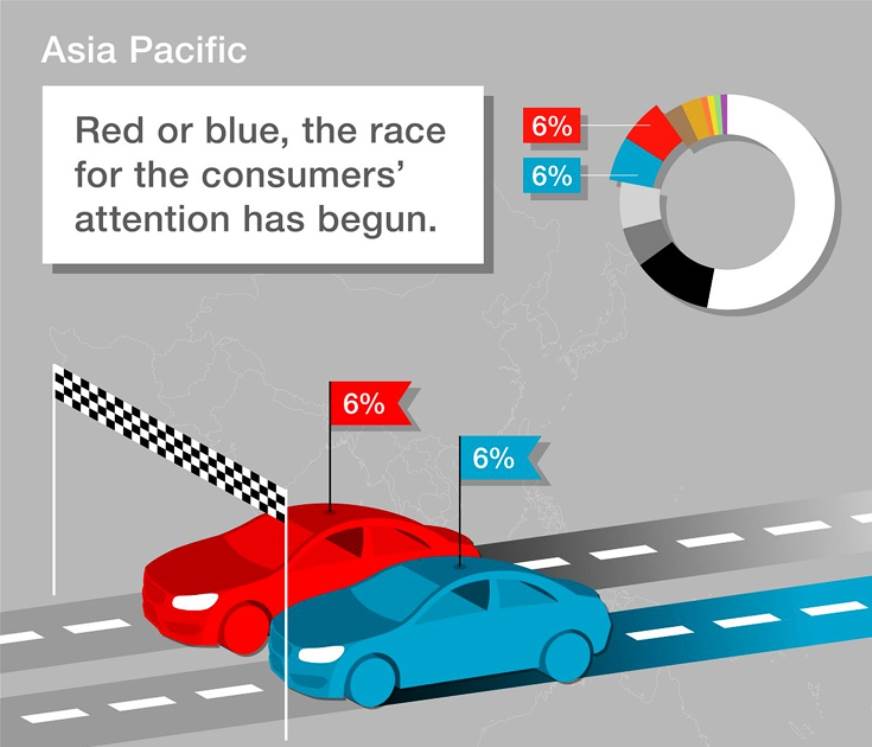 In 2018, achromatics retained their trend of being the most popular automotive colour options for buyers in North America and accounted for about 75 percent of its market. Among the achromatic colours (no surprise) white maintains its lead.

Besides achromatic shades, consumers continue to demonstrate a growing affinity for red, specifically within the pick-up and sports-car segments. The diverse blue colour space was relatively unchanged compared to the prior year.

Over the last decade, Crossover Utility Vehicles (CUVs) have emerged as a dominant vehicle segment in North America; and the most popular colour in this segment, followed by black and gray. Blues and reds are almost equally desired in this region. “In coating large surfaces for the CUV segment, the industry looks to bring a suitable visual expression of the vehicle’s perceived use and link it to the brand image,” said Paul Czornij, head of Automotive Colour Design for BASF North America. 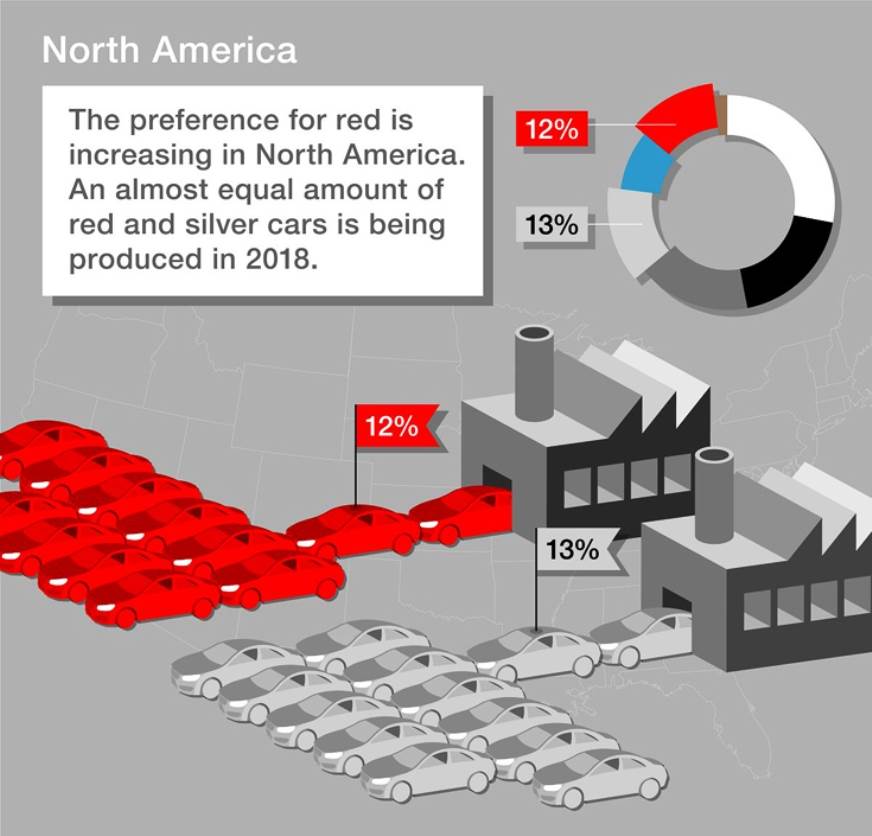 The BASF Coatings division has a vivid understanding of trends in materials and colours. This knowledge is used this to predict which colours will play a key role in the future automotive market.

Every year, the Coatings division’s designers create Automotive Colour Trends – an innovative collection of 65 new colours which are selected based on extensive research and in-depth analyses of both global trends and cultural shifts that may influence automotive colour selections in the global market three to five years later.