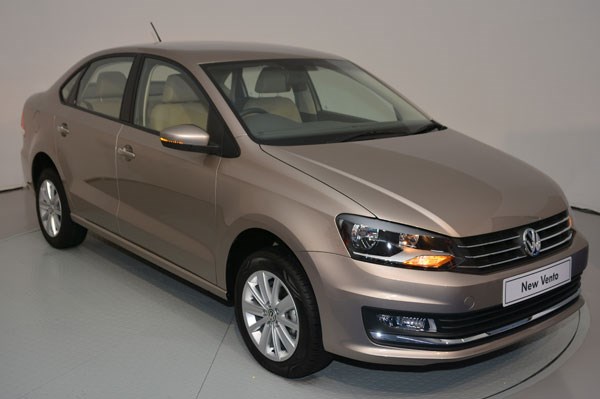 The update for the Vento may have appeared too soon, but this time the changes seem substantial.

Just eight months after its first update, the Volkswagen Vento has once again gone through a host of changes and now comes with new exterior bits. The cosmetic changes on the facelifted Vento include a new bumper, a Passat-like grille and horizontal fog lamps with integrated cornering lights.

The rear gets a modified bumper with a chrome strip that exudes style, and refreshed tail-lights. Apart from that, chrome bits have been added to the door handles, the tail-pipe and the boot as well. Unlike in 2014, when the Vento upgrades just included new head-lamps and 15-inch alloys on the outside, the changes this time around seem to be more comprehensive.

On the inside you get a lighter colour scheme and a bit more equipment. Moreover, top trims of the Vento will now get cruise control, a cooled glovebox, a dead pedal, external boot release and auto-folding mirrors.

Under the hood, the engine running the Vento facelift will remain the same: a 1.2-litre turbo-petrol engine making a 103bhp, a 1.6-litre petrol churning out 104bhp, and a 1.5-litre diesel engine making 103.2bhp. Power will be delivered to the wheels via a five-speed manual gearbox and also a seven-speed dual-clutch automatic gearbox that Volkswagen rolled out as a part of its 2014 update on the Vento.

Competition in the mid-size sedan space has been picking up with the Ciaz, City and facelifted Verna catching the fancy of buyers. But with this second facelift to the Vento in such a short span, Volkswagen has clearly shown keenness to make its presence felt.