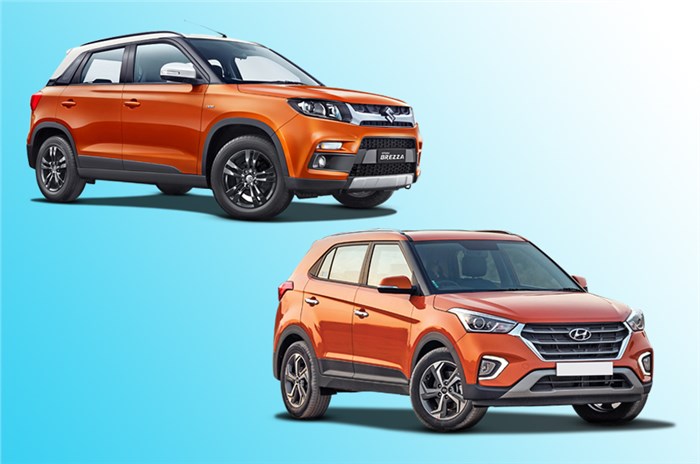 Even as the overall passenger vehicle industry (made up of cars and utility vehicles), feels the pressure of slowing sales, UV sector still looks strong. The Indian PV industry clocked total sales of 2,84,224 units in October 2018 (up by 1.55 percent). Passenger car sales saw flat growth at 1,85,400 units, while UV numbers, at 82,414 units, increased by 4 percent year-on-year. This means that for the month of October, UVs accounted for 28 percent of overall PV sales. In other words, one in four PVs sold in India is a UV, which is in line with global trends.

The monthly UV sales toppers continue to be Maruti Suzuki’s Vitara Brezza and Hyundai’s Creta, both of which are well entrenched in their top two slots. In fact, both SUVs have hit their best-ever monthly sales numbers in October 2018, indicating both carmakers had ensured significant stock was available across showrooms in India during the festive season.

The Vitara Brazza still has the top spot. With 15,832 units sold last month, this marks the compact SUVs’ best monthly sales number since its launch in March 2017. This works out to 510 units per day during October. The model’s previous best monthly sales had occurred in May 2018 (15,629) and July 2017 (15,243). At the beginning of the year, Maruti Suzuki had launched an updated Vitara Brezza that came with design tweaks, more equipment and a 5-speed AMT option.

As per our sister publication Autocar Professonal's estimate, the Vitara Brezza's cumulative sales in the Indian market have crossed the 3,50,000-unit mark. By the end of October, total sales stands at 3,57,534 units over a 32-month period. In the first seven months of FY2019 (April-October 2018), the Brezza has sold a total of 94,869 units, which comprises a robust 63 percent out of the total 1,50,633 UVs Maruti has sold in FY2019 till date.

India's second-most sold UV, Hyundai’s Creta, also has also recorded excellent sales. During October 2018, The Korean brand dispatched a total of 11,702 Cretas to its showrooms across India, marking the best-ever month for the SUV. The previous monthly best for the SUV was in June 2018 when it went home to 11,111 buyers.

The Creta accounts for 98.62 percent of Hyundai's total UV sales of 76,069 units in the April-October 2018 period. The company’s UV market share has been on the rise. The current 13.91 percent share is a significant increase over 12.35 percent in April-October 2017.

In the race to the 3,50,000-unit mark, the Vitara Brezza, despite having launched a year after the Creta, has waltzed ahead of the Hyundai.

Hyundai had had updated the Creta earlier this year, adding external stylistic changes and more kit such as a sunroof an electronically adjustable driver’s seat and wireless smartphone charging pad.

In third place on the UV best-seller chart is the stolid warhorse, the Mahindra Bolero. The Bolero sold a total of 7,222 units last month, which is a respectable total though a bit less than the 8,395 units sold last October. With rural incomes improving, expect the Bolero to report better sales numbers in the months to come, only if only diesel prices keep going down though. M&M currently has a UV market share of 24.51 percent, down from the 26.28 percent it had in April-October 2017.

The Toyota Innova Crysta maintains its No. 4 position from a year ago, with sales of 6,700 units and cumulative sales of 46,047 units in the April-October 2018 period. It accounts for 77 percent of the total 59,115 UVs that Toyota has sold in the first seven months of FY2019.

The recently launched Mahindra Marazzo, though not a direct competitor, has potential to upstage the Innova thanks to its comparable wheelbase, cabin space, as well as comfort features on offer, all at a substantially lower price point. The Marazzo sold 2,829 units in September, 3,801 units in October and has August-October 2018 sales of 8,401 units. Still early days yet for the latest MPV in town.

Led primarily by the Nexon, Tata Motors cumulatively saw overall UV volumes clock 43,447 units in the April-October 2018, up 120 percent (April-October 2017: 19,737) and helping the company to more than double its UV market share to 7.95 percent, which was 3.80 percent a year ago. The Nexon contributed almost 80 percent to Tata’s overall UV volumes in the seven-month period, with the Hexa and the Safari Storme aiding its cause.

With 2018 drawing to a close, SUV aficionados will be waiting for a new crop of models to break through in 2019. They won't be disappointed because there will be an influx of SUVs, ranging from the compact to the luxury segments. Watch this space as we keep you updated on the battleground that is the SUV market.