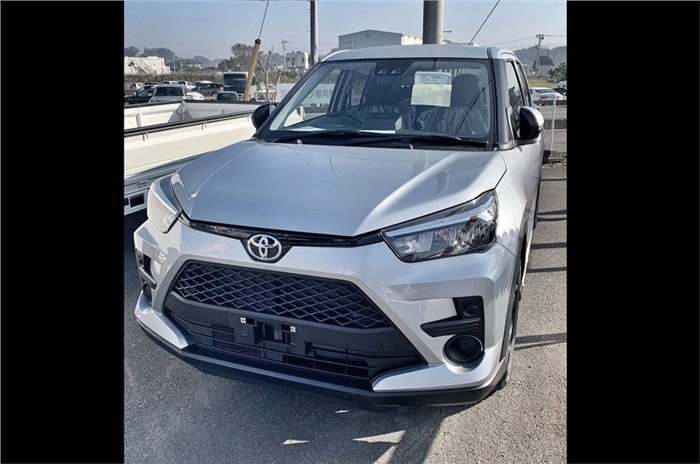 We are still a few days away from the world premiere of the Toyota Raize compact SUV. However, some new details have surfaced online and revealed a long list of safety tech and features that the model will come loaded with.

First up, as reported by us long ago, the Toyota Raize compact SUV does stick to its under-four-metre dimensions. We can confirm that the model in its production-spec form is 3,995mm long, 1,695mm wide and 1,620mm high – which are the exact dimensions of its badge-engineered twin, the Daihatsu Rocky SUV, even though both models get a unique front- and rear-bumper design. The SUV features a 369-litre boot that has a unique twin-floor feature; providing a hidden storage compartment under the floor as well.

As far as safety features go, there is a long list of them. Toyota will equip the Raize with safety tech like blind-spot monitoring, cornering lamps, a smart parking system, LED headlamps with an adaptive driving beam, a pedestrian detection system and adaptive cruise control, to name a few. This is addition to dual front airbags and curtain airbags that are expected to be standard across all variants.

There will be at least five variants on offer, each getting an additional 4WD option. As many as eight exterior paint choices will be available, along with more than three dual tone options. Toyota will initially launch the Raize SUV in Japan, however the model will see market introductions in other countries too. Toyota will equip higher variants of the Raize SUV with a full-digital cockpit-like instrument cluster, an 8.0-inch infotainment system with reverse-camera display, 17-inch alloy wheels, and roof rails. As reported before, it will also get LED headlamps and tail-lamps.

The Raize gets a Toyota SUVesque nose with a large trapezoidal grille and mesh inserts that makes it look more like a mini-RAV4 SUV. It gets angular housings for the fog lamps and LED daytime running lamps. The Toyota logo placed is above the grille. The SUV shares its headlamp design with the Rocky; and in the pictures, it looks like the models could get LED headlamps, at least on the higher trims.

Toyota will offer a range of accessories for the Raize that will include different body kits and alloy wheel designs including a TRD package with a sportier styling. The Raize also gets a floating D-pillar and a tall bumper with thick cladding lower down; and unique contrast-black inserts that mimic the styling of the front bumper.

On the inside, the SUV's dashboard gets faux brushed-aluminium bits on the AC vents and steering wheel. It also gets a driver-centric cockpit-like centre console, along with a free-standing infotainment screen that seems to be an 8.0-inch unit. The model is also to sport the same three-spoke steering wheel as its Daihatsu cousin.

Both SUVs are based on Toyota’s flexible DNGA platform that is aimed at emerging markets. This platform is essentially a low-cost version of the advanced TNGA modular architecture. Under the hood, the new Raize gets a 1.0-litre, three-cylinder, 12-valve turbo-petrol engine that’s good for 98hp at 6,000rpm and 140.2Nm of torque at 2,400-4,000rpm. Gearbox choices would initially include a CVT and a 6-speed manual to be added later. As far as fuel economy goes, the Raize will deliver 18.6kpl for the 2WD variant; meanwhile, the 4WD model will churn out a lower 17.4kpl. Keep in mind that these figures are based on the WLTC driving cycle, which differs from the ARAI specifications used here in India.

There is no news of the Toyota Raize compact SUV making it to our shores. Looking at the dimensions and engine information, however, it could make a strong contender for Toyota in the ever-growing Indian compact SUV segment.