The April issue also has comparisons of the Skoda Slavia and Honda City, and the Yezdi Scrambler and RE Scram. 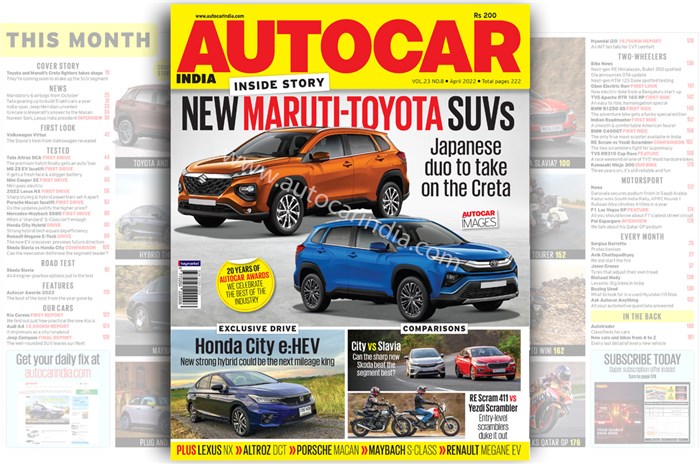 Click here to order the April 2022 issue from Amazon

The April 2022 issue of Autocar India is out on stands now, headlined by inside details of the Toyota-Maruti Suzuki's Creta-rivalling SUV. We also have an exclusive drive of the Honda City e:HEV, which will make its way to India soon. Then there's the 20th edition of the Autocar awards, where we felicitate cars and bikes that we feel grabbed our attention last year. Not to be missed are our first drives of the Mercedes-Maybach S-Class, the Mini Cooper SE, Lexus NX and a drive of the Renault Megane.

Here's what else you can expect from this month's issue:

Maruti Suzuki and Toyota are working on bringing a Creta rival to the Indian market. To read more about what the SUVs will bring to the table, grab the April 2022 issue of Autocar India.

The City goes hybrid, and it's headed to India. We get the opportunity to get behind its wheels for an exclusive drive, and you can read all about it in our April 2022 issue.

We pit the Skoda Slavia against the long-standing segment benchmark – the Honda City – to see if it can rock the latter's foundations. Find out which car you should put your money on.

We bring together the two most affordable scrambler motorcycles on sale in India – the RE Scram and the Yezdi Scrambler. Wonder which caught our fancy the most? Read our April issue to find out.

What do you do when a standard Mercedes-Benz S-Class is, well, standard? We find out if the added tech and refinement are worth paying the premium over the S-Class.

The NX might look like any other Lexus SUV, but don't let its looks fool you. There's updated tech and, of course, the hybrid system. Read more about it in this month's issue.

British carmaker Mini has launched the electric iteration of its much loved Cooper hatchback, and we take it for a spin. But can it electrify us? The answer’s in this month's issue.

The Renault Megane EV could be brought to India as a technological showcase by the French carmaker. We have it to ourselves for a day, and you can read more about it in this month's issue.

We put Skoda's new sedan, the Slavia, through its paces in our road test. How did it fare? Find out in the April 2022 issue of Autocar India.

As is the custom every year, we felicitate the finest automobiles from the year gone by. However, this year was a little special as we also celebrated 20 years of the awards.

We find out if the bike can live up to its name of being the 'master of the road', while decimating miles on the highway.

BMW has launched its C400GT in India, making it the only maxi scooter on sale here. Find out in this month's magazine if it's the one you should be buying.

Formula 1 returns to Las Vegas after a 40-year gap, and this time, the cars would race on the iconic strip. Find out all about the track in this month's issue.