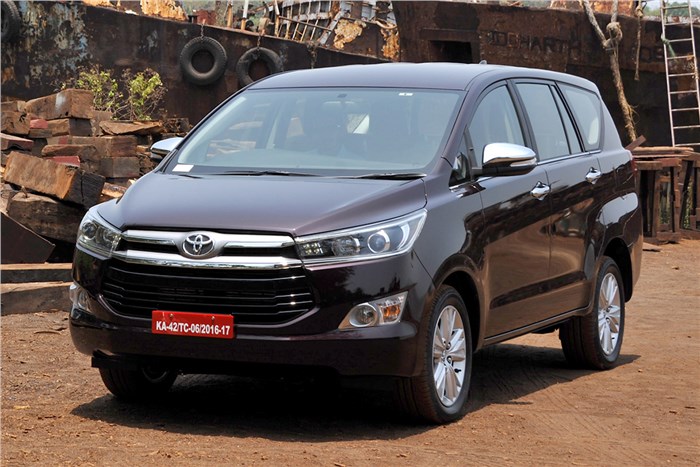 The new Toyota Innova Crysta has just been launched at a starting price of Rs 13.84 lakh for the base trim, going up to Rs 20.78 lakh for the top-end trim (ex-showroom, Mumbai).

With this new pricing, the Innova moves further away from the likes of the Maruti Ertiga and the Renault Lodgy and into a space that's uncontested for now, with only the upcoming Tata Hexa being a possible contender.

Though built on the same platform as its predecessor, the new Innova gets an improved, attractive design and is also longer and wider than the Innova it replaces; this has consequently resulted in an increase in cabin space.

The cabin is a major talking point about the new MPV. The utilitarian theme of its predecessor has made way for a more luxurious and well-appointed cabin with an all-new dashboard featuring multiple trim inserts and an extensive list of features. Toyota has upped the luxury quotient with the inclusion of features such electric adjust front seats, leather upholstery and climate control being available on the top trim level.

Toyota has also improved occupant protection in the new Innova with the top trim featuring equipment such as seven airbags, ABS with EBD and brake assist, stability control and three point seatbelts for all occupants, even for the middle passenger in the third row who gets a three-point harness that spools out from the roof. All varaints get three airbags and ABS as standard.

The Innova Crysta will be offered in the following variants (prices ex-showroom, Mumbai):

The Toyota Innova, during its life cycle, had been subject to multiple upward price revisions, but still managed to attract buyers. And while the new MPV's price tag will shock some, the car does look all set to continue with this success story.