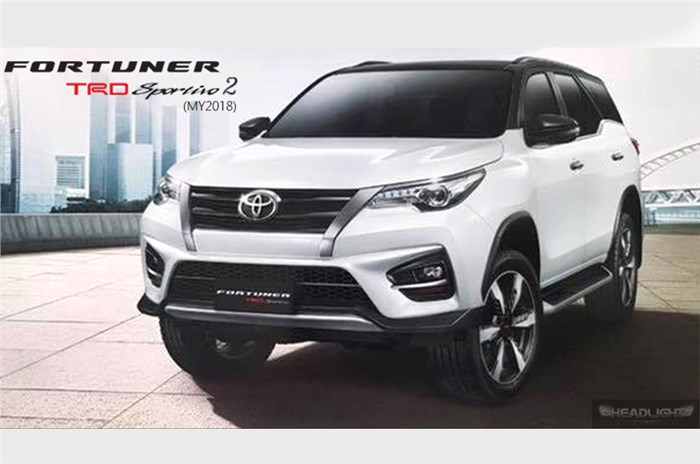 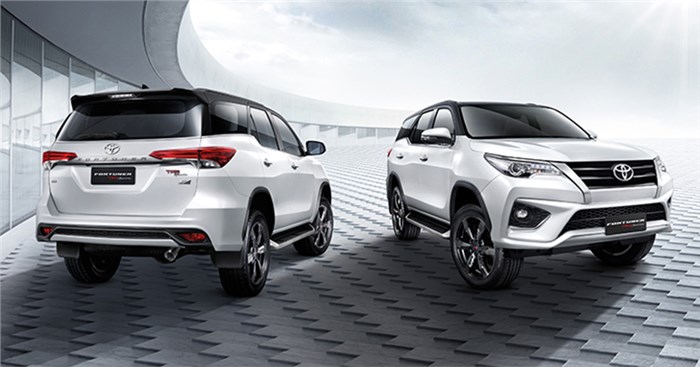 Toyota has revealed an updated version of its Fortuner TRD Sportivo SUV for a launch in the Thailand market later this year. Badged the TRD Sportivo 2, the updated model mostly features cosmetic updates to its exterior.

From the front, a big change is the bumper and grille surround. The previously blacked-out elements surrounding the grille give way to brushed-metal-finished trim while the blacked-out section under the grille is now body coloured. The bumper is new with a lower and wider central air dam with red highlights, a splitter running along the bottom lip and the prominent air vents on either side now house sleeker fog-lamp units and brushed-metal trim inserts.

At the back, the trim running between the tail-lamps gets a brushed-metal finish, too. The bumper is also new with a noticeable, blacked-out lower section. It now features a faux-diffuser look along the lower edge and larger reflectors or rear fog-lamps positioned along the outer edge.

As with the previous TRD Sportivo offered in international markets, the Sportivo 2 features a blacked-out roof and pillars, along with contrast-finished wing mirrors. Completing the look are new dual-tone, 20-inch alloy wheels.

The interior of the Sportivo 2 carries forward the black-and-red affair from the Sportivo. The interior is predominantly black with red inserts on the dashboard, door panels and seat centres. Also carried over are the TRD-badged instrument cluster with red highlights.

Mechanically, the TRD going on sale in Thailand will be powered by Toyota’s 2.8-litre diesel engine with a choice of two drive systems – 2WD or 4WD. The international car also gets tweaks to the suspension.

In India, Toyota has offered the TRD Sportivo variant on the Fortuner. However, this variant is not on sale at the moment. We could expect Toyota to introduce the TRD Sportivo 2 here in the future.