Fight the lockdown woes with 10 of our must-watch videos. 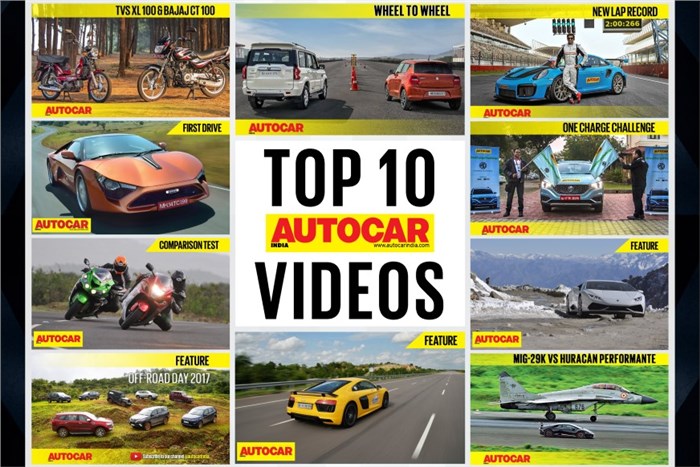 Over the last decade, we’ve produced over 2,000 videos, all of which you can watch on the Autocar India YouTube channel. However, it’s not just new car and bike reviews – there’s a lot more than that. So here are, in our humble opinion, 10 Autocar India videos you simply must check out.

Sure, litre-class superbikes that can go past 300kph are exciting, but what moves the masses are at the other end of the spectrum. As BS6 norms start driving the prices of bikes up, we take a road trip on the country’s most affordable two-wheelers to try and find some joy in simplicity.

Yes, India has made huge strides in the automotive world, with our homegrown carmakers now producing world-class vehicles and holding the reins to other big global carmakers. But making India’s first proper indigenous sportscar? That honour goes to the folk at DC, and the Avanti.

It’s a comparison test many would want to see, yet surprisingly, only few have attempted, the world over. The Suzuki Hayabusa and Kawasaki Ninja ZX-14R may be getting on a bit now, but they are both exercises in excess when it comes to what a motorcycle is capable of. We bring the two together to see which is better.

Everybody loves SUVs, but for the most part, they are kept on the tarmac. But what if you took them off it? The concept is simple – we lined up a handful of AWD, or 4x4-equipped SUVs, and put them through three simple tests in the middle of the Maharashtrian Monsoon. Which ones came out on top? Watch to find out.

You could take a look at any one of our epic drag races (and there are quite a few), but the one that stands out the most is the one between two very unlikely competitors. It’s all about power-to-weight, and a mammoth SUV with a powerful diesel engine takes on a featherweight hatchback with a petrol engine.

5. The highest top speed in India

Top speeds are often quoted but never practically achieved because that requires a long stretch of empty road. Luckily, we managed to get just that and, in the process, set the record for the highest top speed ever achieved in India – with the help of a supercar and a super driver, of course.

We are all about setting records at Autocar India, and this time it is the production car lap record around India’s only F1-grade track, the Buddh International Circuit. Narain Karthikeyan, India’s first F1 driver, set after that record in a car that truly combines track-bred handling with outright power – the Porsche 911 GT2 RS.

Electric cars are here, and though they might not be the norm yet, people have questions. The most important one being about range – how far can these cars go? And so we sought to find out how far we could stretch the MG ZS EV’s driving range beyond its claimed rating of 360km on a single charge.

Lamborghini now has an SUV in its line-up, but back in the days when it didn’t, we decided to drive one of its mid-engine supercars to a place no Lamborghini could even dream of going – Khardung La, the highest motorable pass in the world.

Another great Lamborghini story, and, well, this time, the sky was the limit. Supercars and jet planes are the stuff of dreams, but we brought a Huracan Performante to a runway alongside the Indian Navy’s MiG-29K fighter jet, for nothing short of the wildest drag race ever on Indian soil.

With a supercar as hardcore as the Mercedes-AMG GT R, you’d better have the roads all to yourself.

Imagine calling a taxi, and a supercar arrives? We made that a reality for a few unsuspecting customers.

The S-class is widely regarded as ‘the best car in the world’. We found two others that begged to differ.

If the Tata Nano is an example of Indian ingenuity, turning it into a track racer is a stroke of sheer brilliance.