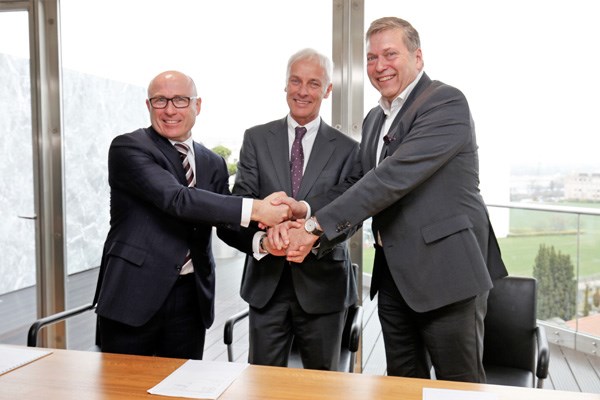 Tata Motors, VW Group and Skoda have officially announced that they are exploring the possibility of a collaboration in order to jointly develop vehicles for the Indian and overseas market. Skoda is set to take the lead on behalf of the VW Group towards development of vehicles for the low-cost vehicle segment. Autocar India had exclusively reported on March 8, 2017 that the carmakers had signed a memorandum of understanding (MoU) to develop a new range of products that'll be shared by Tata, VW and Skoda brands.

The agreement is set to provide significant gains to Skoda which was the first VW Group brand to make a foray into the Indian market in 2001. But when VW came to India in 2007, it was relegated below the mother brand. However, with this alliance, Skoda looks to become the dominant brand in the group once again.

The pact will also help the carmakers in building scale, sharing costs and improving profitability. The MoU was signed by Guenter Butschek, Managing Director of Tata Motors, Matthias Muller, CEO of the VW Group and Bernhard Maier, CEO of Skoda Auto at the Geneva motor show 2017.

One of the key elements of this alliance will be the use of Tata Motors’ advanced modular platform (AMP) which can underpin cars and SUVs of various sizes and therefore result in better economies of scale. For Tata Motors, an alliance with the VW Group will provide access to advanced technology and bring down R&D costs.

“The collaboration will bring their platform, their volumes also on the AMP to leverage the platform to a larger scale which will give us significant cost saving opportunities, improved competitiveness and the chance to profitably grow with the passenger vehicle business and make financially self-sustainable,” Guenter Butschek, CEO and managing director, Tata Motors recently told Autocar India on the sidelines of the Geneva motor show.

Tata Motors recently announced plans to bring down its number of platforms from six currently to just two, and one of them is the AMP. The second platform will be based on Land Rover’s L550 which underpins the Discovery Sport. The models to be based on the AMP will include hatchbacks, sedans, people movers and SUVs. Notably, according to Tata Motors, the commonality between the parts will be as high as 80 percent.

“Economies of scale will come not just from the growth potential in Indian market. Hence the next angle of attack is also an international strategy since future products will be enabled for left-hand-drive markets due to AMP's modular structure,” Butschek added.

Tata Motors plans to launch the first product in India out of the joint collaboration in 2019. This will be a premium hatchback (Code X451) that will rival the Hyundai i20. The X451 could also underpin the next-gen VW Polo for emerging markets and mark the return of the Skoda Fabia to India.

Both Tata Motors and Skoda will detail more guidelines and terms of cooperation in the next few months, according to a company statement.