But Skoda still plans to stay the course for investments and says 'India 2.0' project is on track. 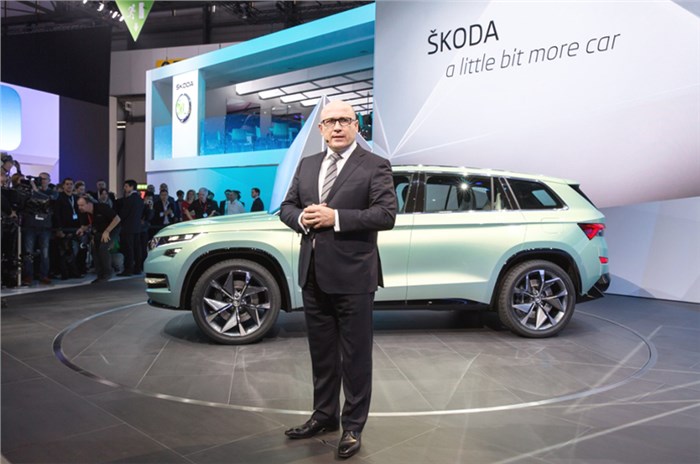 Car sales in India have slumped to multi-year lows and the persisting slowdown has raised eyebrows across the globe. “This was indeed a surprise for us. A year ago, I didn’t expect that this could really happen,” Bernhard Maier, CEO, Skoda Auto, told Autocar India at the 2019 Frankfurt motor show. “In the past, while we did see the Indian market always going up and down a little bit, this year has been a really hard one.”

The country’s passenger vehicle sales plunged to an all-time low of 196,524 units in August, recording a decline of 31.57 percent year-on-year. And without significant revival efforts, the situation could even worsen.

However, the Czech carmaker plans to stay the course for its investments and says the 'India 2.0' project is well on track. "We have not adjusted any of our plans and we strongly believe that India is going to be a future market. We'll give you a glimpse of our first cars under 'India 2.0' at the Delhi motor show next year," Maier said.

He said Skoda understands that a country's economy always performs in a cyclical manner and it's important to be prepared on all fronts to cope with any downturn. "We knew that India is not an easy market. It’s one of the most, if not the most, competitive markets in the world. This is the challenge we like to take," he said.

In fact, Maier even revealed that Skoda is pushing for a higher localisation than earlier targeted. "We made even more progress than we had planned previously. We are now at a level of 92-95 percent. We are happy to have found really good suppliers who are keen to stand by our side," he said.

Last year, the carmaker said it was targeting a localisation level of over 90 percent to boost the cost-effectiveness of its vehicles. VW Group cars have traditionally been built to a higher cost structure in India and this has meant higher prices vis-à-vis the competition. In an effort to make further inroads into the Indian market, the VW Group had tasked Skoda with leading the development of future Group cars for India. At the centre of the VW Group's 'India 2.0’ project is the India-specific MQB A0-IN platform, which will spawn models for VW and Skoda.

Skoda is also banking on the synergies from within group companies to make India 2.0 a success. The Volkswagen Group in India is soon expected to receive approval for the proposed merger of its three business entities in the passenger vehicle business – Volkswagen India Pvt Ltd, Volkswagen Group India Sales Pvt Ltd and Skoda Auto India Pvt Ltd. "With that, we are bundling all the activities happening behind the scenes, such as digital services or accounting, while customer line will be specified and divided by each brand," Maier said. The name of the newly formed organisation is Skoda Auto Volkswagen India Pvt Ltd.