EV’s ultra-capacitor battery charges in a claimed 5 minutes and has an official range of 70km. 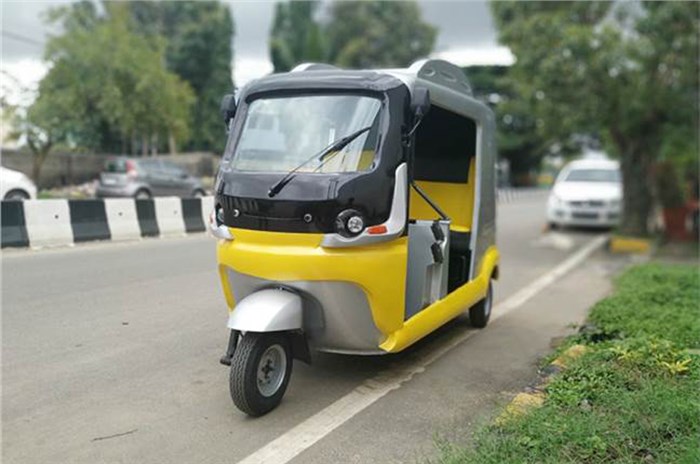 Singapore-based Shado Group has unveiled the Erick instant-charging electric three-wheeler. Developed by Adarin Engineering Technologies, a Shado Group company, Erick is specifically targeted at the Indian commercial market and claims a range of 70km per charge, capability of operating at high ambient temperatures and exceeding traditional petrol, CNG and diesel vehicles in performance.

A key product highlight is the proprietary ultra-capacitor battery, which is claimed to be able to charge in a scant 5 minutes! The Shado Group says its low-voltage, high-performance Electrans powertrain enables commercial use with safer, low-voltage electric motors. Its 'instantly charged' and longer-lasting ultra-capacitor power storage is claimed to charge in minutes, with a 25,000 duty cycle lifetime.

The Erick three-wheeler comes in two variants – passenger and cargo – and, according to the Shadow Group, will equip drivers and fleet owners in India with a powerful, robust transport solution and empower owners to develop – and profit from – their own charging infrastructure.

Dr Saurabh Markandeya, co-CEO and executive director for the Shado Group, says, “Our three-wheelers are able to match and even exceed existing equivalent petrol and diesel engines yet with lower maintenance and zero emissions. The batteries charge in minutes and last 20 times longer than existing electric ones on the market, and do not degrade even in temperatures ranging from -25 to +60 degree Celsius – this is the robustness that Indian owners are looking for. Lastly, the Erick is affordable, costing only Rs 1.50 per kilometre."

The powertrain within the Erick is powered by ‘Electrans’, an indigenously developed electric powertrain consisting of a low-voltage motor integrated with differential and a liquid-cooled motor controller, delivering extreme torque even at low speeds. This means that users can transport heavier loads (up to 500kg) while managing a range of hill slopes without any loss of performance. Electrans, according to the company, may also be used in other vehicle and chassis types. It can also be used to convert existing fossil fuel-powered auto-rickshaws, cars and light trucks.

The ultra-capacitor battery uses di-electric material that does not produce any chemical reaction (unlike traditional lithium-Ion batteries) meaning they last much longer and charge quicker. The battery performance is managed by Shado Group’s proprietary AI-based self-learning algorithm for passive and active balancing, ensuring consistent power output and efficient charging.

​The Shado Group says it is set to invest over USD10 million (around Rs 71 crore) over two years in its factory in Pune, India, with plans to manufacture up to 1,000 units per month for the Indian market. The vehicles are designed and manufactured by the Bengaluru-based Adarin Engineering Technologies following a merger with the Shado Group.

By offering an electric three-wheeler solution that matches or exceeds the performance of equivalent fossil fuel-powered vehicles yet charges in minutes, the Shado Group says it has solved the challenge that traditional EVs face – long charging times. Electric vehicle fleet ownership and management becomes much easier and more profitable when vehicles are not spending hours re-charging; instead Erick’s drivers will be able to access a number of charging options. These include on-grid charging stations in set locations that are connected to the electric grid. They may also access solar-powered mobile charging stations located in car parks, side streets or other easily accessible places within a city.

To drive the creation of a charging ecosystem, Shado Group allows fleet owners and entrepreneurs to invest in the charging stations themselves and allow other owners to charge their vehicles on a ‘Pay-For-Kilometres’ basis. As owners generate profit and expand their charging network we will see the development of a city-wide charging ecosystem that is able to support both Shado and non-Shado vehicles, laying the groundwork for the wider adoption of electric vehicles among consumers.

“We will not see the mass adoption of EVs in India – or Asia – without adequate charging infrastructure” continues Dr Markandeya, “Electric vehicles need to match traditional vehicles in performance, cost and durability, as well as have the requisite charging infrastructure in place. Until now, existing vehicles take too long to charge, are expensive and charging stations are few and far between. By starting with India’s SMEs and entrepreneurs, the Shado Group intends to build out a country-wide charging ecosystem that will go on to enable the widespread consumer adoption of electric vehicles”.

By working with businesses, the Shado Group says it aims to knit together a city-wide charging infrastructure that will spur mass electric vehicle adoption by consumers.